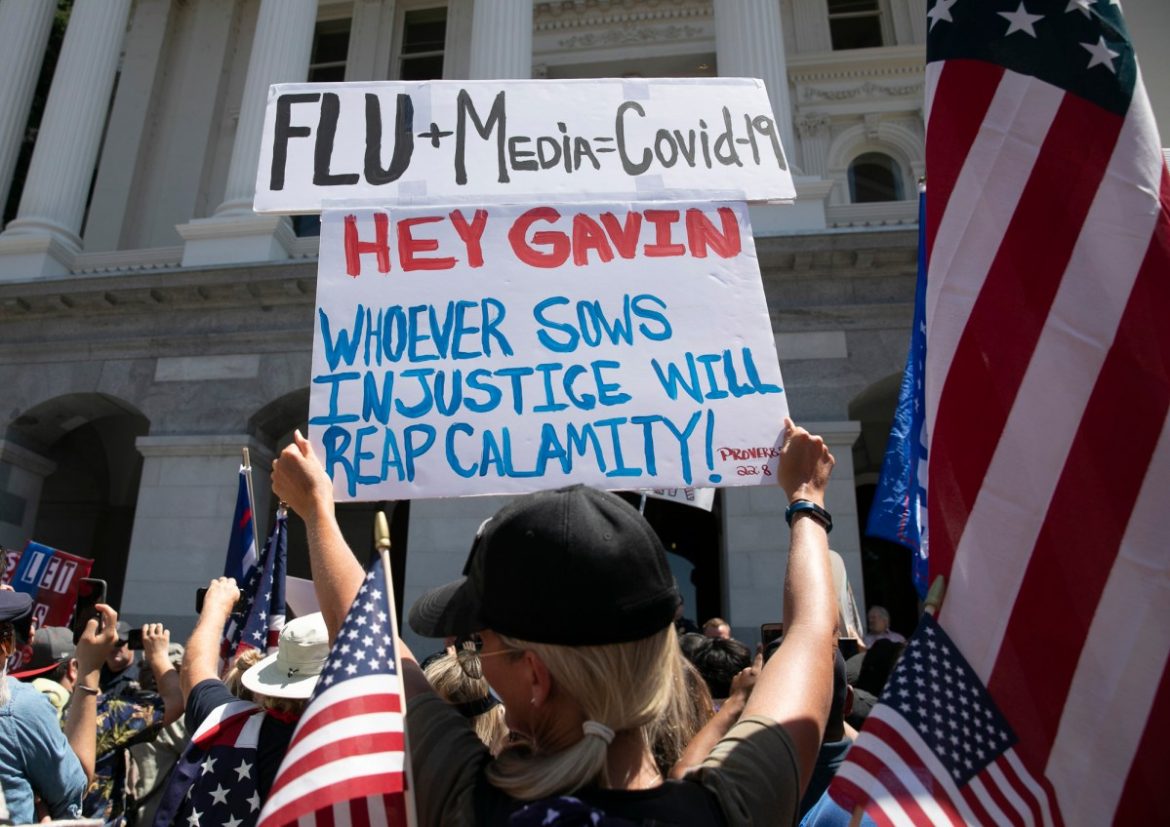 More than a thousand gathered in front of the California Capitol building to protest Gov. Gavin Newsom's stay at home order and demand that the state re-open on May 1, 2020. Photo by Anne Wernikoff for CalMatters

Gov. Gavin Newsom on Monday placed the blame for California’s surging coronavirus rates squarely on the shoulders of “right-wing pundits” and “the folks that are behind this damn recall” — a politically risky move that comes less than two months before the special election to remove him from office.

The comments bookended his announcement that health care workers and state employees must be vaccinated or undergo weekly testing and wear face masks — a policy he also encouraged local governments and private businesses to implement. They also marked a shift in strategy for the governor, whose administration just days ago touted the ability of public education and community-based programs and the vaccine cash lottery to improve inoculation rates.

Instead, Newsom on Monday zeroed in on “the right-wing echo chamber that has been perpetuating misinformation around the vaccine,” accusing Fox News host Tucker Carlson, Wisconsin Sen. Ron Johnson and Georgia Rep. Marjorie Taylor Greene of “profiteering off misinformation” that “comes at a real societal cost.”

Newsom reiterated his remarks during appearances on CNN and MSNBC, and on the latter program he equated recall supporters with anti-vaccine extremists — a recurring campaign tactic that could fire up his Democratic base but nevertheless risks alienating moderate voters.

Newsom also engaged in a Twitter battle with Taylor Greene, who accused him of running “a communist dictatorship.” Newsom, in turn, suggested Taylor Greene was “murderous,” adding, “Your anti-vaccine lies are literally killing Americans.”

Whether this strategy will appeal to the millions of Californians still on the fence about getting vaccinated remains to be seen. Then again, it’s unclear how completely any strategy would succeed. Though health care experts, local leaders and some influential unions voiced their support for the new vaccine policy, one of the state’s largest health care unions appeared to be lukewarm on it. Other approaches have had similarly lackluster responses. For example, California has funded 155 pop-up vaccine clinics at more than 80 McDonald’s restaurants, but has administered an average of just 16 shots per event.

California has administered 43,501,625 vaccine doses, and 62.1% of eligible Californians are fully vaccinated.