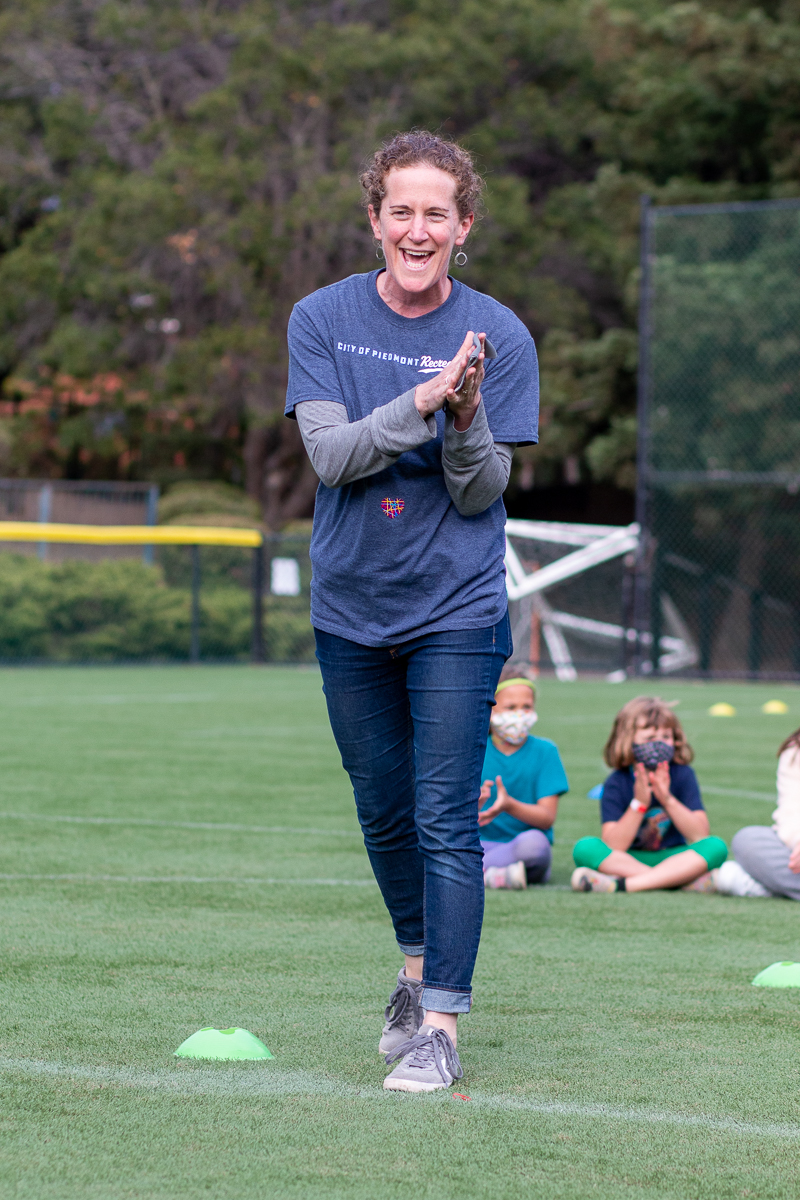 On Tuesday, July 20, the Piedmont Recreation Department held their second Try (It) Out Tuesdays event led by Recreation Supervisor Eva Phalen and Sports Coordinator Steven Chavarria. This week, girls and non-binary kids ages 5-12 got the chance to try flag football and volleyball with Piedmont coaches.

Phalen, who was hired to the Piedmont Recreation Department this June, was inspired to create the Try (It) Out Tuesdays series after hosting a similar event with her previous job at the City of Albany. The event, titled Play Like A Girl, featured over 20 sports for girls to try out.

“When I came to Piedmont, that was definitely something where everyone’s eyes lit up and asked if we could bring the event here,” said Phalen.

According to Phalen, the department is planning a similar event to take place in May 2022, with sports ranging from skateboarding and lacrosse to fencing and soccer. While planning the larger event, Phalen and Chavarria realized they could host a smaller series of events this summer to get girls excited about trying out new sports.

According to Phalen, the Piedmont Recreation Department is strongly committed to promoting girls in sports because of the many associated benefits such as better grades, self-confidence, and leadership abilities. They are also trying to combat a trend where girls’ participation in sports drops off in middle school.

“When you are in it you feel good, you are with your girls, there’s girl power, there’s endorphins that are kicking in. But the long term effects are that we are creating leaders,” said Phalen.

So far, the turnout has been great: the first event had 42 girls, while tonight’s event had over 50 sign-ups.

“What I saw last week was girls signing in and running off to play with no hesitation at all. In my mind, that would be very different if it was a co-ed sport,” said Phalen.

Cammy Green, a parent of one of the girls participating, agrees about her own daughter Mavis.

“My daughter is 6, and the access to sports is a little bit limited at her age,” said Green. “She’s mostly on co-ed teams right now and can get intimidated. Last week at this event she was super engaged which was awesome.”

Green encouraged her friend and fellow parent Zeena Fakoury to attend with her daughter Dalia as well.

“There’s not as much out there for young girls as there is for boys,” said Fakoury. “This event is nice that younger girls can be involved and get exposure to certain sports, and not limit it to traditionally girls’ sports.”

Fakoury and Green both emphasized the importance of creating events where a range of ages are included.

“It’s a big thing for little girls to see what bigger girls are doing and emulate it,” said Green. “It’s part of how [my daughter] learns: watching older kids and helping younger ones. She loves it.”

Fakoury and Green also appreciated having an event specifically encouraging girls to get involved in sports.

“It’s a message of inclusion for everybody and that girls can do anything that boys can do,” said Fakoury.

Another parent, Mary Cvet, came with her 7-year-old daughter Isla in the hopes of trying out new sports to see what might interest her.

“Kids change their minds so frequently that by the end of the year they’re into something totally different,” said Cvet. “The option to expose them to multiple sports in small doses is a great way to figure  out what they like.”

From “girls” to “girlx”: A commitment to inclusivity

When marketing the event, Phalen intentionally decided to create the event for Girlx. According to the City of Piedmont website, the spelling with an x centers around inclusivity and equitability to ensure that all kids who are female and non-binary feel welcome.

“We’re trying to be as inclusive as possible and that comes down to gender as well as race, age, and every demographic,” said Phalen. “Besides it being important to us, I think it is important for everyone to feel welcome and to be included and feel like they have a place here in Piedmont.”

Phalen is proud of how the events have turned out so far and looks forward to continuing similar events in the future.

“The feedback from last week’s event was glowing in the sense that it was a win-win-win for the coaches, the girls, and the parents. The energy was palpable,” said Phalen.

Phalen said she would be happy to be a resource for others hoping to create similar events. Her information can be found on the City of Piedmont website.

“This isn’t something that’s only for Piedmont. It’s open to anyone in the Bay Area and we hope that it’s contagious, that it spreads to other cities as well,” said Phalen.