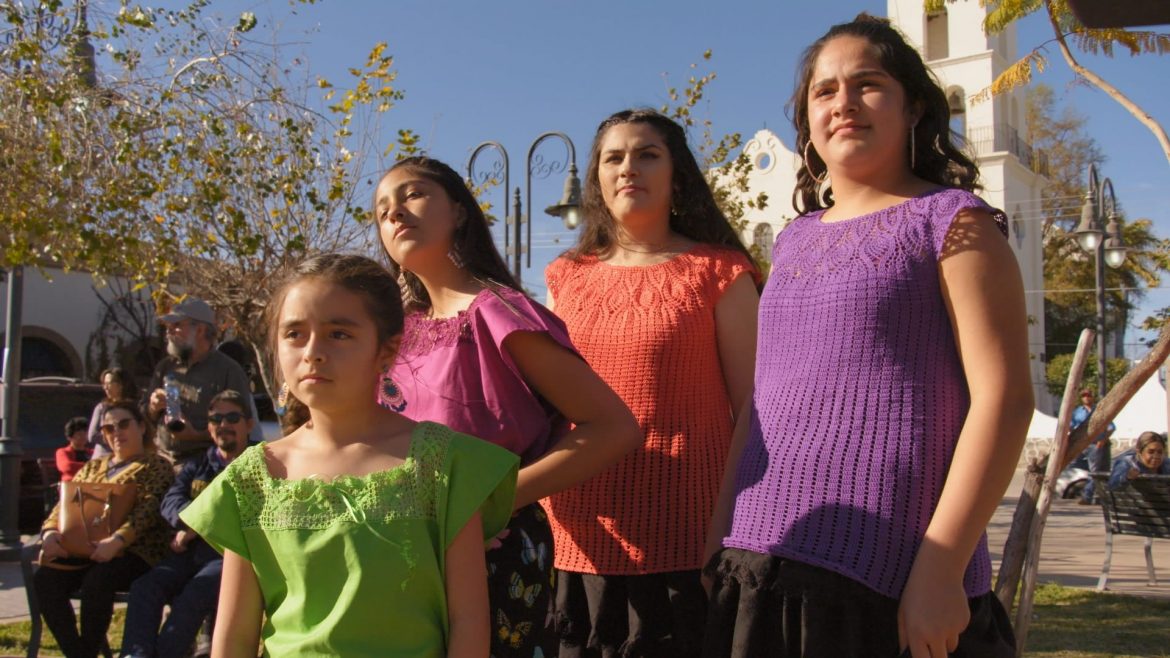 What’s in a name? How tightly can a song, minutes made of just words and rhythm, bind members of a community together? What is revealed in a dance honed by tradition?

Mexican American singer Linda Ronstadt was born in Arizona with a German surname, but she embraced and found refuge, never mind immense international success, by embracing her Mexican identity. Her grandfather was born in the town of Banámichi in Sonora, Mexico, and it is an international trip to this ancestral home that drives the on-the-road documentary known as “Linda and the Mockingbirds,” interspersed with performances and personal stories that tie into national stories of gentrification, immigration and identity.

Ronstadt plays herself, obviously, but “The Mockingbirds” refer to the multigenerational community center, performance academy and band based in San Pablo known as Los Cenzontles (“The Mockingbirds” in Nahuatl) that she asked to join her on this pre-pandemic journey of self-discovery and community building.

This Sunday, “Linda and the Mockingbirds” will screen at the Roxie Theater in San Francisco, the first live screening since its October 2020 release online thanks to the McEvoy Foundation for the Arts. Besides Linda’s story, members of Los Cenzontles share their personal histories of identity-building, hopes for cross-cultural collaboration and perform with instruments, songs and dances native to Mexico and the cultures of its people.

The founder of Los Cenzontles, musician and educator Eugene Rodriguez, met Ronstadt while on a trip to Veracruz, Mexico, with a group of students in 1993, but had started the organization as a youth group program back in 1989. It was, at the time, an opportunity for Mexican American children born in the Bay Area to reconnect to their families’ cultural legacies through music, language and performance. Rodriguez, who was born in Los Angeles, calls it his calling.

“The issues of culture have been important to me personally; I was always very drawn toward it. We weren’t necessarily only preparing children to be onstage, but really dealing with culture in a bunch of deeper ways,” he says. “Growing up Mexican American, you don’t really see yourself in popular culture, with some exceptions. When I started working with kids, it was fulfilling a lot of my own personal interests, connecting to my own family traditions. I felt that it was something that I wanted to do, to work with the community.”

In 1989, Rodriguez received a California Arts Council artist residency in Richmond and hit the ground running. Soon, the kids he worked with were recording cassette tapes, traveling internationally for shows “in the jungle” and learning the regional music genres and dance forms.

But just as Los Cenzontles was growing, the North American Free Trade Agreement skewered the socioeconomic relationship between the United States and Mexico, eliminating millions of jobs and thousands of small businesses in Mexico and in turn prompting the eventual migration of millions of Mexican citizens into the United States over the next several years. Suddenly, the kids showing up to class weren’t just locals, and needed a space that was familiar and safe.

“When I started working with kids in enrichment, most of them were English-speaking, American-born. Then in the ’90s, we witnessed a big influx of immigrants, with a whole different relationship to Mexican culture,” Rodriguez says. “In a way, we documented a time in history that we often don’t. We often don’t consider, when we talk about issues of migration and demographic shift, [the perspective] from inside the community that’s being most affected.”

Within a year of incorporating the organization into the Los Cenzontles Mexican Arts Center, and renting out the San Pablo Civic Center for classes, word had spread. Hundreds of students showed up the first week to learn, often from former students themselves who were transitioning into mentorship roles; most of Los Cenzontles’ students, Rodriguez says, often commit to multiple years of study, and the band is largely composed of adult alumni. They began releasing CDs in 1995, and the album “Papa’s Dream” by Los Lobos and Lalo Guerrero, produced by Rodriguez and featuring multiple Cenzontles members, was nominated for a Grammy.

And from there, decades of steps, songs and memories, innumerable performances, dozens of albums that explored purepecha, traditional mariachi, sones abajeños, all the genres you don’t yet see on the Top 40. A timeline on the Los Cenzontles website documents the high points of these last 30+ years, peppered with archival videos and photos. For Rodriguez, self-documentation is a “constant effort,” but one that both encourages the kids to do their best and allows everyone to ruminate on all that they’ve accomplished.

While “Linda and the Mockingbirds” wasn’t the first documentary Los Cenzontles was a part of, it was one of the last, and largest, trips the group was able to take before the pandemic put the world on pause. Thanks to that fateful afternoon busking along the road nearly 30 years ago, Ronstadt stumbled upon Rodriguez and his youth performers, and was so taken that she would go on to support their next trip and keep in touch to this day. She was able to leverage CNN producers to share in the filmmaking process with Rodriguez’s crew, in what he calls a wonderful compromise.

“We took 22 members of our organization down at ages 8 and up, and it was quite, quite an ordeal,” he says. “These are relationships that continue to this day. Everything has been very organic; it’s very, very fruitful.”

One of those members was Verenice Velazquez, a Bay Area native and UC San Diego graduate who has been with Los Cenzontles since her mom enrolled her in a dance class 15 years ago, when she was 7. It was the highlight of her week, and she eventually learned to play percussion and string instruments, later serving as an administrative and teaching assistant in the summers. When she got the call about the film, it was a no-brainer, even with finals.

“I was in my dorm studying, and he called me asking me if I wanted to go on a trip with Linda Ronstadt to Sonora, and I was like, ‘Oh my God, yes,’” she says. Even if I have finals, I can still do it!”

Velazquez graduated remotely in 2020 and has worked with Los Cenzontles through the pandemic. She attributes her mother’s pride in her Mexican culture for connecting her with Los Cenzontles, and the center for helping her embrace all aspects of who she is. She’s eager to put her degree in urban studies and planning to good use, drawing on what she’s learned throughout her life growing up in the East Bay. She’s even working on a song of her own.

“It’s a place where I strengthen, or just practice, my love for my culture,” she says of Los Cenzontles. “I have a very strong cultural identity starting from home, and the center is a place where I can grow it and practice and learn more. Through music and trips that we took and workshops that we would give, I have learned more about the connections between different communities and different cultures.”

Despite the pandemic forcing the organization into a virtual model and having to cancel shows and trips, Rodriguez feels good about the rest of 2021. The kids are still learning, still strumming, still showing up to do the work.

“People continue to be born, and you never quite know what their perceptions are because they’re new and they’re not new. We’re just trying to provide a constructive opportunity for them to work together, and then hope that it contributes to a sense of responsibility, communication, something to work with as they go forward in life.”