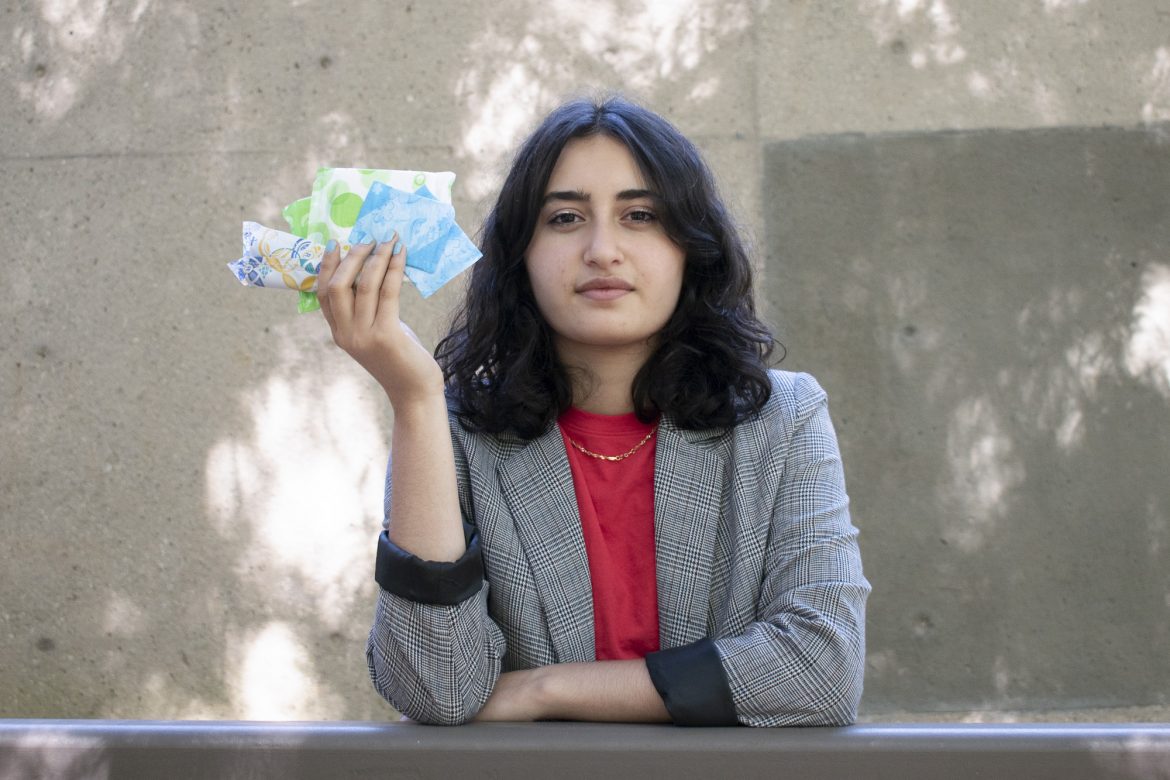 “People are surprised, or they think it’s a radical idea, but it’s not a very radical idea because it’s a basic need,” Leung said.

Leung started advocating for better access to menstrual products when a friend got her period during class and couldn’t find any tampons or pads. Leung said the embarrassment their friend experienced was a familiar feeling to them, and one that often forces students to choose between hygiene and dignity or staying in class.

In 2017, Leung founded Free The Period, a student group working to make period products accessible on campuses across California. The group was behind a pilot program at UC Davis, which provided products free of charge in 24 restrooms on campus.

Similar campus initiatives across California have come and gone. With many students still recovering from the economic impacts of the coronavirus pandemic, Leung says now is the time for legislative action.

Free The Period and other student organizations are now backing a bill in the California Legislature that would require California State University, the California Community Colleges and public schools that serve grades 6-12 to provide menstrual products free of charge in designated places on campus. The bill also strongly encourages the UC and private universities to do the same, since the legislature cannot legally mandate those institutions.

“It’s really a question about gender equity and basic human dignity,” said Jason Chen, a freshman at Stanford University and chair of the Empowerment Collective, a California student group lobbying around policies that affect young people. “As a non-menstruating individual, I don’t have to worry about where my toilet paper is going to be or if I’m going to have access to toilet paper when I’m in the bathroom.”

While five states, including California, currently have laws requiring public schools to provide free menstrual products, Assembly Bill 367 would be the first in the nation to include colleges and universities. Spokespeople for the California Community Colleges and California State University said that the systems have no official stance on the bill. As of press time, the University of California had not returned a request for comment.

College students in California have sought to bring attention to menstrual equity on their campuses for years, forming teams and lobbying administrators for funding to provide free, convenient pads and tampons.

“I think not just in California, but everywhere is this idea that we’re not supposed to talk about it, that it’s taboo,” said Assemblymember Cristina Garcia, a Democrat from Bell Gardens who introduced the bill. “We legislate on experience, and the vast majority of (legislators) don’t menstruate, and the people that menstruate around them hide it from them.”

This isn’t the first attempt to require colleges to supply free menstrual products to students in California. A 2017 bill, also introduced by Garcia, initially included colleges and universities, but they were cut from the final law due to budgetary concerns. Instead, the legislation that passed focused on low-income schools serving grades 6-12.

One challenge facing any menstrual equity law is enforcement. An analysis of the 2017 law from the California Commission on State Mandates found that only 20% of the low-income schools required to provide menstrual supplies submitted claims to the state for reimbursement. This likely signifies that the products were never supplied, supporters say. Leung says the current bill will clarify requirements by making it a blanket rule for all schools with certain grade levels.

The bill attempts to solve period poverty — when someone cannot afford menstrual products.

A January 2021 study published in the journal BioMed Central found that nearly 15 percent of female college students in the United States have experienced period poverty in the last year. The study also links period poverty to mental health challenges, such as depression, noting that menstrual health has long been ignored as a basic element of hygiene.

Dr. Jhumka Gupta, a researcher at George Mason University and an author of the study, said AB 367 is a first step in addressing menstrual equity, but its implementation is also important to watch. If the bill is enacted, she said it’s important that people who need free period products the most receive them.

“We know from my study that Black, Latinx, immigrant and first-gen women are reporting more period poverty,” said Gupta. “Once the bill is passed, menstrual products are available, are we reaching those that we need to reach the most?”

The bill initially required period products to be made available in 50% of campus restrooms, but was amended in the Assembly appropriations committee to say they must be dispensed at a “designated and accessible central location on each campus.”

Cost savings could be one reason for the change. A committee analysis estimated that in addition to $3.3 million to install dispensers and provide products for K-12 schools, there would be a one-time $7.5 million cost to install or modify dispensers across the three higher education systems. That’s on top of annual expenses of $3.4 million for California Community Colleges, $765,000 for CSU and $450,000 for participating UC campuses, the analysis found.

But the change raised red flags for advocates because they said it would exclude trans or non-binary people, and limit the general accessibility of the products, since the original language of the bill required products to be available in women’s, all-gender and men’s restrooms.

“If you’re a new student and you were not very familiar with the campus and you start your period on your way to classes, then how far is it going to take you from point A, where you are starting out, to point B, wherever that one centralized location on campus is?” said Jenn Galinato, a pre-law student at Sacramento City College.

Garcia added that the change was “concerning” since it requires less than what some colleges are already doing. Still, Garcia said she was inspired by the hard work she’s seen from students on the issue.

“Our biggest advocates have been young students, or young people in general who have been embracing this discussion and holding legislators accountable, saying, ‘This is important, and do not ignore us. Do not ignore this issue,’” she said.

Garcia said colleagues and constituents started referring to her as the “Tampon Queen” because of her history of authoring menstrual equity bills, but she prefers “Period Princess.” In addition to authoring the two bills addressing period product availability in schools, she has supported suspending the state tax on menstrual products. Former Gov. Jerry Brown vetoed an attempt by the Legislature to do that in 2016, but the current state budget suspends the tax through the end of this year.

Advocates say the pandemic has made period poverty a more urgent matter. The economic strain of the pandemic has left many students in need of greater access to basic necessities, including period products. Some campus food pantries are able to provide pads or tampons to students, but they often operate on set hours or rely on community donations, which doesn’t make them reliable throughout the day.

“More people are deciding between putting food on the table or buying pads and tampons,” said Amanda Safi, a University of California, Santa Cruz freshman and founder of The Period Equity Project in San Mateo County, an initiative to provide menstrual products free of cost to people who can’t afford them.

Galinato said community college students especially will benefit if the law passes. “I’ll be really frank about this: We don’t get as much resources as… the CSU and UC systems,” she said.

Community college students need an education that’s affordable, she said, and if colleges can provide period products, “that’s one less thing that students have to worry about.”

The Student Senate for California Community Colleges passed two resolutions to promote menstrual health and equity earlier this year, one of which Galinato co-authored.

The Cal State Student Association voiced their support for AB 367 in a statement, saying it “is in the best interest of CSU students. All students, regardless of sex and gender, should have the ability to attend classes and not worry about accessing menstrual products.”

If the bill passes, schools would have to comply by the 2022-23 school year. It unanimously passed the Assembly and is currently under consideration in the Senate appropriations committee.

Forschen is a fellow with the CalMatters College Journalism Network, a collaboration between CalMatters and student journalists from across California. This story and other higher education coverage are supported by the College Futures Foundation.