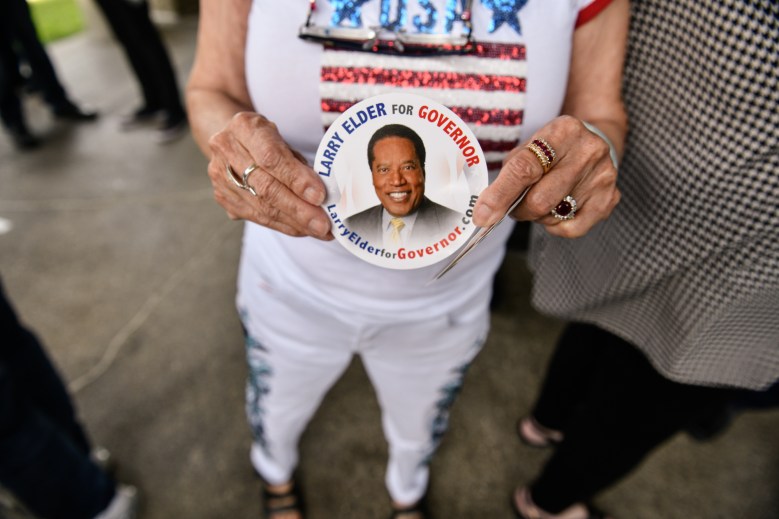 Larry Elder is in, because a new tax return requirement is out.

The conservative talk radio host will appear on the ballot as a candidate to replace Gov. Gavin Newsom in the Sept. 14 recall election, a judge ruled today as she determined that a state law requiring that candidates submit five years of tax returns does not apply to recalls.

The ruling by Sacramento Superior Court Judge Laurie Earl marked a curt conclusion to a question that’s lingered — unchallenged until this week — ever since Newsom argued in May that candidates seeking to replace him in the recall would have to submit five years of federal tax returns. The requirement stems from a law Newsom signed in 2019 that says gubernatorial candidates must submit their tax returns in order to have their names appear on a “primary election” ballot.

But the recall is a special election, not a primary, and legal experts CalMatters interviewed in May said the new law should not apply to the recall.

Secretary of State Shirley Weber, however, announced in June that candidates seeking to replace Newsom would have to turn in their tax documents. Dozens of them did so by the Friday deadline, and Weber’s office published 1040s and various schedules from 40 candidates on its website.

Elder — an attorney who is well-known for his conservative commentary on television and radio, and in newspaper columns and books — was not among them. Weber’s office told him that he had not properly submitted his tax returns, and was therefore not eligible for the ballot.

The 69-year-old Republican sued, arguing that he had submitted the documents and that if he made any errors in redacting them, they could be corrected by the secretary of state. Additionally, he argued, the law on candidate tax returns applies only during a primary election, not a recall.

Weber’s attorney argued that the tax returns requirement should apply because recall elections should be held “in a manner as close to a regular election as possible.”

But Judge Earl didn’t buy it. During a brief hearing, she ruled in favor of Elder and said the tax return requirement does not apply to a recall.

Elder, a late entrant to the race who has rapidly raised $434,000 — less than former San Diego Mayor Kevin Faulconer, but more than reality TV star Caitlyn Jenner — has used the lawsuit to boost his image as a political outsider.

“We fought the shenanigans of Sacramento’s politicians and we won,” he said in a statement after the ruling. “If elected governor, I will fight every single day for this state. This is just the beginning.”

Besides Elder, three other candidates were kept off the ballot solely due to the tax return requirement, according to letters released by the secretary of state. They will be on the replacement candidates list as well:

Weber’s office will comply with the ruling, her spokesperson said, and does not plan to appeal. The office issued a final certified list of 46 recall candidates tonight.