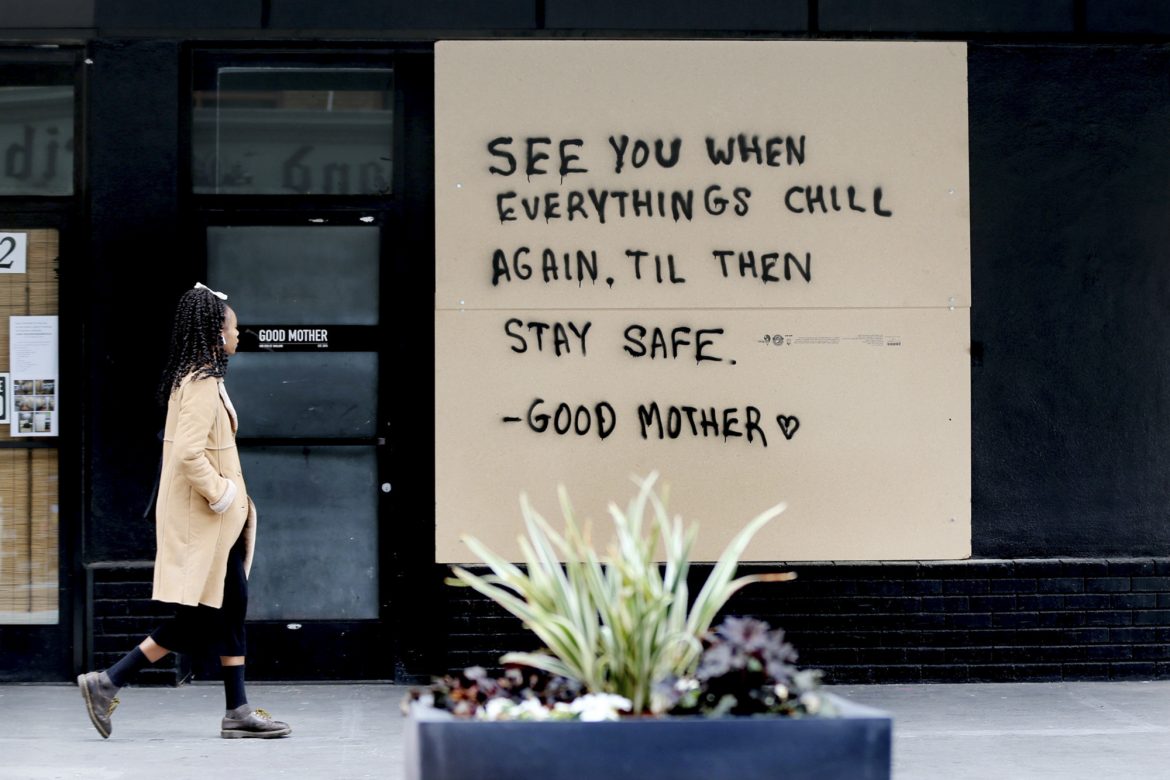 A pedestrian walks past boarded up windows of a business on 13th Street in Oakland, Calif., during the eight day of shelter-in-place order to reduce coronavirus spread on Tuesday, March 24, 2020. (Ray Chavez/Bay Area News Group)

Sacramento County on Thursday became the third to mandate face masks indoors regardless of vaccination status, a day after the state recommended the same due to the surging Delta variant — and just a little more than a month after California lifted its mask mandate for fully vaccinated residents.

San Francisco is also considering an indoor mask requirement and a vaccine mandate that could extend beyond city employees — which would go further than Gov. Gavin Newsom’s recent announcement that health care workers and state employees must be vaccinated or undergo weekly testing. President Joe Biden on Thursday adopted a similar policy for federal workers — of which California has the most outside of Washington, D.C.

Also Thursday, a federal judge implied Newsom’s policy didn’t go far enough and said he would consider ordering all California prison employees and inmate firefighters to be vaccinated. Los Angeles Unified School District said it will require all students and employees who return to campus in the fall to undergo weekly COVID-19 testing regardless of vaccination status — a rule that previously applied only to the unvaccinated. San Francisco Mayor London Breed said the Delta variant could possibly derail the city’s return to in-person learning. Major California-based companies, including Apple, Google and Twitter, postponed office reopenings.

And a whopping 36 of 58 counties now have coronavirus case rates that would have catapulted them into the most restrictive purple tier of California’s now-extinct reopening blueprint — up from 12 last week.

Kyle told CalMatters’ Ana Ibarra that mixed messaging is likely complicating the state’s efforts to improve vaccination rates, especially in underserved communities. Ana found that just 45% of eligible Californians enrolled in Medi-Cal, the state’s health care program for the poor, had received at least one vaccine dose as of July 18 — compared to 70% of all eligible Californians.

Still, California’s first-dose vaccinations for the week ending Monday increased 21% compared to the previous week, according to the Sacramento Bee — a sign that residents are heeding health officials’ warnings about the Delta variant.

In any case, the state plans to reassume control of vaccine distribution. Blue Shield, the health insurance giant California tapped earlier this year to streamline a confusing patchwork of vaccination efforts, will soon transition to “an advisory role,” with its contracts scheduled to end “in the coming months,” according to slides from an internal Wednesday meeting between the state Department of Public Health and vaccine providers first obtained by CalMatters’ Barbara Feder Ostrov.

California has administered 43,772,466 vaccine doses, and 62.4% of eligible Californians are fully vaccinated.