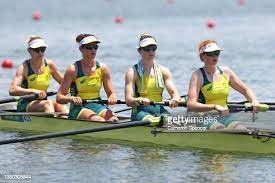 Former Cal rowers Sydney Payne and Rosemary Popa each won a gold medal during the first week of the Tokyo Olympics. They were but two of nearly 100 athletes with East Bay ties scheduled to compete.

Payne was a member of the Canadian women’s eight that claimed the gold medal on July 29. The Canadian team finished the race in five minutes, 59.13 seconds, beating out New Zealand, which finished in 6:00.04. China finished third in 6:01.21.

Kara Kohler, a product of Clayton Valley High School in addition to Cal, finished third in the B final of women’s single sculls on July 29.

Valerie Arioto of Foothill High School helped the United States softball team to a silver medal. The Americans fell to host Japan 2-0 in the final on July 27.

Ryan Murphy, another Cal product, took a silver medal in the men’s 200-meter backstroke on July 29. Murphy finished in 1:54.15, behind the Russian Olympic Committee’s Evgeny Rylov, who finished in an Olympic record 1:53.27. Murphy then made waves complaining about doping at the Olympics. Russian athletes are competing for the Russian Olympic Committee because Russia was banned for state-sponsored performance-enhancing drug use at prior Olympics. The ban is symbolic as hundreds of Russian athletes are still at the Olympics.

“It is a huge mental drain on me to go throughout the year that I’m swimming in a race that’s probably not clean,” Murphy told reporters in Tokyo.