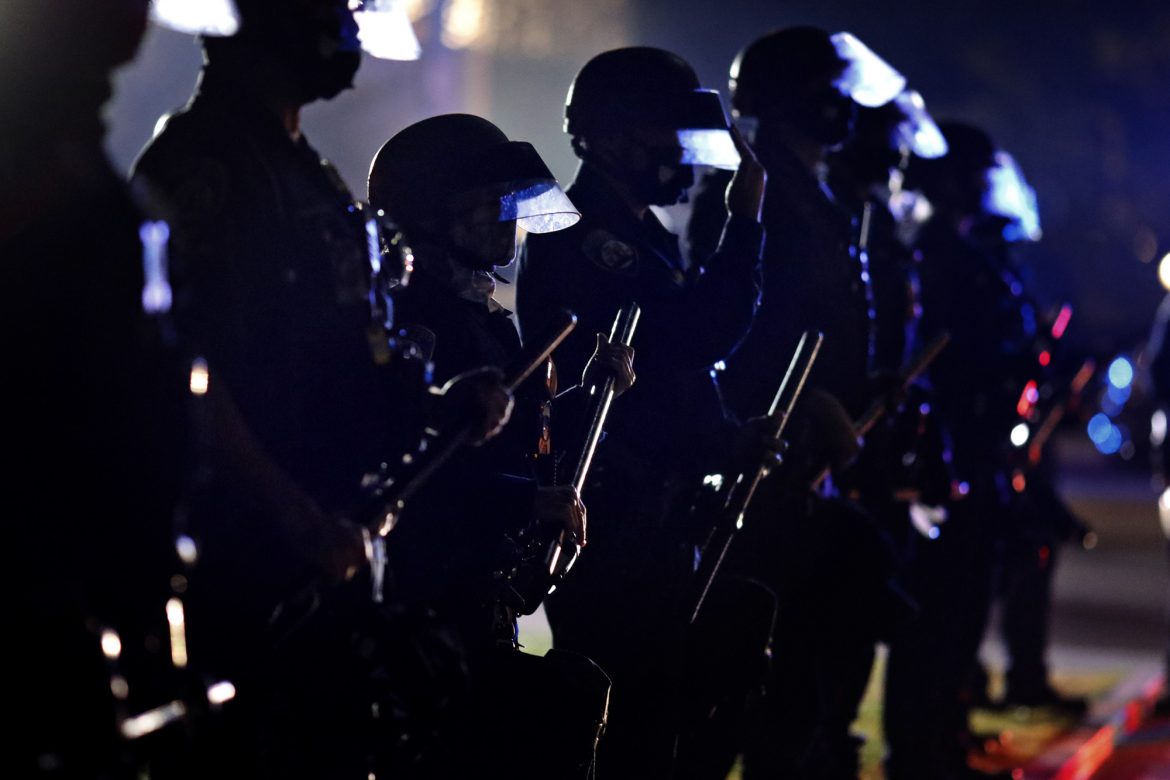 Police hold their clubs as they form a line in front of supporters of President Donald Trump on Election Day in Beverly Hills on Nov. 3, 2020. Red states such as Florida and Georgia lead the way in decertifying officers with past problems, while there is no decertification in two of the bluest and biggest in the country – California and New Jersey. Photo by Ringo H.W. Chiu, AP Photo

On a Wednesday afternoon in April 2018, Gardena police officers got a  “triple beeper” over their radios — three high-pitched squawks signaling an emergency. As many as 20 shots reportedly had been fired near a local park.

“That kind of gets you a little adrenaline squirt going,” Gardena Police Officer Michael Robbins would later tell investigators.

In minutes, a25-year-old Black man, Kenneth Ross Jr., was dead — shot twice and killed by Officer Robbins as he ran past Rowley Park. Police said a gun was found in the dead man’s shorts pocket, and Robbins would later be cleared by local authorities of any wrongdoing.

But the case was far from over.

What happened on April 11, 2018 — which led to immediate cries for police accountability and demonstrations — is now a centerpiece of a bill that is arguably California’s biggest criminal justice proposal this legislative session.

The bill would allow California to decertify police officers for misconduct — effectively stripping them of a license to work in law enforcement and kicking them out of the profession. California is one of only four states in the country without such power. As a result, a number of high-profile cases have been reported over the years where an officer involved in a questionable shooting was allowed to remain on the streets, only to kill again. Officers also have been fired for wrongdoing in one department, then quietly moved on to another agency.

“California is able to revoke the certification or license of bad doctors, bad lawyers, even bad barbers and cosmetologists — you can even recall an elected official — but is unable to decertify police officers who have broken the law and violated public trust,” state Sen. Steven Bradford said at a committee hearing earlier this year.

Bradford, a Gardena Democrat who chairs the public safety committee and lives near where the shooting took place, introduced the bill along with Senate President Pro Tem Toni Atkins.

In the Gardena shooting, local law enforcement — as it typically does in such cases — investigated the shooting. The district attorney’s office cleared Robbins of wrongdoing because it said the officer believed the man running away from him was armed and might reasonably have feared for his life

But criminal justice reform advocates say for too long police accountability has been solely in the hands of local agencies — police policing themselves. They question if the man Robbins shot in the back was truly a threat running away and point out it was the officer’s fourth shooting, suggesting he was too quick to use deadly force.

Bradford’s bill is the latest effort to break through the wall of legal protections built up over the years that critics say shield California law enforcement officers from accountability. CalMatters was only able to obtain internal police reports and videos regarding the Gardena shooting because a 2018 law for the first time opened certain law enforcement records, including files pertaining to use of deadly force and some misconduct. Another law that went into effect this year requires the state attorney general’s office to handle investigations regarding police killings of unarmed civilians.

“This nation has cried out — especially in Black and brown communities — for change,” Bradford told CalMatters, ticking off a list of high-profile police killings and use of force incidents from Stephon Clark in Sacramento to Oscar Grant in Oakland to Rodney King in Los Angeles. “It’s definitely overdue.”

But there’s still work to be done, he added.

“It’s one thing to pass legislation. It’s another to change the mindset and internal training and operations of law enforcement,” Bradford said.

And his bill is far from certain, as police associations and chiefs from around the state have signaled their opposition.

“No one wants to see bad officers removed from law enforcement more than good officers do,” said Brian Marvel, president of the Peace Officers Research Association of California, in a statement to CalMatters.

“When an officer acts in a way that is grossly inconsistent with the missions and goals of our profession, it tarnishes the badge and the great work being done day in and day out by officers keeping our families and communities safe.”

But he added that the bill as written creates a “biased and unclear process for revoking an officer’s license.”

The bill would create a new division within the state’s Commission on Peace Officer Standards and Training to investigate or review possible misconduct. A nine-member advisory board would consider the evidence and recommend whether to strip an officer of certification. The majority of that board would be civilians without policing experience, including four members who would be experts on “police accountability” and two who either personally suffered from an officer’s use of force or lost a loved one to such an incident. The commission would have final say on decertification,  but language in the bill suggests they’d be expected to adopt the advisory board’s recommendations when reasonably supported by evidence.

As for what constitutes wrongdoing that could cost an officer their career, it’s unclear. The bill includes categories such as sexual assault and dishonesty but would leave it to the commission to develop a full definition of “serious misconduct” that also includes broader areas such as “abuse of power” and “physical abuse.”

“We all want to see a fair and transparent decertification system put in place that permanently removes officers for serious misconduct, but even with recent amendments (the bill) fails to create a balanced and even process,” said Abdul Pridgen, president of the California Police Chiefs Association, in an email to CalMatters. “However, we remain committed to continuing our work with the Governor’s office, legislative leaders, and Senator Bradford to address our remaining concerns and establish a decertification process we can all have faith in.”

Among the sticking points for the association is the makeup of the advisory board, the degree to which that board’s recommendations are binding and what will happen if a local department exonerates an officer but the state commission finds wrongdoing.

A decertification bill failed last session. The current bill made it out of the Senate but not without changes. The initial version had made it easier for civilians to sue officers for misconduct, but that language is largely gone.

More recent amendments reduce the role of the advisory board. Bradford’s spokesperson said those changes were made after working with the governor’s office and key lawmakers. The original bill gave the advisory board the power to direct the commission to investigate certain officers. The new version, however, simply says the board can recommend investigations. It also drops a licensing fee on officers.

Police unions have been donating to some Democrat lawmakers who could play a role in forcing further changes — news that prompted a sharp tweet from Sen. Bradford accusing opponents of trying to “kill solid policy.”

“If you can’t win on the merit of your argument, you resort to paying off legislators?? SHAMEFUL, BUT NOT SURPRISING!!,” he tweeted.

“They’re trying to duck accountability time and time again,” said Sheila Bates, a member of the Black Lives Matter Los Angeles policy team and part of the coalition co-sponsoring the bill. “Had (Gardena Police Officer)Michael Robbins been held accountable the first, second, or third time when he shot somebody, then Kenneth Ross Jr. might still be alive.”

Records from the shooting investigation show that as Officer Robbins got near the scene he saw other officers arriving and Ross, who matched the suspect’s description, running away. Robbins parked, grabbed his assault rifle and shouted for Ross to stop.

Video from his body-worn camera shows what happened next.

Standing behind the engine block of his squad car for cover, the barrel of Robbins’ rifle tracks Ross’ movement. Just after Ross crosses in front of Robbins’ position, maybe 100 feet away, the officer gives the trigger two quick taps. (“I gave him…a double tap that was just amazing, training just kicked in,” he told investigators later.) Ross falls to the ground dead.

It was the fourth time Robbins shot at someone in his nearly 30-year career, although his first shooting since the early 2000’s, he later said.

The Gardena Police Department, which is currently facing a lawsuit over the shooting, declined an interview request. Attorneys representing the officer also did not comment for this story.

As for Robbins, the pending decertification bill likely wouldn’t affect him. He retired from the Gardena Police Department in July 2020 with the rank of sergeant, records show. But if future officers are kicked out of the profession, it will be because of a bill named after the man he killed.

Next month, lawmakers will be taking up the Kenneth Ross Jr. Police Decertification Act of 2021.