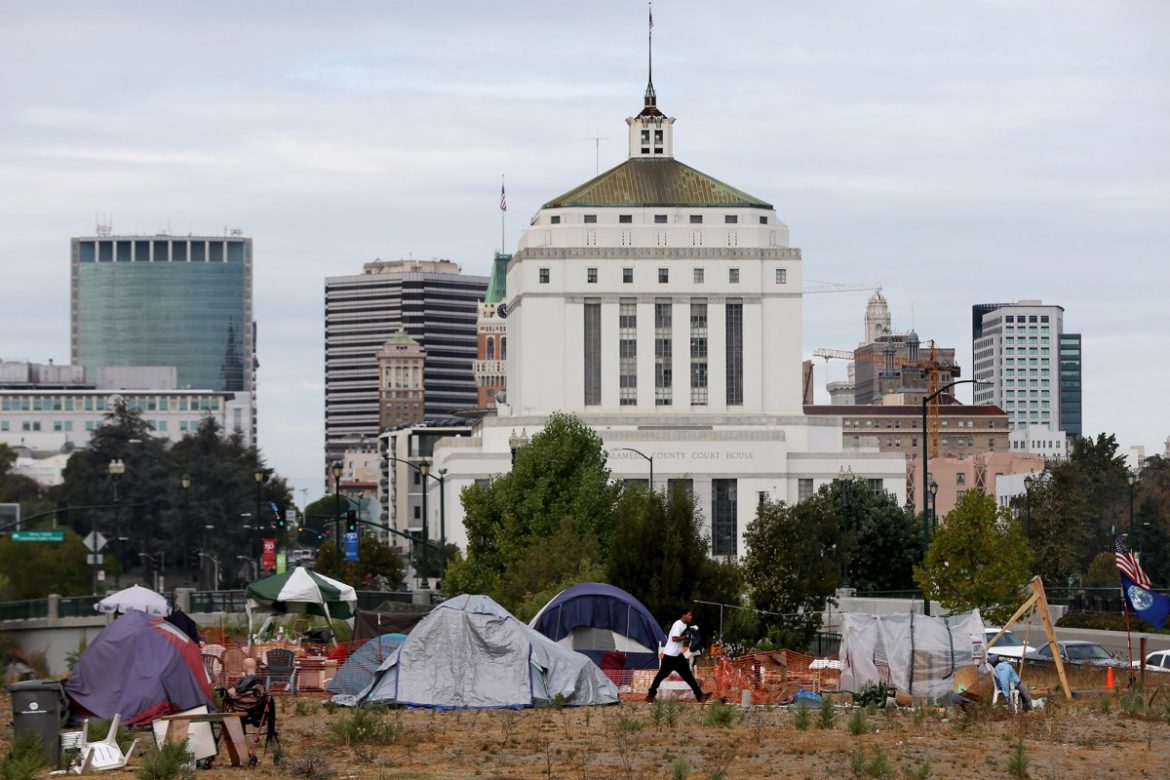 Today, thousands of California families could have been at risk of losing their homes had Gov. Gavin Newsom and the Legislature not cobbled together a last-minute extension of the state’s eviction moratorium.

But even with those protections in place, sheriff’s departments locked out at least 10,000 households amid the pandemic, with evictions increasing dramatically in the first three months of 2021, according to an analysis by CalMatters’ Manuela Tobias, Nigel Duara and John Osborn D’Agostino. Residents were evicted at higher rates in the Central Valley, Inland Empire and Los Angeles than they were in the Bay Area, where some counties had additional tenant protections.

The numbers — which offer the most comprehensive look yet at the pandemic’s effect on Californians’ housing stability — come amid an increasingly tense debate over the state’s homelessness crisis.

In an abrupt shift in policy, the Los Angeles City Council voted Tuesday to draft rules that would bar homeless people from camping near key public facilities. The federal government is pushing San Jose to clear a homeless camp with at least 600 residents near the city’s airport. Equipped with a bulldozer, Sausalito police on Tuesday dismantled a homeless encampment whose new location forced the city to cancel an arts festival. And faced with a surge in people sleeping on the street, Democratic Sacramento Mayor Darrell Steinberg announced a plan Wednesday that would compel homeless people to accept shelter when beds are made available to them — a proposal similar to that unveiled the day before by GOP gubernatorial recall candidate Kevin Faulconer.

But even as the pandemic pushed thousands of lower- and middle-income Californians to the brink, the state’s rich got richer — giving Newsom and lawmakers the resources to funnel $12 billion into homelessness over the next two years.

In a breathtaking and heart-wrenching project, “A Tale of Two Zip Codes,” CalMatters’ Jocelyn Wiener explores this very unequal toll on two Oakland communities — a poor area with the city’s highest COVID case rate and a more affluent area with the lowest — through the experiences of three high school seniors.

A Message from our Sponsor

California has administered 41,603,652 vaccine doses, and 59% of eligible Californians are fully vaccinated.

A Message from our Sponsor

Hours after President Joe Biden’s Wednesday meeting with Newsom and the governors of other Western states to pledge higher pay for federal firefighters — which could help California ease a significant staffing shortage — PG&E asked state regulators to approve an 18% rate hike to help cover wildfire prevention costs. If OK’d in full, the average California residential bill would increase by $36 per month for gas and electric service, according to the Sacramento Bee.

As policymakers grapple over who should bear the brunt of paying for wildfire damage, the damage keeps growing. Containment dropped Wednesday on the fast-growing Lava Fire, even as the number of firefighters jumped from 800 to nearly 930. The more than 8,000 Siskiyou County residents forced to evacuate were angered to learn that fire crews left the blaze on Friday, thinking it was extinguished, only to have it reignite an hour later and mushroom to more than 17,000 acres by Wednesday. Evacuation orders were also in place Wednesday for the Salt Fire in Shasta County and the Blue Fire in Fresno County.

2. Are counties ready for youth offenders?

Today, California’s state-run youth prisons will stop accepting newly convicted juvenile offenders as part of a plan to dismantle the system entirely by 2023. Responsibility for the state’s most serious young offenders now shifts to the 58 counties — but many still don’t have concrete plans in place, and some don’t have juvenile halls of their own. Further complicating matters, some cities are in the midst of reforming their own juvenile justice systems — San Francisco, for example, is set to shutter its juvenile hall this year and enroll most youth in rehabilitative community programs. But it hasn’t yet found a facility to house the most serious offenders — and now it will also be responsible for additional youth who would have otherwise entered state-run prisons.

The shift comes as state prison costs continue to rise, even as the number of inmates drops precipitously. In a scathing Wednesday column, the Mercury News and East Bay Times editorial boards attributed this discrepancy in part to the powerful prison guards union’s pay raises, which Newsom and lawmakers are poised to approve without conducting a legally required study to see if they were justified. The state last conducted the study in 2013, when it found members of the union received 40% more total compensation than their peers in local government.

Reported hate crimes in California reached their highest level in more than a decade in 2020, Attorney General Rob Bonta announced Wednesday. Bonta, whom Newsom appointed as the state’s top prosecutor in March amid a surge in anti-Asian harassment and violence, has pledged to crack down on hate crimes and rebuild trust between law enforcement and communities of color. The two reports Bonta released Wednesday show that anti-Asian hate crime events increased 107% from 2019 to 2020, while anti-white events shot up 110%, anti-Black events 88% and anti-Latino events 38%. You can take a closer look at the data here, though Bonta noted it likely underestimates the scope of hate crimes in California. To help get a more accurate count and ensure victims get justice, Bonta released brochures in 25 languages on how to identify and report hate crimes and published guidelines for how law enforcement and prosecutors should handle hate crime activity. One recommendation is to identify alternative forms of sentencing for hate crime prosecutions, such as restorative justice.