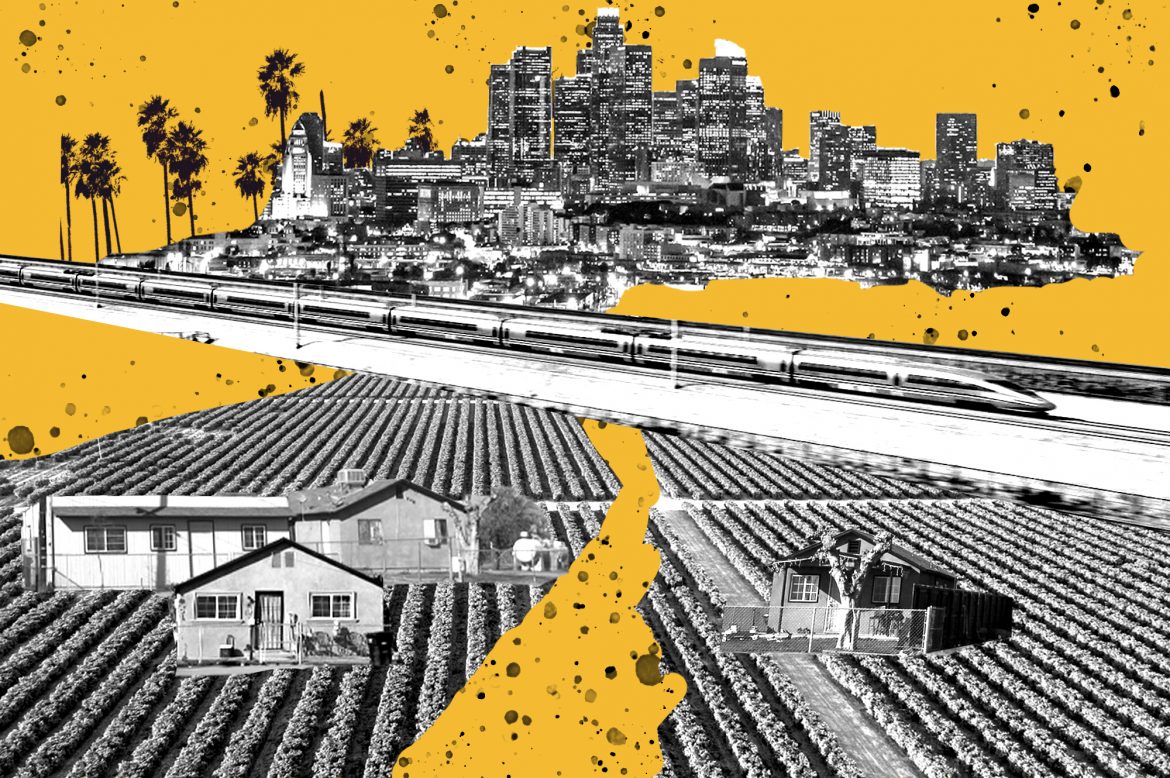 Thirteen years since California voters approved $10 billion to build a bullet train, Democrats who run the state government are divided over spending the money to finish building the first section of track — a 119-mile stretch in the Central Valley.

Though Gov. Gavin Newsom proposed pouring $4.2 billion into completing the segment, lawmakers balked and left the funds out of the June budget.

Now, the governor and fellow Democrats who control the Legislature are negotiating how much to chug along by laying track in the farm belt — or whether to spend more on transportation projects in more heavily populated regions.

“Typically what you’d see with projects like this is they’d start where the people are at and then radiate outwards. So, we would have started building high-speed rail in the San Francisco Bay Area, down in LA, and then eventually connect it,” said Ethan Elkind, director of the climate program at the UC Berkeley School of Law.

“We did this really backwards, and now we’re starting to really see the political price of that decision.”

The Newsom administration, however, praises high-speed rail as a job creator in the economically-struggling Central Valley. And then there’s the federal government: If California wavers on funding high-speed rail now, it could make it harder to compete for federal funds with other states. The last time Newsom publicly questioned the project, the Trump administration yanked $1 billion — funding that was only recently restored by President Biden.

“We are going to bat at the federal level for the funding necessary to build this first-in-the-nation high-speed rail system, and we urge the State Legislature to maintain its commitment at the state level,” U.S. Senators Dianne Feinstein and Alex Padilla wrote in a letter to legislative leaders this week.

But the Legislature isn’t so fast to green-light more money.

Key lawmakers, especially in the Assembly, say they don’t see the benefit for their Southern California constituents. And even if the bullet train eventually reaches Los Angeles and San Francisco, some legislators are skeptical that car-centric Californians will become train riders without more exposure to public transit in their daily lives.

“How (do) we turn California car culture into a California culture of transit of all sorts?” said Assembly Transportation Committee chairperson Laura Friedman, a Glendale Democrat. “That is the big question — and how does high-speed rail interact with that?”

Until then, she is reluctant to pump more money into a train through the sparsely populated Central Valley. With a quarter of California’s population living in Los Angeles County, Friedman would like to see money spent on improving Union Station in Los Angeles, the Metrolink commuter rail and transit between the San Fernando Valley and LA’s Westside.

She said she doesn’t see why California needs to immediately devote $4 billion more to high-speed rail when “they’re spending a billion and a half a year.”

The Newsom administration says high-speed rail construction is at a critical point. Money is needed now to complete the final piece of the Central Valley portion, according to Brian Annis, chief financial official at the California High-Speed Rail Authority. And, he said, the state is on the cusp of choosing a contractor to lay the bullet train’s track. That’ll cost money, too.

“The project has taken longer than originally thought. The scope has increased, which has added some costs,” Annis said. “But again, we’re hitting some major milestones here where we’re almost fully completed with our design.”

Without this funding, the Newsom administration argues, fewer workers will be needed and layoffs could start as soon as next summer.

More than 75% of those workers hail from the Central Valley — about 1,100 head to construction sites daily for jobs that come with health care and hard-to-find stability.  For one Central Valley carpenter, working near home for more than three months at a time had been uncommon.

“He’s home all the time now because this job has some length to it,” said Chuck Riojas, the executive director of the Building Trades Council for several Central Valley counties.

But the Newsom administration is having a hard time convincing the Legislature that the investment now is worth it.

“I support the concept of a high-speed rail in California, but I think our current approach is not working,” Democratic Assemblymember Luz Rivas, who represents the San Fernando Valley, said at a hearing in June. “There are other approaches that have been presented that could increase rail ridership, and I hope that those will be part of the discussion.”

A poll funded by the Assembly Democrats found that Californians are evenly split between killing high-speed rail or continuing it, but that support for the project is far higher among Democrats, the San Francisco Chronicle reported.

Friedman argues that better local service will boost support for trains, eventually restoring voters’ favor for high-speed rail. “We need to create a state of train riders in order to have the political will to finish this project,” she said.

Newsom also wants to fund local transit — his May revision proposed $1 billion toward improving regional and local rail services. The debate is over how much.

“It’s not really an issue of high-speed rail or local transit. What the governor is proposing is to advance both,” said Annis at the rail authority.

Some urban Democrats have been vocal about accepting the governor’s proposal as is. Sen. Scott Wiener from San Francisco tweeted in June that he supports Newsom’s funding plan because “high speed rail is a critical part of California’s transportation & climate future.”

Most Senate Democrats support moving ahead with funding high-speed rail, Senate leader Toni Atkins said. But she, too, wants to see more money for local transit projects in her region.

The San Diego Democrat said she’ll advocate for funding to move train tracks along the coast in Del Mar, where bluffs are eroding as much as six inches a year.

“We’re within 21 inches of the bluffs, so we are underway to move that line. That is the second busiest line in the country,” Atkins said.

With legislators having left Sacramento for a month-long summer break, decisions on rail and transportation funding likely won’t be settled until after they return in mid-August. Then negotiations kick into high gear before the legislative session ends on Sept. 10.

Elkind, the UC Berkeley climate lawyer, sees politics at play in the stand-off over high-speed rail:

“Given that it doesn’t seem like there’s much hope of the project coming anywhere close to the major population centers anytime soon, you’re seeing these legislators trying to essentially get leverage to salvage… money for their districts.”