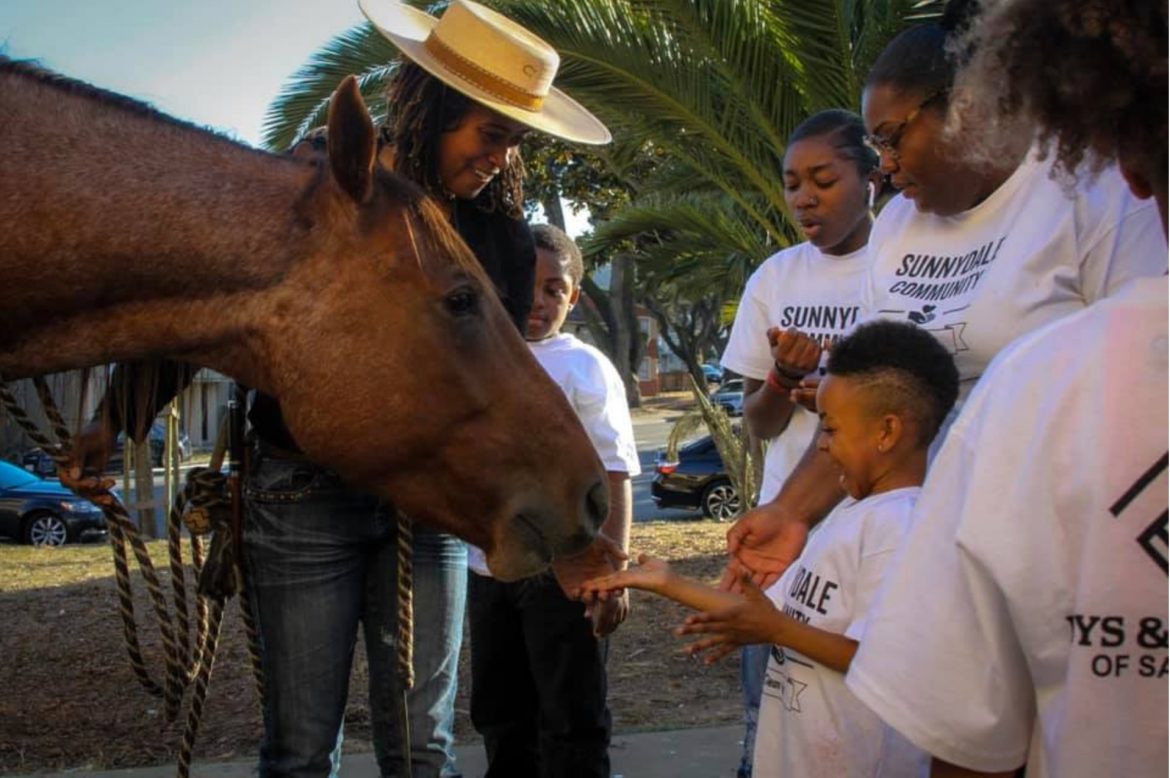 Since going viral for an image of her riding through downtown Oakland during a Black Lives Matter march last year, Mulatto Meadows founder Brianna Noble launched Humble — an after-school equestrian program for youth in underserved communities. (Photo courtesy of Humble at Mulatto Meadows)

“Is that a horse over there?”

The students of North Oakland Community Charter School (NOCCS) got a surprise on a hot Friday in July. After lunch, they would have the opportunity to meet, pet and learn about two horses, asking questions like what they like to eat and if they kick people in the head.

So while students drank from their milk cartons and lined up to play with a bouncy ball with staff in the park behind the school, Rachael Meyers, the NOCCS director of cultural and outdoor programs, helped Mulatto Meadows founder Brianna Noble park her truck and trailer, big enough to fit four horses, out front. But if you’ve parked a trailer as many times as Noble has, it’s light work.

“Putting my parallel parking skills to the test,” she laughed as she steps out of her truck in an outfit fit for a movie set, or a homestead; donning a white Mulatto Meadows embroidered shirt, thick jeans with an eye-catching belt buckle, a hat fitted over her locks and her spurs on.

Once secured, Noble and her two volunteers, Davonte and Lara, help usher out the equine guests — two handsome stallions hungry for carrots. One of them, Stud Muffin (or Mr. Muffin for the kids), felt comfortable enough to drop a little manure on the curb. Apparently, “he’s kind of a turkey.”

The bigger of the two, an Appaloosa named Dapper Dan, might look familiar. Last year, his image was everywhere from The Guardian to Vogue magazine as he trotted through downtown Oakland, with Noble sitting astride him, during a Black Lives Matter march protesting George Floyd’s murder.

The moment struck a chord across America and the world, not only for the picture’s charging spirit, but how it revealed a long-held falsity about the type of person who rides — or could ride, rather — a horse. The imagery was nothing short of empowering.

In the year since the viral moment, Noble moved her business Mulatto Meadows to a ranch in Castro Valley with a renewed goal to make her horses, and the tranquility that surrounds them, more accessible to communities — traditionally underserved groups largely made up of people of color — that wouldn’t normally have the chance to canter around a ranch.

“There’s an entire world and culture around horses that children, (and) families like them, never get to experience. I want these kids to see somebody that looks like them working with horses. And not just horses, but the (entire) agriculture space,” Noble said. “To me, this is much larger than horses. My tagline is, ‘Using horses as a medium to inspire positivity,’ and that means so many different things”; one of which being a bridled meet and greet, part of Noble’s new equestrian youth program, Humble at Mulatto Meadows.

The NOCCS gathering is the program’s first event since Mulatto Meadows moved from Martinez to its Castro Valley location, and everyone, including the adults, is excited.

Meyers met Noble back in 2019, before she was recognizable enough for people to wave at her from their cars, or approach her like indefatigable fan girls at the gas station. As someone who identifies as mixed-race, Meyers said she faced challenges growing up when figuring out who she was and how she fit into a predominantly white community in New England. The equestrian world is expensive, to put it lightly, but one of the ways Meyers was able to ride and, by extension, find herself was through camps.

“Being a young girl, and being in a predominantly white space at camp, I found a lot of healing from the horses. I had a lot of stuff going on in my own life, just going through the pain of growing up and trying to work through my identity, struggles in my background,” she said. “It’s something that you never forget, (being) face-to-face with the horse.”

Meyers started at NOCCS the same year she met Noble, and the idea of having the horses visit the school had been brewing for a while before the pandemic made proximity to horses, let alone other people, nearly impossible. But she believed in the idea, and evidently so did Noble, whose own daughter is quickly approaching school age.

According to Noble, horses are endowed with natural healing qualities, which kids, especially those growing up in a concrete landscape devoid of trees and natural scenery, don’t always realize they lack.

“I heard more than one of these children go, ‘Oh my gosh, it’s so relaxing.’

“These kids, you know, there’s a whole world outside of the concrete that they grow up with out there that they really haven’t had the opportunity to experience,” Noble said. “That’s what these little pop-up events are for us, an opportunity for them to see something different. To think about something new.”

For many of the students present, who represent a diversity of backgrounds and lived experiences, it’s their first time ever touching a horse, let alone seeing one up close.Approaching the horses in small groups, students are instructed to keep their palms flat so Mr. Muffin doesn’t mistake their fingers for food. (Video courtesy of Humble at Mulatto Meadows)

Rosie Miorana, a rising fifth grader, is pretty sure petting Dapper Dan was her first time petting and feeding a horse, but maybe she was too young to remember. Either way, she’s a fan.

“I wouldn’t want lessons,” she said, “but I would ride it. Horses are really pretty animals.”

Her classmate Aaliyah Melendez agrees. She has pet a horse before, in Hawaii, but was shocked that the bristles around a horse’s mouth “felt just like a mustache!” She was impressed by how big Dapper Dan is (over 17 hands tall) and that his tail had been braided just like her hair — “So cool.”

Besides establishing a new home base, Noble is currently fundraising to turn Humble into a full-fledged nonprofit, having covered the cost of lessons and urban field trips, like the NOCCS visit, out of her own pocket for the last six or so years. She’s received private offers, but Noble wants to see her vision through, without others’ interests to worry about.

“I want to do 100-percent nonprofit work. That’s my goal. That’s my mission. Just do this work all day long. But we have to have the funds to do it,” she said. “If I can’t meet those donations, it’s not that this program will go away; but it will be a lot smaller than I want, which then starts to limit how much I can do with the kids.”

Humble offers a myriad of programs aimed at, per the site, “leveling an unequal playing field,” via horsemanship programs, riding lessons for all ages, fitness classes and on-site visits. Information on volunteering, donations, wish list items and sponsorships are available on the Mulatto Meadows website.

Ultimately, the long-term goal is for Humble to be virtually self-sufficient, and in service to underserved communities across the Bay Area.

And despite her virality, Noble still feels relatively normal.

“I’m not one of those people that really was like, ‘Oh, let’s do it for the attention.’ I just tried to push it towards positive things,” she said. “All we can do is try to do the little bit that we can. I can’t imagine doing anything different.”