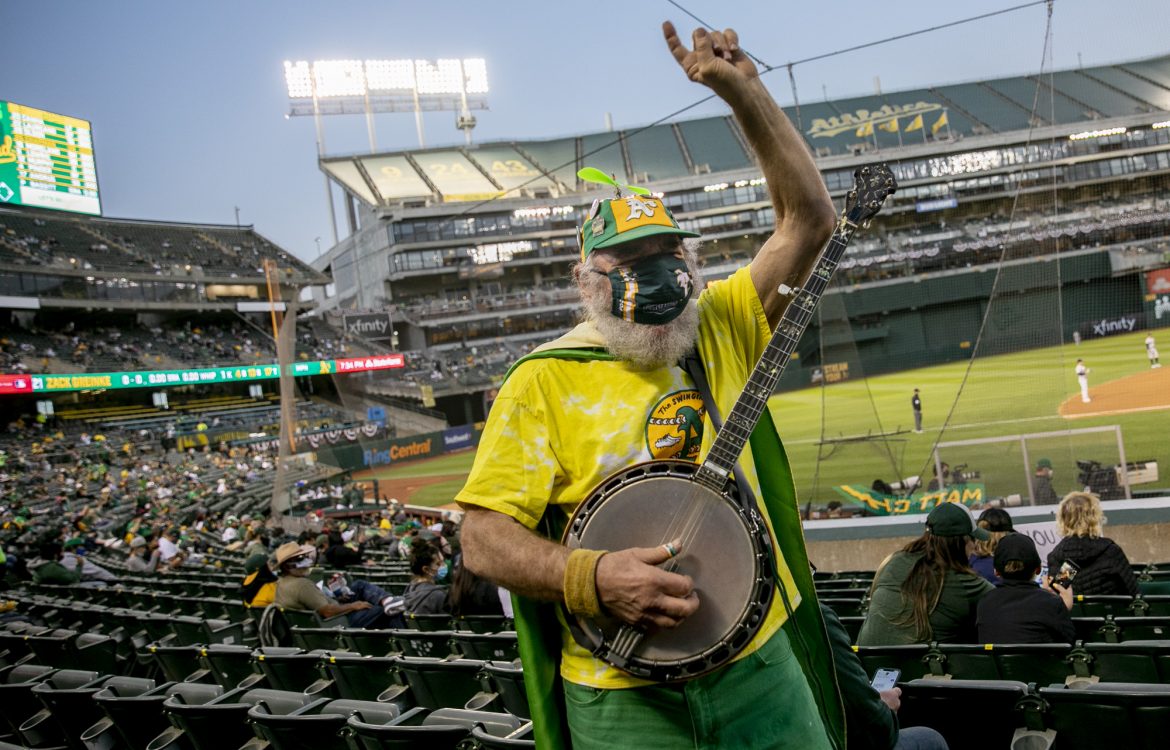 San Francisco resident Stacy Samuels, also known as Super A or Banjo Man, plays the banjo while cheering in the stands. Samuels, who has been bringing his banjo to Athletics games for more than 30 years, said “It’s great. It feels like a regular game,” of the season opener. Photo by Anne Wernikoff, CalMatters

The Oakland City Council’s financial plan for a new waterfront baseball stadium for the hometown A’s will go before Major League Baseball immediately while the team considers other cities for a venue, A’s President Dave Kaval said in an interview Tuesday.

“We need to have options,” Kaval said.

He said the A’s are running out of time for a new place to play and the only place in Oakland suitable to the A’s is at Howard Terminal off Market Street.

Oakland city councilmembers voted Tuesday on a non-binding financial plan for such a stadium, but the team said it was a swing and a miss.

Kaval said while progress has been made in negotiations, the plan the City Council voted on Tuesday afternoon is something that doesn’t work for his team.

“The council voted to adopt a plan and amendments by the city for a stadium at Howard Terminal that “is not a business partnership that works for us,” Kaval said.

Councilmember Rebecca Kaplan said the City Council’s amendments addressed the A’s biggest concern, which was having to pay for offsite transportation infrastructure improvements. However, the A’s still could not agree with the city’s overall offer.

About 1,000 people watched the meeting virtually and about 100 commented publicly before the vote. Six councilmembers voted “aye” for the city’s proposal while Councilmember Noel Gallo voted “no” and Councilmember Carroll Fife abstained. Gallo said he wants the A’s to stay at the Oakland Coliseum in East Oakland, something Major League Baseball officials said is not viable for the A’s. Fife believes the A’s are saying they are not rooted in Oakland and if they don’t agree with the terms presented Tuesday then the vote by the council was moot.

Following the City Council meeting, Oakland Mayor Libby Schaaf said her city and A’s are very close to an agreement, but Kaval disagreed. He said in some ways it’s too early to say how close the two sides are.

The A’s had not seen some of the amendments Oakland city staff presented to the City Council Tuesday morning before the council’s vote, Kaval said.

The A’s will dig in and see what the new terms are, Kaval said. Six “yes” votes from the City Council on a waterfront stadium is a positive thing, he said.

After the meeting, Council President Nikki Fortunato Bas, who worked on the amendments with Kaplan, said, “It’s (now) the beginning of the eighth inning.”

At the end of the game, Oakland officials hope to have the A’s in the city for at least another 25 years in a 35,000-seat waterfront stadium. The project also includes 3,000 new residential units, a new hotel with about 400 rooms, 1.77 million square feet of commercial space and a performance venue seating about 3,500 people. The stadium is expected to cost about $1 billion to build and the entire complex about $12 billion.

Kaval said the A’s hoped to have the City Council vote on financial plan that his team could agree on before the council takes their summer recess.

Bas’ office said no council meetings are scheduled before the recess to take up the non-binding financial plan for the A’s new stadium.