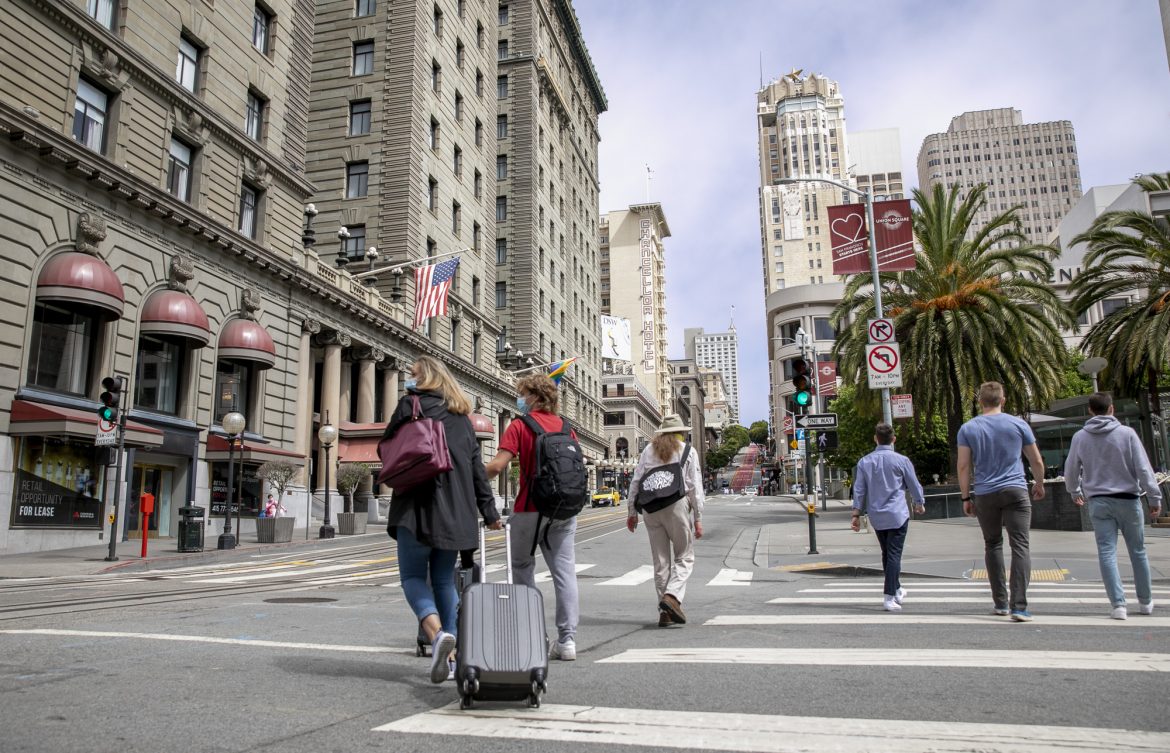 Pedestrians with suitcases walk through union square in San Francisco on June 14, 2021. The intersection of Geary and Powell Streets would have been busy with traffic, street cars and throngs of foot traffic before the pandemic. Photo by Anne Wernikoff, CalMatters

When Covid-19 shut down businesses and travel across the U.S., communities such as Anaheim that rely heavily on entertainment and tourism were some of the hardest hit. Hotel occupancy taxes, which accounts for more than half the city’s budget, plummeted 90% between 2019 and 2020.

“We depend on large groups at Disneyland, Angels games,” said Jay Burress, president and CEO of Visit Anaheim, the city’s nonprofit tourism office. “It was devastating for our industry and our city.”

With California reopening today to mostly full capacity, its travel and tourism industry is aching for a significant bounce back. But experts are tempering expectations; domestic travel won’t fully recover until 2023 and the number of international tourists, especially from China and Mexico, remain less than half of pre-pandemic levels. And a full reopening won’t happen until large conventions return — not a certainty with the wholesale move to work shift.

The state generated $144.9 billion in travel spending in 2019, according to a study by travel and tourism research group Dean Runyan Associates. But when the pandemic hit, travel and occupancy restrictions devastated gains that California had nurtured after the Great Recession.

While tourism dropped 36% nationally in 2020, California’s tourism revenue dropped 55%, according to Dean Runyan.

And more than half of California’s roughly 1.2 million-person tourism workforce lost their jobs in the first month of the lockdown, according to a report released in May 2020. The Legislature passed a law requiring businesses to prioritize rehiring those who lost jobs, and many workers are hoping to resume work.

Before the pandemic, the city of Anaheim had so many visitors, Burress said he feared they might get citations for over-congestion. Instead, the tourism director said this past year felt more like a “zombie apocalypse.”

“We had six years of record numbers coming into Anaheim and Orange County,” said Burress. “Normally hotels were running at 90% occupancy. And then it was in the single digits.”

The industry is already beginning to see some bounce back. This April, California’s leisure and hospitality sector was up 400,000 jobs year over year.

On the eve of reopening, Gov. Gavin Newsom made an appearance Monday in San Francisco at the historic Ferry Building, a draw for visitors with its artisanal food and restaurants. He noted California’s economy this year has outperformed other states, including Texas and Florida, because of its public health precautions and vaccination campaign. There’s hope that the upward trend will continue.

“With one of the nation’s highest vaccination rates and lowest case rates, California is poised for a powerful comeback,” said Beteta. “Leisure travelers will lead the way. We expect outdoor activities and road trips will be extremely popular.”

But experts acknowledge that returning to normal won’t happen instantaneously despite speculation of a second coming of the Roaring ‘20s. While many restrictions have been lifted in California, they aren’t the only inhibitors to people going on vacation.

“The drop in visitor spending isn’t due entirely to business closures and restrictions,” Beteta said. “Consumers must be willing to travel, and for much of 2020, more than half were not willing to venture out at all.”

Domestic travel to California is expected to rebound this year to 75% of its 2019 levels. But it’s not expected to recover entirely until 2023, according to the most recent Tourism Economics report prepared for Visit California released this April.

International travel remains another question mark as other countries continue to grapple with the virus and travel restrictions remain in place. Inbound international travel to California fell 79% in 2020 and is expected to reach just 41% of 2019 levels this year, according to Tourism Economics. Travellers from Asia and Mexico make up two of the biggest spending groups in the state, according to Visit California. Tourists from China alone spent $4 billion in California in 2019.

San Francisco is likely to feel the loss of international travellers the hardest. Foreign visitors account for 61% of total overnight spending city-wide, the largest share of any major U.S. city, according to data from the San Francisco Travel Association.

San Francisco is also the biggest convention city in the state and typically generates $8.3 billion annually on overnight spending at hotels alone. But experts expect conventions to be one of the last tourism industries to rebound this year, largely due to the fact that California is keeping restrictions on indoor gatherings of more than 5,000 people in place until Oct. 1.

The money generated from conventions is considered integral to the city.

“It’s vital to the city’s health. It’s vital to our hotel community, our restaurant community,” said Nicole Rogers, executive vice president and chief sales officer for the San Francisco Travel Association. “While tourism is important to us — and we absolutely can’t function without it, the convention is a higher spend on average because companies are paying, plus the attendees are paying.”

Conferences held at San Francisco’s Moscone Center can hold upwards of 10,000 attendees at a time. But the economic impact has a ripple effect. For example, during the annual Dreamforce conference put on by San Francisco tech giant Salesforce, more than 30,000 hotel rooms a night are booked. The city typically holds 50 to 60 major conventions a year. So far, just two have been confirmed this fall.

The future of convention spending in San Francisco relies on many things, such as retaining customers. Some opted this year to hold their conventions in less restricted states including Texas and Florida. Other factors relate to how businesses will opt to run going forward and if they’ll continue to hold in-person conferences at all, especially as employees become accustomed to remote work.