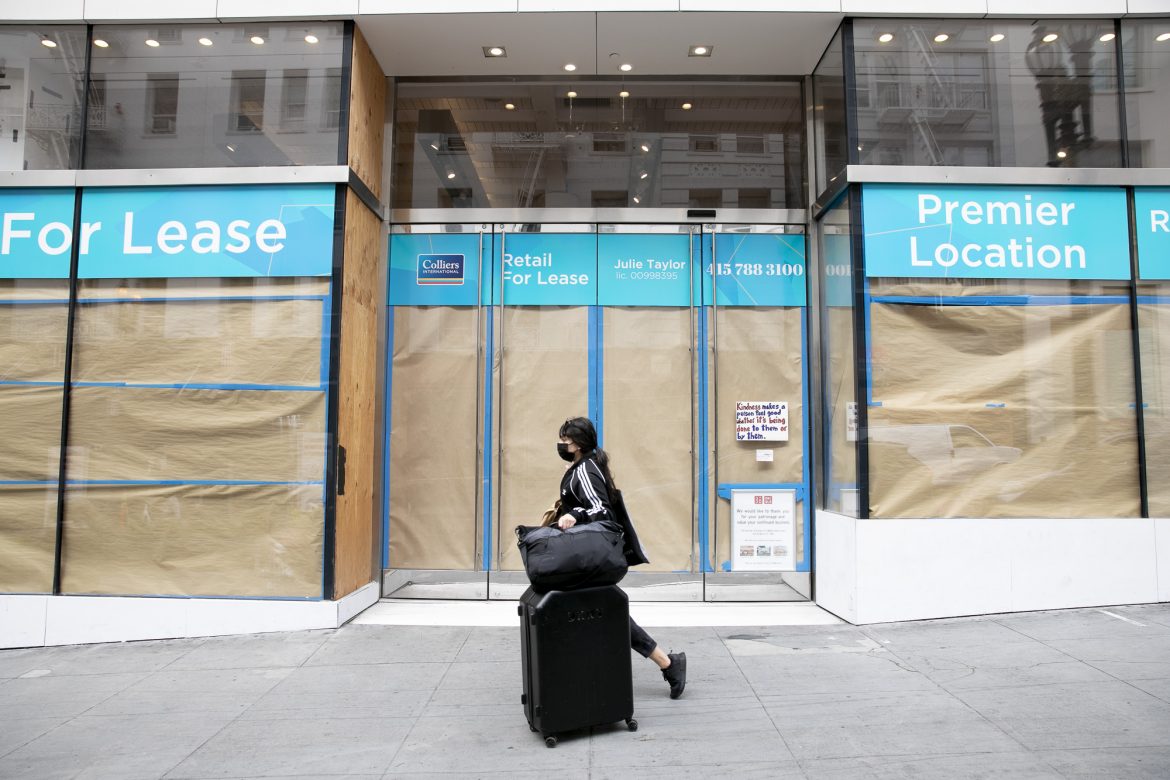 A pedestrian with a suitcase walks past a vacant store front on Powell Street in the Union Square shopping district in San Francisco on June 14, 2021. Photo by Anne Wernikoff, CalMatters

How you interpret California’s latest unemployment numbers may have a lot to do with whether you’re a glass half-full or glass half-empty kind of person.

If you’re the former, Friday’s report from the Employment Development Department is cause to celebrate: It shows that California’s unemployment rate dropped to 7.9% in May, down from April’s revised rate of 8%. The Golden State also gained a whopping 104,500 jobs in May, marking the fourth consecutive month employers added more than 100,000 positions to their payrolls. Never has California seen so much job growth coming out of a recession, according to Michael Bernick, a former EDD director and attorney at Duane Morris.

But if you’re the latter, the report is cause for concern: Despite record job growth, California’s labor force only grew by 12,400 workers — meaning thousands of open jobs are going unfilled. The Golden State has only regained 51.8% of jobs lost since the onset of the pandemic, far below the national rate of 66%. And the small business economy is “decimated,” with openings down 40.8%, according to Bernick.

Although middle- and high-wage workers have largely recovered employment, low-wage workers have not. Some experts say the jobs opening up in restaurants and retail aren’t paying workers enough to live in a state where the median home price tops $813,000. Other business owners say expanded unemployment benefits are incentivizing workers to stay home. EDD last week reinstated its work search requirement: Starting July 11, Californians will need to begin looking for work in order to keep receiving unemployment benefits.

As workers ask for higher wages, businesses are pleading for financial relief of their own. California is expected to borrow $26.7 billion from the federal government to pay unemployment benefits — a debt that will be paid by businesses via payroll taxes. In ongoing budget negotiations, Gov. Gavin Newsom has proposed covering $1.1 billion of that cost; lawmakers, $2 billion.