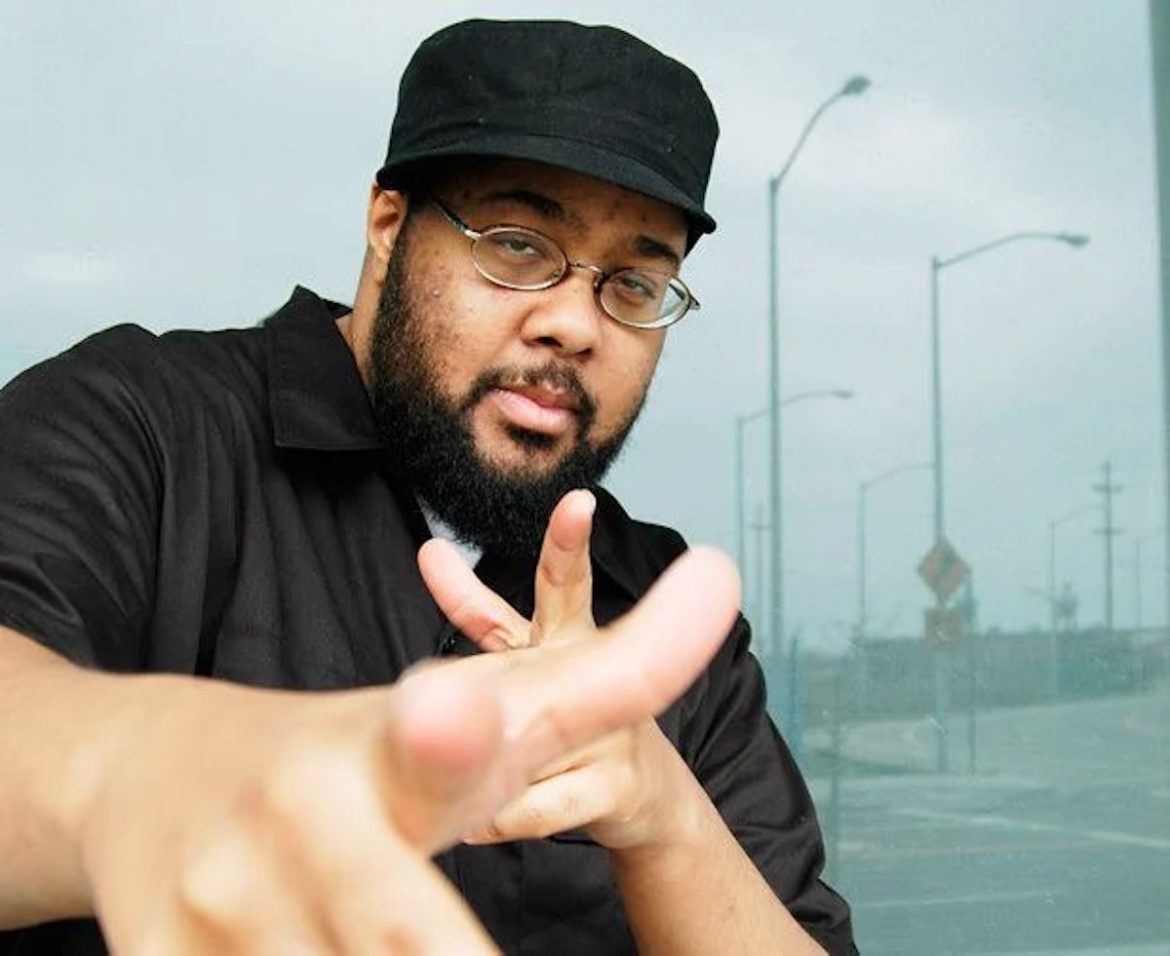 We don’t really “talk” in the Bay Area. I mean we do, but if you’ve spent enough time here, or were lucky enough to be born into this sonant landscape, “talk” doesn’t quite cover it. We spit, we mack, we slur and we gab — yadadamean?

By now, multiple generations have been born into and grown up fluent in this regional dialect, honed and perfected by the hip-hop scene manifested from the corner, from neighborhoods tucked away from the tech money and glitz of gentrification. These songs may not always sit on charts, and while many have transcended their regional soil (thanks, Too $hort and E-40), they’re not really meant for ears north of Sacramento or south of San Jose. They manifest on the yard at school, at those middle-school dances, at kickbacks, and in the backseat of sideshow cars.

The men and women behind those hyphy beats, bending language into these joyous, raucous shapes, often still walk among us, live among us and write among us. So when one of these cultural stenographers passes, we feel it personally; we know what vocabulary will never be heard again. To borrow a phrase from local hip-hop historian Dave “Davey D” Cook, “damn damn damn!!!”

It was announced last week that on June 18, beloved and bespectacled battle rapper-turned-underground lyricist Gift of Gab, a.k.a. Timothy Jerome Parker, died from natural causes at the age of 50.

Parker was the immutable tongue behind Blackalicious, a duo with DJ and producer Xavier “Chief Xcel” Mosley that produced four full-length albums between 1999 and 2015 since their founding in Davis, California, in 1994.

Parker would also put out three solo albums as Gift of Gab in his lifetime, with many singles, mixtapes and an abundance of features sprinkled throughout. Blackalicious were founding members of the Bay Area-based hip-hop collective and label SoleSides, now known as Quannum Projects, alongside local legends DJ Shadow, Lyrics Born and Lateef the Truthspeaker, all of whom have expressed their devastation on social media.

Chief Xcel’s is perhaps the most definitive, and anguished, painting a picture of Parker’s journey from his first rap persona as Tiny T in high school to his moving to Davis to meet the fellow artists who would form SoleSides to his touring internationally with Blackalicious. Even as Parker was diagnosed with kidney failure back in 2012 and put on weekly dialysis, Gab’s devotion to his craft and the compassion with which he approached everything remained — and was reinvigorated, even.

“He learned to tap into what he called the essence,” says Xcel’s statement on the Blackalicious Facebook page. “A creative reservoir, a spiritual force that he drew from. He believed that music was from us it was channeled through us. He believed that when we step out of the way we can express art at its highest form. He was a traveler, an explorer, and a scientist all rolled into one being.”

Parker was born in Sacramento on October 7, 1970, and embodied the tenacity and commercial aversion of a Bay rapper to the end. In a 2012 video interview in Oakland with TheBeeShine.com, he says The Sugarhill Gang’s “Rapper’s Delight” was the record that set him on the hip-hop path.

“Whenever I hear a record that’s great … that’s what I’m in it for,” he says in the video. “That rush of when you’re hearing that music or seeing that graffiti piece or seeing that B-boy and they do something that moves you, that’s just like, ‘Wow.’ I think that’s a big part of what the culture of hip-hop is about.”

He and Xcel connected through a mutual friend, but plans to complete musical projects kept falling through. He would eventually join Xcel in Davis in the early 1990s, and in 1994, Blackalicious released its first single, “Swan Lake.” Its first EP, “Melodica,” would follow in 1995, and from there, Parker hit the ground, or the pen rather, running. The rest of the 1990s would see some of his most acclaimed music, including the alliterative single “Alphabet Aerobics,” the “A2G” EP and Blackalicious’ 1999 full-length debut album, “Nia.”

He was, by all accounts, prolific, even if every word and refrain didn’t make it to the page or the recording studio. His first teachers, before he became the writer we know him as, were battle rappers, and those who could wield their words spontaneously without a notepad or phone app. In an interview with G4tv.com’s “Freestyle 101,” directed by Frank Meyer, he conveys his love for freestyling as a medium for transcending reality.

“Freestyle is like a lucid reality … you could be here one second, and the next second you could be on the other side of the universe. … Each moment is new.”

Lyrics Born, a.k.a. Tsutomu “Tom” Shimura, another Quannum member who wrote a tribute to Parker on June 25, calls him the best rapper he has ever known, and perhaps the most well-read to ever pick up a mic. His commitment to music was “monk-like,” Shimura wrote, as was his lifestyle off the stage. A Google image search shows Parker likely had a thing for polo shirts and newsboy caps, as he wasn’t photographed in much else, and went without the statement jewelry his contemporaries are fond of.

“He didn’t care abt accumulating the material trappings of life, he only cared about understanding the ultimate MEANING of life,” Lyrics Born said in an Instagram and Facebook statement. “Personal & spiritual growth is what drove him, & he kept himself on a perpetual path of discovery. He documented that journey in all those Blackalicious & solo albums we love & connect with so deeply.”

The first half of the 2000s were also productive for Parker, with a smattering of singles, another two Blackalicious albums and a couple mixtapes, but relatively speaking, very little after 2005’s “The Craft.” In a 2016 video with Pitchfork, he describes his diagnosis of kidney failure in 2012, an “overwhelming” realization that put fear of death in him, but also gave him more to say. He began receiving dialysis “three days a week, for five hours,” and rather than live off disability and putter around, he started writing again. He says in the video that he wrote 70% of “Imani,” the 2015 album that would be Blackalicious’ first in 10 years, while in dialysis.

And he went back on tour well before he received a kidney transplant in early 2020, making it to the stage even if a single performance winded him. What was he supposed to do, stop rapping?

Blackalicious shows, the peanut gallery of social media will tell you, were epic. Lateef the Truthspeaker took to Twitter to remind fans that “One thing about @blackalicious_ shows…We had hard nights- health issues, time issues, logistical issues, travel issues- whatever/But we didn’t have bad nights/Once we touched the stage…it was always a good show.” A retweet indicates this statement is “100% on GEE.OH.DEE facts.”

While many may not know his face, innumerable fans around the world knew his flow, the dexterity with which he wielded words and the depths they were able to reach. A search of #GiftofGab on Instagram yields nearly 30,000 results, a mix of old and new posts heralding his genius to mourning his passing from as far away as Miami and Brazil. But the tears will always flow fastest in the Bay, and the cries will echo through the lyrical architecture he’s left us.

Parker was 50, an age with plenty of experience but one we can hardly call old. He was close in age to another figure beloved by the Bay Area, Digital Underground’s Gregory Edward Jacobs a.k.a. Shock G a.k.a. Humpty Hump, who died at age 57 in April. Time and its curve balls haven’t ceased, even after a year that felt as though it played out on a hamster wheel, and we truly do not know how much time we have on this Earth.

In the TheBeeShine.com interview, Parker admits he avoided the “conscious rap” label for a long time, wary of being put in a box or reducing his craft to one genre. But he relented that he’d come to embrace it, that having something meaningful to say was a good thing. And he said so many good things.

“After I’m done, there will be no more/Grab the microphone and begin to soar,” he spits off the dome in the G4tv.com interview.

Rest in power, Gift of Gab. It’s time to soar.