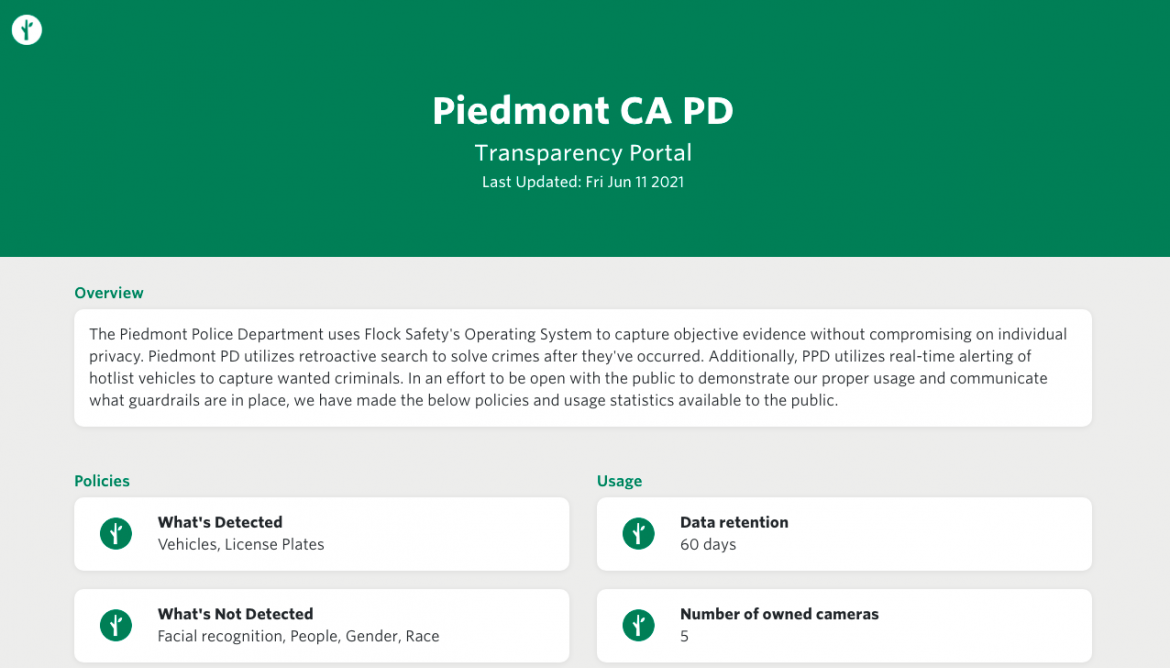 The Piedmont Police Department announced on Thursday that it was creating a new online portal in partnership with private company Flock Safety to give the public a window into how the department uses Automated License Plate Recognition (ALPR) technology and data. According to the company and police department, Piedmont police are the first in the country to launch this tool. Flock Safety is an Atlanta-based company founded in 2017 that specializes in license plate reading technology and has relationships with police departments across the country.

“This first-of-its-kind program demonstrates the Piedmont Police Department’s commitment to openness, accountability, and integrity.  ALPR technology has been a critical tool in our public safety efforts,” said Chief of Police Jeremy Bowers in a press release. “It’s important that our community has the ability to understand how we are using this technology in the furtherance of public safety.” You can read the department’s ALPR policy HERE.

Earlier this year, Piedmont police cited ALPR cameras in helping identify suspects in three of six robberies (who were then arrested) and aiding in 17 arrests and the recovery of 34 stolen vehicles in 2020.

The department says the portal can give the public access to anonymized audit logs of police usage of the technology. It also displays usage statistics, including the number of cameras the agency owns, other law enforcement agencies they share data with, and specific statistics on the number of vehicles captured, Hotlist alerts, and searches performed over the past 30 days.

Flock Safety has provided license plate reader technology to the Piedmont Police Department since 2020 and the department is planning to transition its entire ALPR system to Flock Safety, according to the press release.

In Piedmont and other jurisdictions, some residents and experts have criticized technologies that broadly gather video footage of communities, citing privacy concerns.

Flock Safety says it does not employ facial recognition, adheres to strict security standards and encryption standards, and does not share or sell customer data to third parties.

You can reach the new portal HERE.

Have questions about this new tool? Let us know and we’ll do a follow up story in the coming weeks.