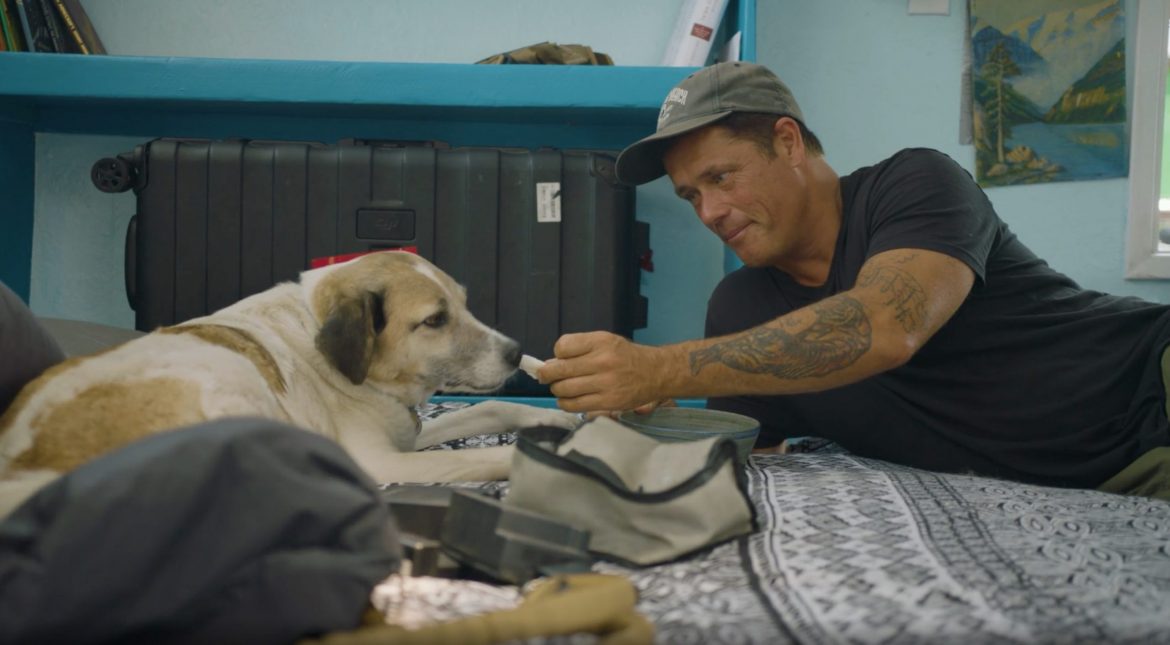 Doug Thron, an aerial cinematographer and environmental activist based in Oakland, rescued and adopted his dog Duke from the recent California wildfires. Thron is the center of the new streaming documentary series, "Doug to the Rescue." (Photo courtesy CuriosityStream)

Climate change is rapidly becoming (if it wasn’t already) the greatest threat to human life and the greatest force shaping how people see the future. Yet plenty of Americans — neighbors, business owners and even President Biden among them — can’t or won’t accept what it means.

While it is easy to recline on a sofa in a city center condo in the Global North and feel unaffected by climate change, millions and millions of people worldwide, and increasingly more within the United States, are experiencing climate disasters without the resources, infrastructure or preparedness to handle them.

Thanks to more than a decade in aerial cinematography, a lifetime of environmental activism and a very sophisticated drone, Oakland resident Doug Thron can see, in his own words, “the whole enchilada.” Thron travels from one climate disaster to another, locating and rescuing animals from imminent danger. His efforts have been documented by the new CuriosityStream series, “Doug to the Rescue,” which debuted Thursday.

“You get a really different magnitude for the fires and the magnitude of the hurricanes when it’s from a flying drone overhead,” he says. “This is an area the size of S.F. burned to the ground; we need to look at the way we treat the Earth.”

Thron has known the planet is in crisis for more than 30 years, since he moved to Arcata, California, from his native Texas to go to Humboldt State University and study photojournalism, hoping to work with the likes of National Geographic or Discovery.

His years spent studying and living in arboreal splendor inspired him to join the movement to protect the redwood forest, where he spent a decade protecting trees and was even addressed in a lawsuit from the Pacific Lumber Company. He went back to photo work and found himself with an affinity for aerial cinematography around 2005, and once they came onto the scene, drones — shooting for NatGeo, the World Wildlife Fund and the wealthy owners of San Francisco skyscrapers who sell luxury real estate.

Thron went viral in 2017 for a clip of Santa Rosa after the Tubbs Fire, but it was after the Camp Fire of 2018 nearly leveled the Sierra Nevada foothills town of Paradise that Thron realized if he wanted to be able to document the world’s flora and fauna for the rest of his life, he first had to ensure it would still be there. His decades-long efforts to protect trees, preserve natural habitats and rescue animals from the follies of man have coalesced in the new documentary TV program.

“Why didn’t you do this a decade ago, when I was younger and better looking?”, he asks with a laugh.

Come for the aerial exploration of a world both on fire and under water, and stay for koalas, cats, ponies and the call to arms that climate change is now. All six episodes of “Doug to the Rescue” are available to watch on CuriosityStream.

The show follows Thron across countries and continents between 2019 and early 2021 to the aftermaths of natural disaster sites, most if not all of which are exacerbated by climate change. Elements of old-school, on-the-ground environmentalism blend with advances in drone technology, as Thron uses customized infrared cameras on his drone to be able to locate animals hidden under debris or separated from their owners.

Across the Bahamas, Australia, Louisiana, Puerto Rico and right here in Northern California, hurricanes, drought and wildfires are displacing communities, ravaging land and all but razing these residents’ sense of safety. It’s also leaving innumerable animals in limbo. Showing the true scale of that, Thron believes, is the key to believing.

The show is full of shudder-inducing shots of chaos and loss: blackened hills, barren trees and entire neighborhoods drowned in garbage. These circumstances extend to animals too, who have no means of evacuation.

A rescue in the first episode takes place in 2020 during the LNU Lightning Complex Fire near Vacaville, where a couple of horses and a pony have been fending for themselves. Using his drone’s multiple camera settings, Thron is able to locate them by body heat sensor, and then get a clear video view to approach on foot. One equine beauty is so malnourished and pocked with growths and burns, Thron’s first reaction upon seeing him is “Oh s—!”

Susan Pagliano, a Vacaville resident, having stumbled upon the scene, provides additional lived experience, reminding viewers of the human toll as well.

“I just barely got out, about 2:30 in the morning … it caught my trailer on fire. I was in tears,” Pagliano says.

While the show largely follows Thron and his drone work, he frequently collaborates with other rescue organizations and community groups, because as he says, “I just fly the drone.”

Aja-Nikiya Estro and her group Compassion Kind first appear while Thron is in California, helping Thron rescue dogs; he later enlists them to assist with projects in Louisiana and Puerto Rico.

There are brief interactions with locals and residents who spare cat food and water for the critters, despite having lost their homes, livelihoods and sense of security. Organized collaboration is what gets, for example, a starved and singed cat out of a crawl space and into a loving home. In case any anxious viewers were wondering, the show does check in with a few lucky furbabies down the line, and they look pretty good.

Despite having to look devastation in the face every day (and fair warning, not every creature Thron and his team attempt to save has a happy ending), Thron feels good about the future.

Right now, he’s taking a little break and kicking it at his houseboat in an Alameda County harbor with his dogs Duke and Ghost, both of whom he rescued from fire sites. He’s looking forward to some more filming, and has feelers out as fire season picks up in California ahead of schedule this year.

He still makes time to respond to individual requests to search for lost pets, but he may not have the time after the show airs. Somewhere down the line, when drones don’t cost a year’s salary, he hopes to train the next generation of drone cinematographers, to document how we came back from the brink.

“It’s not too late. We are at the turning point,” he says. “Do we want rainforests, or do we not? Now is the time to protect that, to get involved in helping save the planet. Adopt an animal!”

* All episodes of “Doug to the Rescue” are available to stream at https://curiositystream.com/dougtotherescue/index.html. Consider donating to Thron’s GoFundMe to further his mission to save animals and document climate change at https://www.gofundme.com/f/7q27v-douglas-thron-drone-animal-rescue.