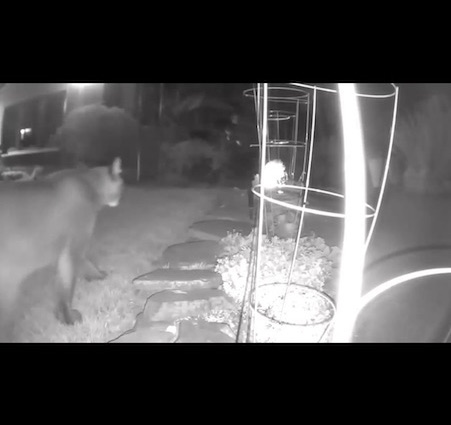 Related? An Oakmore resident below Hwy 13 shared a video on NextDoor of a mountain lion on their property a week ago.

“Stay calm,” he said. “Hold your ground or back away slowly. Face the lion and stand upright. Never approach a mountain lion, especially one that is feeding or with kittens. Most mountain lions will try to avoid a confrontation. Give them a way to escape.

“Do not run from a lion. Running may stimulate a mountain lion’s instinct to chase. Instead, stand and face the animal. Make eye contact. If you have small children with you, pick them up, if possible, so they don’t panic and run. Although it may be awkward, pick them up without bending over or turning away from the mountain lion.”

Captain Monahan said biologists say mountain lions don’t recognize standing humans as prey. Occasionally, a mountain lion may act aggressively. If it does, you need to do everything you can to appear intimidating.

“Attempt to appear larger by raising your arms and opening your jacket if you are wearing one,” Captain Monahan said. “Wave your arms slowly and speak firmly in a loud voice. If looking bigger doesn’t scare the mountain lion off, without crouching or turning your back, start throwing stones, branches, or whatever you can reach in its direction (toward it, but not directly at it). Aim for the ground in front of it; don’t throw things directly at it just yet. Think of these as warning shots. You aren’t wanting to hit and unnecessarily injure the mountain lion, but you do want to show it that you can defend yourself and potentially injure it. And that will hopefully deter it from approaching any closer.”

Picking up rocks can be difficult without crouching down. If you have things in your backpack, you can throw them as well. It’s a good idea to keep at least one item such as a metallic or hard plastic water bottle to use as a club if necessary, according to Capt. Monahan.