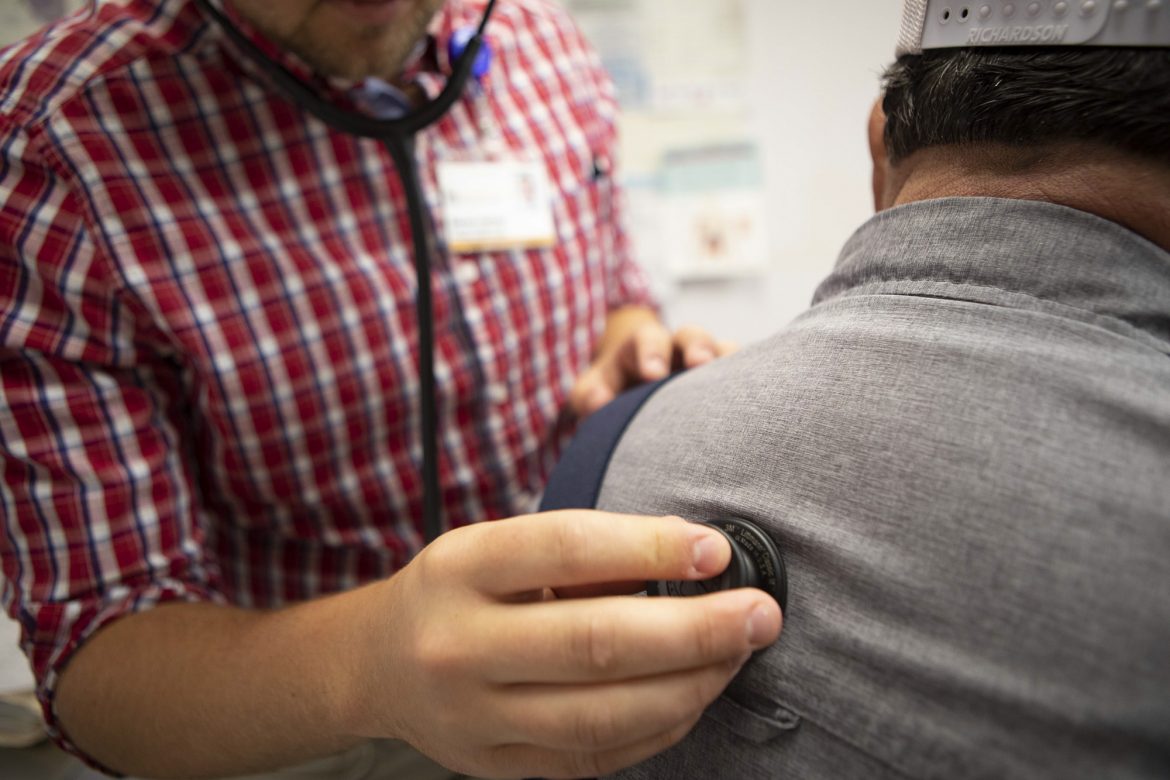 A physician's assistant listens to a patient's heartbeat at a clinic in Bieber, California on July 23, 2019. Photo by Anne Wernikoff for CalMatters

Kming Rosenthal recently inherited $5,000 after her birth mother passed away last year. Rosenthal, 72, who lives off her social security disability benefits and doesn’t have much in savings, welcomed the extra cash.

She planned to deposit most of the new money in her savings account, but soon learned that if she wanted to keep her free Medi-Cal coverage, she couldn’t have more than $2,000 in the bank because it would disqualify her from Medi-Cal under what’s known as the “asset test.”

Rosenthal, who lives in Orange County, panicked. She needs Medi-Cal, the state’s insurance for low-income Californians, to help cover her pricey HIV medication and other costs not fully covered by Medicare, which covers seniors.

She had to spend the money — she bought a new bed and a refrigerator — so that it wouldn’t affect her eligibility.

Now she wishes she’d waited. “I’ve recently run into some shortages and I think, ‘if only I could have kept more of that money,’” she said.

It’s too late to help Rosenthal, but the California Legislature is seeking to eliminate the Medi-Cal asset test once and for all.

In its budget approved earlier this month, the Legislature included an ongoing $105.7 million to cover the expected increase in Medi-Cal enrollment as a result of axing the asset limit. A final budget is still pending as negotiations with Gov. Gavin Newsom continue this week.

The governor’s May budget revision did not address the Medi-Cal asset test and he has not commented on it publicly.

The Legislature also is negotiating or awaiting final approval for other Medi-Cal changes, including:

“This is a complete 180, from potential cuts and rationing to program expansions,” said Linda Nguy, a policy advocate with Western Center on Law and Poverty.

Last year, as the state planned for a budget deficit induced by the coronavirus pandemic, advocates feared losing some of the Medi-Cal gains achieved in the past years as the state recovered from the Great Recession. Although most programs stayed as is last year, planned program expansions were put on hold.

Now, with a $76 billion surplus, Newsom and lawmakers are discussing offering more benefits to more people for longer periods of time.

As of March, 13.7 million people — about a third of the state’s population — were enrolled in Medi-Cal. That’s about 1.2 million more people than were enrolled a year earlier because people lost jobs and wages during the pandemic. Nationally 10 million Americans enrolled in Medicaid, the federal insurance program for the poor, during the pandemic, according to a federal report.

Claire Ramsey, an attorney with Justice in Aging, said given the need and the state’s strong economic standing, now is the time to expand Medi-Cal to people who have been left out and eliminate outdated barriers.

For years, advocates and some lawmakers have been proposing to expand Medi-Cal benefits to unauthorized immigrants. They’ve succeeded through a piecemeal approach, first opening the program to undocumented children and then young audlts up to age 26. Older adults would be the latest addition.

A separate bill by Assemblymember Joaquin Arambula, a Fresno Democrat, seeks to expand Medi-Cal to all income-eligible undocumented immigrants, regardless of age.

People without legal status are barred from federal health coverage programs under the Affordable Care Act — commonly known as Obamacare — so health expansions for this population must be paid by state-only funds.

One thing Obamacare did do is eliminate Medicaid’s asset test for most people. It only applies to seniors and people with disabilities, driving financial instability among these already vulnerable groups, Ramsey said.

But, as Kming Rosenthal found out the hard way, besides needing a low enough income to qualify for Medi-Cal, a person cannot have more than $2,000 in certain types of assets; the limit for a couple is $3,000. These thresholds have not changed since 1989, when the average movie ticket cost $4.

The thinking is that if people have over a certain amount in resources, then that money could go toward paying for health care. “That means people can’t save for uncovered health expenses…or a move; a month’s rent and deposit are more than that,” Ramsey said.

And the rules can get complicated, leaving some people confused about what counts against their eligibility. Checking and savings accounts, cash on hand, a second car and life insurance count in the asset test, but a home and one car are exempt. Ramsey said that means low-income renters whose only assets may be in cash are at a disadvantage.

Close to 18,000 people could become newly eligible for Medi-Cal if the state eliminates the asset test, according to a March 2020 report from the Department of Health Care Services, which oversees the Medi-Cal program.

Assemblymember Wendy Carrillo, a Democrat from Los Angeles, introduced a bill that also seeks to repeal the asset test in case it doesn’t get done through the budget. AB 470 builds on legislation from 2019 that sought to increase the limit of countable assets from $2,000 to $10,000 for an individual. That two-year bill was shelved during the pandemic.

Ramsey said health advocates are not concerned that eliminating the asset test would allow rich people to get on Medi-Cal. “That’s a unicorn problem; we’re talking about a person who would have to be very low income but somehow rich in assets. If you could afford to get care anywhere, I don’t think you’d pick a Medi-Cal bed,” Ramsey said.

Ahead of California, nine states plus Washington D.C. have increased their Medicaid asset limits, and Arizona got rid of it.

Many people on Medi-Cal may not even know about the asset rule until it comes time to renew their coverage.

“This state, of all states, needn’t look very far to see how many people are living in the streets,” Rosenthal said. “One misstep with my benefits and that could be me, and with my health conditions, that truly would be a death sentence.”