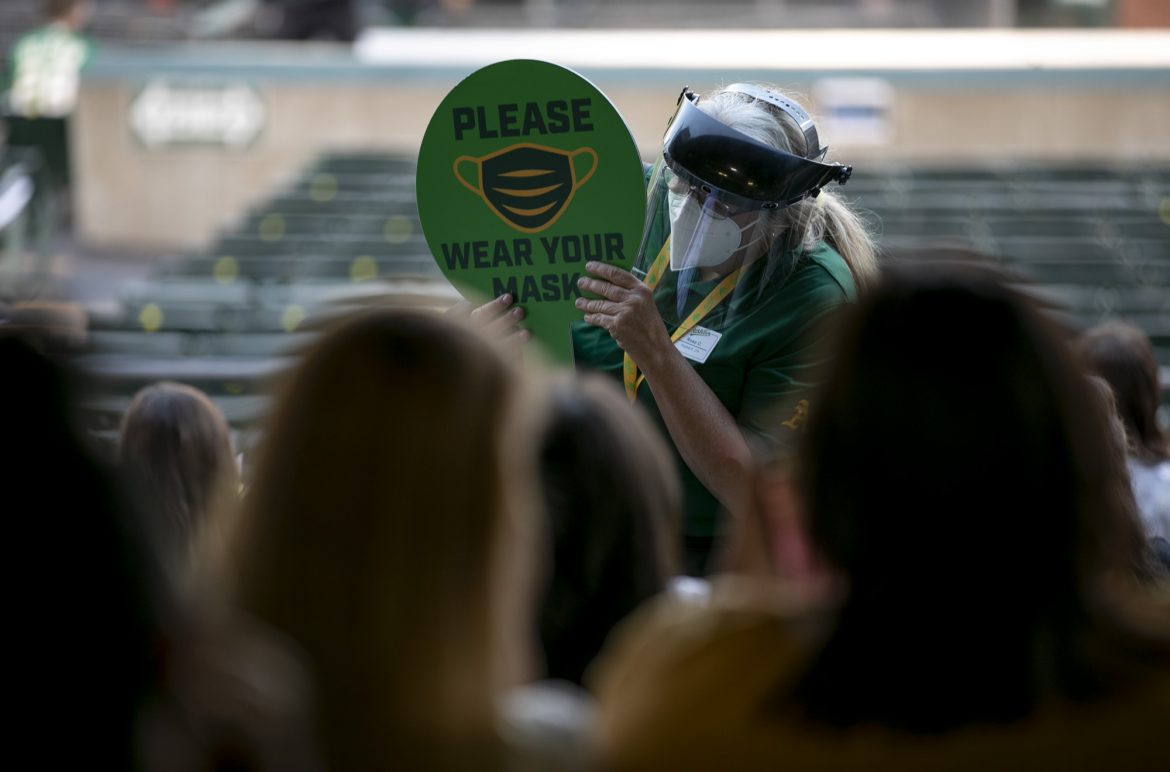 A Coliseum service employee carries a mask through the stands reminding fans to wear as mask. Coliseum implemented a number of safety protocols for the season opener including masking, distancing and touch free payments for concessions. Photo by Anne Wernikoff, CalMatters

California is set to fully reopen its economy and end its mask mandate on June 15 — but it appears many of us could still be wearing masks well past that date. That’s because the state’s workplace safety agency on Thursday night passed rules that require employees to wear masks unless everyone in the room is fully vaccinated — something almost impossible to ascertain for many businesses, as the state is not creating a vaccine passport system.

However, the Cal/OSHA standards board also emphasized it will consider further loosening restrictions. It initially voted to reject the rules it eventually adopted, but that would have kept even stricter emergency regulations in place. The about-face occurred after a heated debate that lasted more than nine hours and drew about 800 participants.

Business groups said the loosened rules — which still have to be reviewed by the state Office of Administrative Law — strained credulity.

Gov. Gavin Newsom, who could overturn the rules via executive order, declined to take a stance on the issue Thursday. But he extended through the end of the year two other temporary pandemic measures: the ability for restaurants to offer to-go alcoholic drinks and expanded outdoor dining.

Another thing that’s stayed the same: California’s vaccination rate, which has continued to fall despite Newsom’s $116.5 million vaccine incentive program. But the governor’s administration is optimistic it will start ticking up today, when the state unveils the first 15 winners of a $50,000 cash prize. The next 15 winners will be announced June 11, and 10 Californians will win $1.5 million each on June 15, the date of the state’s grand reopening. You can find more information about the program here.