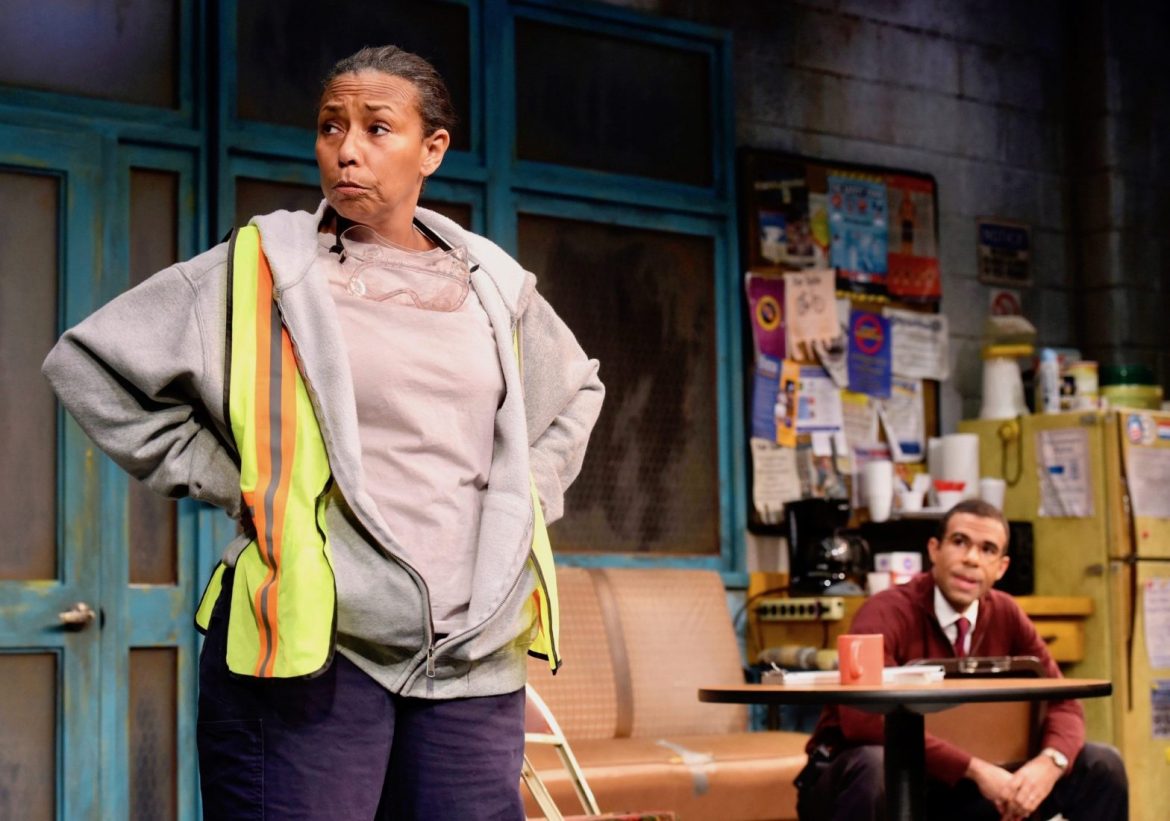 Physical and verbal assaults on Asian and Black people here and across the United States have triggered words of anti-racist solidarity in Bay Area theatrical circles.

These impassioned statements are rife, partially sparked by “The Living Document,” an open website crammed with anonymous testimonies from individuals who identify as Black, Indigenous or people of color (BIPOC) — people who’ve encountered “aggressions, overt racism, feeling unsafe, uncomfortable and discriminated against” in local theater companies and performance spaces.

The headline of the ever-evolving site (https://www.bipoclivdoc.com), which started last summer and has drawn hundreds and hundreds of entries, is provocative: “Chronicling the extent of White Supremacy in the Theater Industry.”

Reactions from theatrical officials and artisans have often been introspective, sometimes knee-jerk, almost always emotion-packed. Occasionally, concrete action has occurred in response to the document.

The Berkeley Rep (https://www.berkeleyrep.org/solidarity/index.asp), for example, after verbalizing outrage at hate crimes in general, has voiced specific support for AAPI colleagues after the Bay Area saw an uptick in anti-Asian violence over the last year. Its website links the problem to “long-standing anti-Asian racism.” A year ago, after the killings of George Floyd, Breonna Taylor and others by police, Berkeley Rep had asserted “that Black Lives Matter.”

The site urges visiting stopaapihate.org to report anti-AAPI hate crimes and compassioninoakland.org to support safety in the Oakland Chinatown community.

A statement from Gail Wagner, Berkeley Rep board president; Johanna Pfaelzer, artistic director; and Susie Medak, managing director — all white women — confesses that “it has been painful to acknowledge the extent to which we, as individuals, as institutions and as a theater community have been part of [the] racist system.”

That admission, they say, has led to internal conversations among Berkeley Repertory Theatre staff, board members and co-workers “about the ways in which we have perpetuated racist behavior” — and, acknowledging “that the experience that many BIPOC artists and audience members have of Berkeley Rep is not the same as that of white artists and audiences.”

As a small healing step, the company has hired “a BIPOC woman to fill a newly created role of human resources and diversity manager,” Modesta “Mo” Tamayo.

Meanwhile, the American Conservatory Theater, citing the recent attacks on the AAPI community, has affirmed that A.C.T. “stands against hate or any other form of violence.”

On its website (https://www.act-sf.org/about-us/mission-values-and-edi/), however, the San Francisco company acknowledges “our organization’s history as a predominantly white institution. We also acknowledge that A.C.T. has caused real harm and trauma, consciously or subconsciously, directly or indirectly, adversely impacting our colleagues, students, audiences, staff and members of our community.”

A section about equity, diversity and inclusion (EDI) includes a commitment “to becoming an inclusive and anti-racist organization where everyone can thrive.”

Furthermore, a joint statement to Local News Matters from Pam MacKinnon, artistic director, and Jennifer Bielstein, executive director — also white women — says A.C.T. will “strive to share stories about and told by a diversity of voices in order to open hearts and minds, to build empathy and lead to a stronger community.”

While some thespians concede that a few anti-discrimination fixes are occurring in the theater world, many maintain that progress is too slow and suggest remedies will take a long time.

Margo Hall, the Black artistic director of the nomadic Lorraine Hansberry Theatre (https://www.lhtsf.org/), contends that African American frustration around representation in theater has “been bottled up for 400 years [and will] take many, many more to balance out, based on the years of Euro-centric history and colonization.”

Theater companies, says Hall, who’s acted with most major Bay Area troupes, do not understand “what it takes to produce Black shows or shows about people of color.” She points to “plays dealing harshly with slavery or overt racism” that provide “no place for a Black person onstage to go for refuge … to be protected” when they’re immersed in that kind of scenario night after night.

For example, she elaborates, lots of troupes “don’t have the right colored stockings — they assume stockings for white people are right for everybody. It may seem like a minor thing, but it’s symptomatic of the larger problem.”

She says the evergreen “Living Document” “came at a very crucial time in our community, and I applaud those brave enough to talk about it. People felt they had no one to go to, to express their feelings.”

Jeffrey Lo, a Filipino American playwright who’s also the director of community partnerships for TheatreWorks Silicon Valley, says he’s someone who’s “dealt with prejudice my entire life” and “been told to go back to where I came from.”

He observes that it can be too easy for Asian Americans “to feel like perpetual foreigners and not Americans. Portrayals … have been as villains or aliens, and we need to promote three-dimensional people with full lives. We as artists should be the first step in combating hate crimes and racism because we can create empathy.”

He says he’s hopeful for “more representation of the Asian population and other communities” on theatrical boards of directors.

Lo’s comedic play, “Writing Fragments Home,” will livestream Saturday as a fundraiser for Compassion in Oakland (https://my.theatreworks.org/6121/6123), a joint effort of 40 Bay Area theaters and arts organizations. The reading will also be available on-demand Sunday-June 9.

While that’s happening, an internal examination will continue to take place at San Francisco’s Theatre Rhinoceros, which has launched a study to find any gaps in its determination to provide “an anti-racist, equitable and liberated organizational environment in which artists and staff can work and thrive.”

And the troupe, run by John Fisher, a white man who’s been streaming one-person shows during the pandemic, now expects “all parties doing business with our organization to contractually commit themselves to these principles.”

The website of The Rhino (http://therhino.org/bipoc/), “the longest-running queer theater in the world,” explains that the company was established 44 years ago “with the vision that queer people, as a population marginalized or ostracized by society, need space in which their artists can create and produce. Our history reveals an evolution in our consciousness to include BIPOC artists and audiences in our mission. This remains our commitment … [but] we still have far to go in creating a theater that is truly inclusive of everyone in the LGBTQ+ communities.”

The site concedes the company’s work is carried out “on land violently appropriated from the Ohlone people of the Bay Area and, when appropriate, will specify the Ramaytush, Chochenyo, Karkin, Yokuts and Muwekma tribes. The theater pledges to intentionally include artistic representation of Indigenous people in its programming.”

Fisher also informs Local News Matters that during COVID “all of the main-stage plays and most of the readings have been on BIPOC issues” and have used BIPOC directors, actors and stage managers.

Alicia M. Retes, who is proud of her Mayo and Yaqui heritage but asserts she “can only speak for myself and not all Indigenous people because there are so many tribes,” is blunt: “The United States is quite racist. … The whole country is based on the extermination of Indigenous people.”

She pointedly recalls a San Francisco casting director for commercials demanding she change her name “to Bach because Retes was too ‘foreign.’” In drama class, she laments, “I always got parts like maids or servants. The better parts always went to lighter-skinned people.”

The pandemic, elaborates the actor, storyteller, writer and educator who also has Mexican heritage, “revealed the dark underbelly [of the American culture], racism, exclusion, lack of equal opportunities.”

Retes, ex-education director of the pandemic-closed Museum of the American Indian in Novato, recently put on an Indigenous-based performance in El Cerrito as a part of “Neighborhood Stories” (https://neighborhood-stories.com/stories/). She also will be part of an online Silicon Valley Shakespeare show Aug. 13-29 called “Folktales From Around the World” (https://www.svshakespeare.org/).

Sujit Saraf, co-founder and artistic director of Naatak House, “America’s biggest Indian theater,” in Santa Clara (https://www.naatak.org/), says he hasn’t experienced any discrimination firsthand but has definitely “been involved in discussions where people of color have talked about being not given opportunities by the mainstream to give free rein to their expression.”

And he, like other brown-skinned people from India, is “greatly disturbed” by burgeoning anti-people-of-color incidents in the United States.

Nikko Kimzin, former director of education and community engagement at Sonoma County’s Transcendence Theatre Company (https://transcendence4all.squarespace.com), identifies as a “queer Latin-esque theater-maker” now working as an arts consultant. Six months ago, he resigned from the company and went public about an “ongoing suppression of equity, diversity and inclusion practices” as well as a “hostile work environment.”

“The focus needs to shift to ‘How do we care for those who have endured trauma from those white leaders who have inflicted trauma?,” he says. “As long as donors and ticket-holders accept the product without looking at the process, the systems of supremacy will remain.”

Brad Surosky, the white executive director of Transcendence, says the organization is working on an equity/inclusivity policy and board diversification. In a Feb. 21 Facebook post on its page, Transcendence owns up to “mistakes and missteps” and says its “goal is to provide a safe and inclusive environment for people of all backgrounds.”