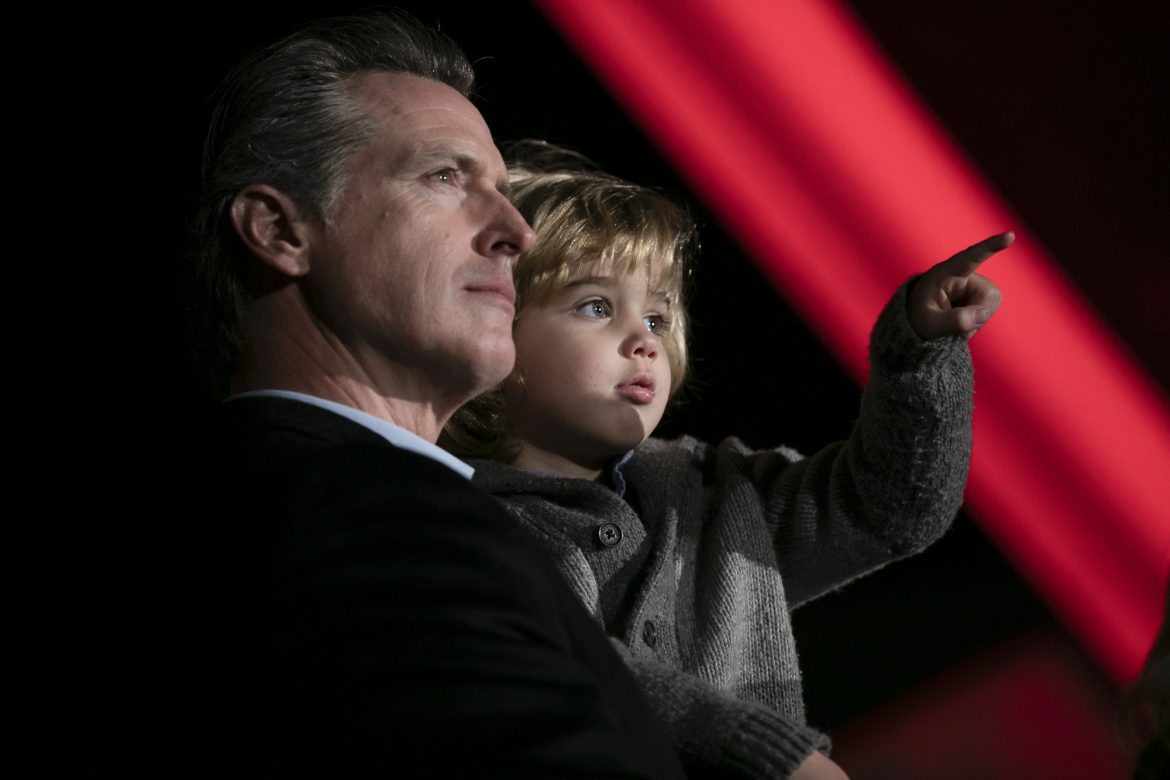 Gov. Gavin Newsom with his youngest son, Dutch, during the annual Christmas tree lighting at the Capitol on December 15, 2019. Photo by Anne Wernikoff for CalMatters

It was strange, after 15 months of watching Gov. Gavin Newsom’s press conferences on my computer screen, to see him up close.

He was sitting in a conference room in the California Lottery building, wearing his signature bear-emblazoned face mask and typing on his phone. He had just held a press conference announcing the first 15 winners of a $50,000 cash prize in the state’s vaccine lottery, but the event hadn’t gone as expected. Unimpressed with the glitzy Wheel of Fortune decor and confetti fireworks, reporters had pummelled him with tough questions, and recall supporters had pounced on Newsom’s assertion that he wouldn’t give up his emergency powers when the state reopened on June 15.

When I walked into the room, the first thing Newsom did was apologize for being on his phone. I sat down and pulled out my own phone to record our interview, commenting that the coffee brewing in the corner of the room smelled good. To my surprise, Newsom jumped up and poured me a cup.

Actually, I was surprised to be meeting Newsom in person at all. For nearly a month, I had been trying to land a conversation with him for a fun project: a series of talks with California’s living governors about their favorite books, TV shows, movies, music, food, etc. His press office and I had settled on a phone call or Zoom, but we hadn’t picked a date, and I was beginning to think the interview wouldn’t happen. Then, the night before Newsom’s lottery event, I got an email offering a 15-minute in-person interview with the governor.

Fifteen minutes: That would be more than enough for Newsom to run through what he was reading, what he was watching on Netflix. But our conversation ended up being longer than 30 minutes, and it also ended up being more serious than I had expected, with Newsom talking about his childhood and his parents and his own experience as a father.

He also talked about his life during the COVID-19 pandemic, providing a rare glimpse into the behind-the-scenes of one of the country’s most visible governors — whose visibility has only grown with the looming election to oust him from office.

The recall, of course, looms over everything — and could very well have something to do with me getting an in-person interview in the first place. I didn’t go into the conversation with the intention of grilling him about the recall — that wasn’t the goal of the piece — but it came up anyway, because the political inevitably bleeds into the personal.

Thirty minutes: That was enough time for a portrait of Newsom’s personal life amid the pandemic to emerge. Here are key excerpts from our conversation, edited for length and clarity.

Newsom: I do have four kids, so yes, but it’s not what I want to watch. The one show I cannot see another episode of is “Spirit.” My daughter loves horses, and every time I try to turn the channel it goes back to “Spirit” … We just finished the one Netflix series, we did finally get through all the seasons, my wife and I, and we did it late at night. It was not a great way to go to bed every night. We got through “Narcos,” which we’ve been obsessed with. Obsessed. We’re just like, at one in the morning, we’re like, “One more.” “No.” “One more.” “All right, let’s do one more.” And it’s 1:43 and we’re like, “I can’t believe we’re doing this.”

Me: I actually was so curious about your sleep schedule, especially at the beginning of the pandemic. How many hours a day would you sleep and what is it like now?

Newsom: It’s wholly dependent on how the kids are doing. When you have so many kids this age, someone’s sick, someone’s scared, someone’s in the bed with you, someone’s angry, someone woke up early because the other person woke them up earlier, someone can’t go to bed. … And then we just made the worst decision of all times. I did not make it. I’ll take responsibility for everything in this state because at the end of the day I’m accountable, except for the fact that the kids bought a rooster and now we have a damn rooster waking us up every morning. … My wife is complicit in this, and deep accountability is required. And I don’t know what to do to sanction. I could sneak in and steal the rooster, I can invite in the bobcat that got one of our chickens…

Me: What’s your go-to date with your wife, I guess in non-pandemic times?

Newsom: The last date Jen and I had, true story, not making this up. So cute. I have photos, actually. The kids decided to dress up in little mini suits, and they did a date night … They surprised us. They made menus and nameplates like “Mom,” “Dad,” then went downstairs — freezing cold — it was like a cold little basement thing but it was so cute. And they set up dinner and they made us dinner and they were the servers. … And of course they sat with us the whole time. They were like, “Do you like it?” I’m like, “It’s good, OK, get out of here!”

Me: What do you eat in a day, actually?

Newsom: Eggs in the morning, religiously. Banana. Two eggs minimum, sometimes as much as four. Coffee. … Chicken salad, unless I’m on the road — then it’s a chicken sandwich or a turkey sandwich. … That’s pathetic, I’m not even interesting. And then, at dinner, I’d eat pasta every single night of my life until the end of time. I would eat tortellini — I mean, just, whatever the pasta is. … Lasagna, come on. It’s like the greatest thing ever created.

Me: What does your typical Saturday look like when you’re able to, you know, do what you want to do? Like, how do you relax?

Newsom: I just started, after a year and a half of not being able to get anywhere — save, literally, one fated infamous place — and then, on my mother and dad’s graves, literally only two other nights that we went to a restaurant in the last 14 months. … Been stuck in the house. Like, it’s this place, this place or with you guys 24/7 — you heard those wonderful questions and how wonderfully happy everyone seems to be when they’re around me. And so my staff, to their credit, had a little intervention.

Wade Crowfoot in Natural Resources says, “You’re in Sacramento — you gotta get out!” And so I’ve been doing these hikes every Saturday, which has just been game-changing, up in the Auburn trails. … I’ve had poison oak now twice already. … My passion as a kid was photography. My obsession. … Now I’m back out taking these just spectacular — I’m just so proud — I’m obsessed with the ones I’m taking of all the wildflowers.

Me: I’ve always wondered this — do you drive yourself anywhere in your private life or do you always have someone (with you)?

Newsom: I’ve tried, I’ve tried to sneak out. We’ve had a few, uh — you guys, lovingly, don’t have any sense of the threats. I mean, it’s comical, it’s bad. I mean, the protests in front of the house are never-ending. It’s bad. … And I’ve had, I mean, just getting coffee, people — it’s very emotional now, very raw. We’re shoving again as a society over these last few years, so it’s a little more intense. So I’ve come to be a little bit more like, “I kinda get it.” We’ve had two in particular that were actually serious that made me go, “I’m going to listen to these guys.”

Me: How do you not crack under the pressure?

Newsom: This year’s been intense. I’m facing a recall … all my businesses are shut down for a year, employees, life, people are angry, stress across the board. Kids, their friends that don’t like me because their dads don’t like me. It’s intense. Life, right? Protests, the whole thing — it stacks a little bit. … When you know that at the end of the day, quite literally, no one cares — you have to move on, live your life, try not to hold grudges and remember that everybody else is struggling in a million different ways and their pain is unique and distinctive and just as profound. And you’re not a victim. I’m not a victim. We’re not victims. …

I’m really worried … in our society how this victimhood thing is taking shape. It’s a big part of the Republican Party. … It’s like the Republican Party’s been taken over by victimization, like mainstream media victimization. … I’m like, “My kids, you’re not victims. Don’t maintain a victim mentality. It’s decisions, not conditions, that determine your fate and future.” I keep saying that to them, and they’re like, “Oh, God.” And so that’s the resiliency that I want to see in them.