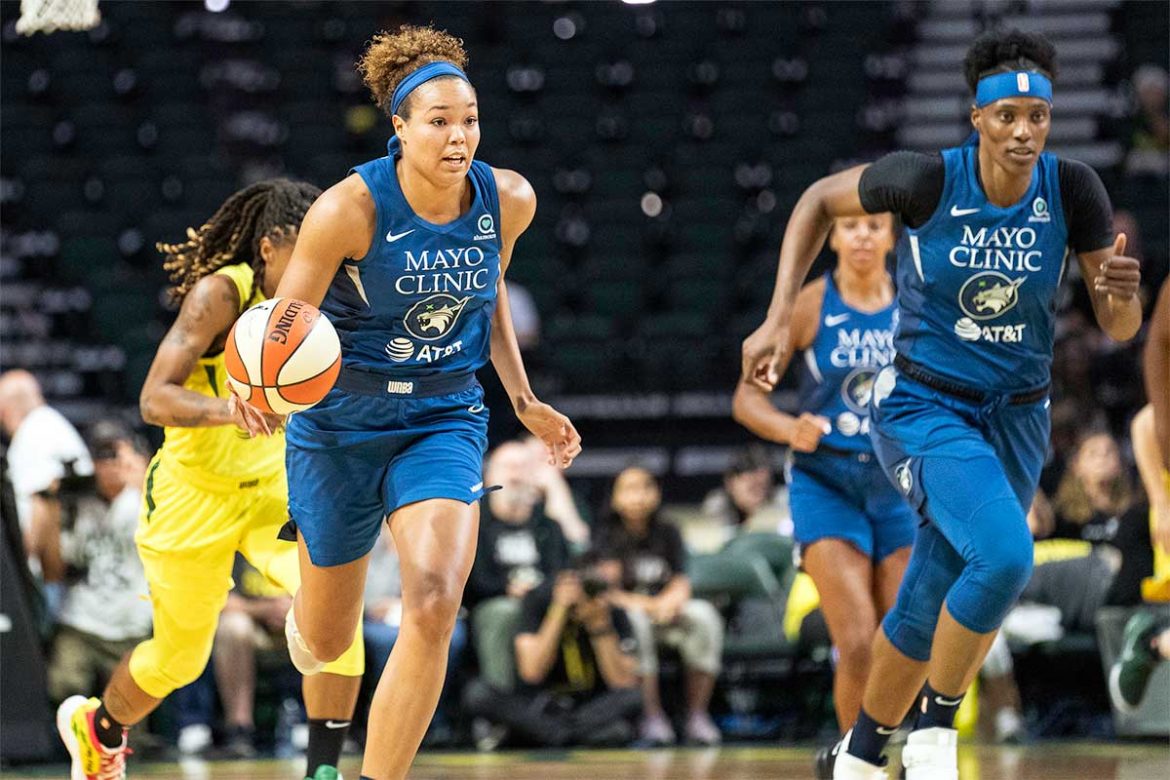 The Minnesota Lynx and Seattle Storm face each other in a Sept. 11, 2019, WNBA playoff game. The African American Sports and Entertainment Group has submitted a proposal to purchase Oakland's stake in the Coliseum complex and said this week it wants to bring a WNBA franchise to the city. (Photo by Lorie Shaull/Flickr)

Professional basketball and soccer may be coming to East Oakland and college basketball is already on its way, city and civic leaders said at a news conference Friday afternoon.

The news conference at noon at Everett & Jones BBQ in Oakland involved city and county elected leaders as well as the African American Sports Entertainment Group, which announced Friday it is working to bring a Women’s National Basketball Association team to the Oakland Arena.

“We got next,” was the theme Friday afternoon, a reference to Oakland as the next WNBA franchise location, echoed by city and civic leaders alike.

“We are absolutely ecstatic to be here,” said Ray Bobbitt of the AASEG, who emceed Friday’s announcement. “This is something special.”

Bobbitt’s goals include activating East Oakland with sports and a wide variety of economic development that will bring jobs to East Oakland residents.

“There’s cranes all over Oakland, but very few in East Oakland,” he said.

Bobbitt’s goals have the support of about 30 community organizations including 20 in Deep East Oakland.

The Oakland-Alameda County Coliseum Authority has the power to lease the Oakland Arena to the WNBA for games. The authority’s commissioners met Friday morning and decided to vote on that at their July 16 meeting.

Alameda County Supervisor Nate Miley, who chairs the authority, said of the possible WNBA franchise, “I don’t see a downside to this.”

Bobbitt and his team need to know whether they can lease the Oakland Arena before going back to the WNBA for a franchise. He said WNBA games could begin in 2023.

Oakland’s Vice Mayor Rebecca Kaplan was even more optimistic. She hopes games can begin next year.

Few details on professional soccer were given other than to announce efforts are underway. Oakland City Councilmember Noel Gallo is working on that effort. Soccer at the Oakland Coliseum could start right away, Bobbitt said.

Lincoln University, a 101-year-old college in Oakland, is officially a tenant at the Oakland Arena. A basketball team has already started training and the university is looking at two dates in October for games.

University officials want to have 600 student-athletes by the fall. More than 450 have already applied, so Gumbs said they are well on their way to reaching the 600-student goal.

Bobbitt said, “We are all tired of being sick and tired” of the way things are in East Oakland. Leaders cited the incessant dumping on city streets as one example of the problems in East Oakland.

Gallo also said Oakland will again have a National Football League team. All Oakland must do is apply for one of 10 openings in the league, he said. Bobbitt thinks a new NFL team could play in Oakland four years from now.