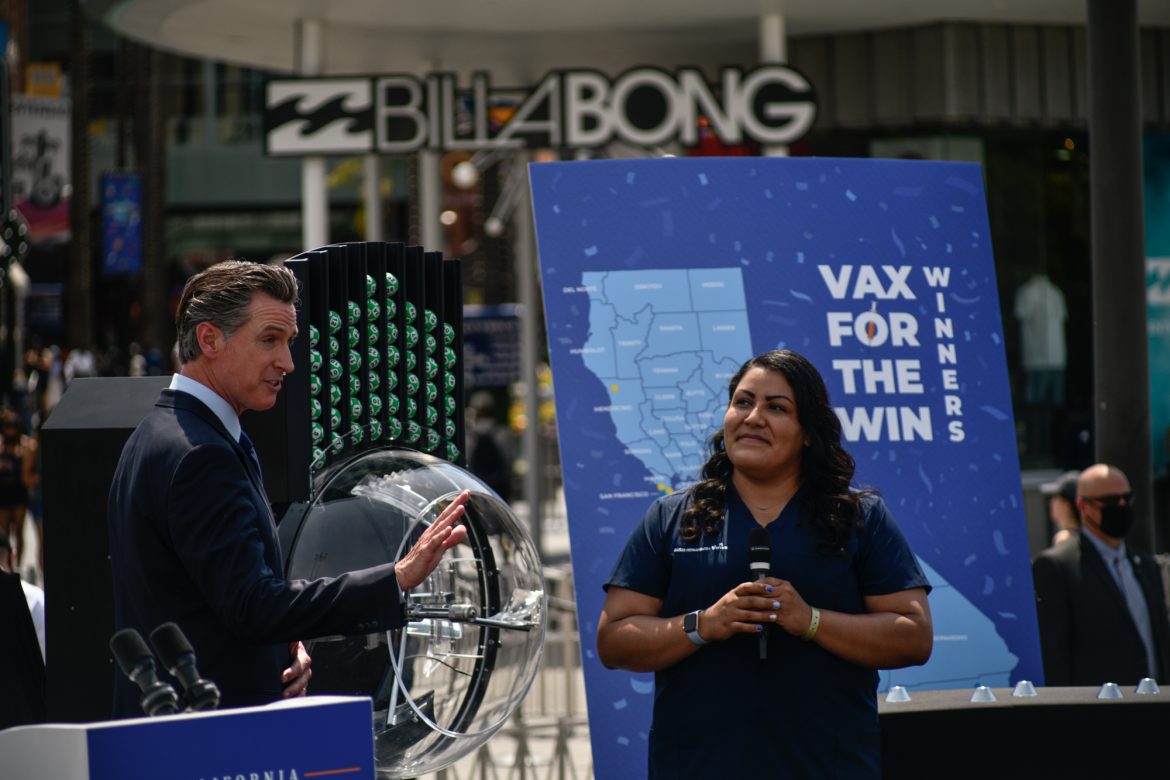 Gov. Gavin Newsom introduces Helen Cordova, the first person in California to get the coronavirus vaccine, on stage to celebrate Calironia's reopening at Universal Studios in Universal City, on June 15, 2021.

The state of California is paying itself $500,000 for administering Gov. Gavin Newsom’s vaccine lottery.

The news, which I first reported Thursday, comes about a week after Newsom wrapped up a whirlwind series of events in which he gave away millions of dollars and other prizes to encourage Californians to get the COVID-19 vaccine. It’s also the latest piece of information to cast doubt on whether the program’s results justify the cost: Recent data shows the lottery didn’t significantly increase the number of Californians getting their first shot.

Although the vaccine incentives were well publicized, the fact that the state would be required to pay the California State Lottery — which helped Newsom run the program — was not. In a Thursday letter to the California Department of Public Health, the lottery commission explained it must be reimbursed for spending money that doesn’t relate to its purpose, which is to fund public education.

H.D. Palmer, a spokesman for the state Department of Finance, told me California would repay the lottery commission with $500,000 from a General Fund account used for disaster response and emergency operations. However, the state will eventually reimburse itself with relief funds from the federal stimulus package President Joe Biden signed into law in March, Palmer said.

Most of the money related to the vaccine lottery will likely never come to light. California will pay out at least $116.5 million in prizes — including $1.5 million each to 10 individuals — but the state won’t share their names unless the winners give consent. Erin Mellon, a governor’s office spokeswoman, said the confidentiality of vaccination records also precludes winners’ names from being disclosed in public records requests.

Interestingly, the state isn’t paying itself in other areas of pandemic response. California businesses have paid only about 3% of fines levied by the state’s workplace safety agency for COVID violations, according to a Sacramento Bee investigation. Among those appealing their fines? The California Department of Corrections and Rehabilitation, which received a nearly $400,000 charge for transferring infected inmates to San Quentin State Prison and causing what was at one point the nation’s worst coronavirus outbreak.