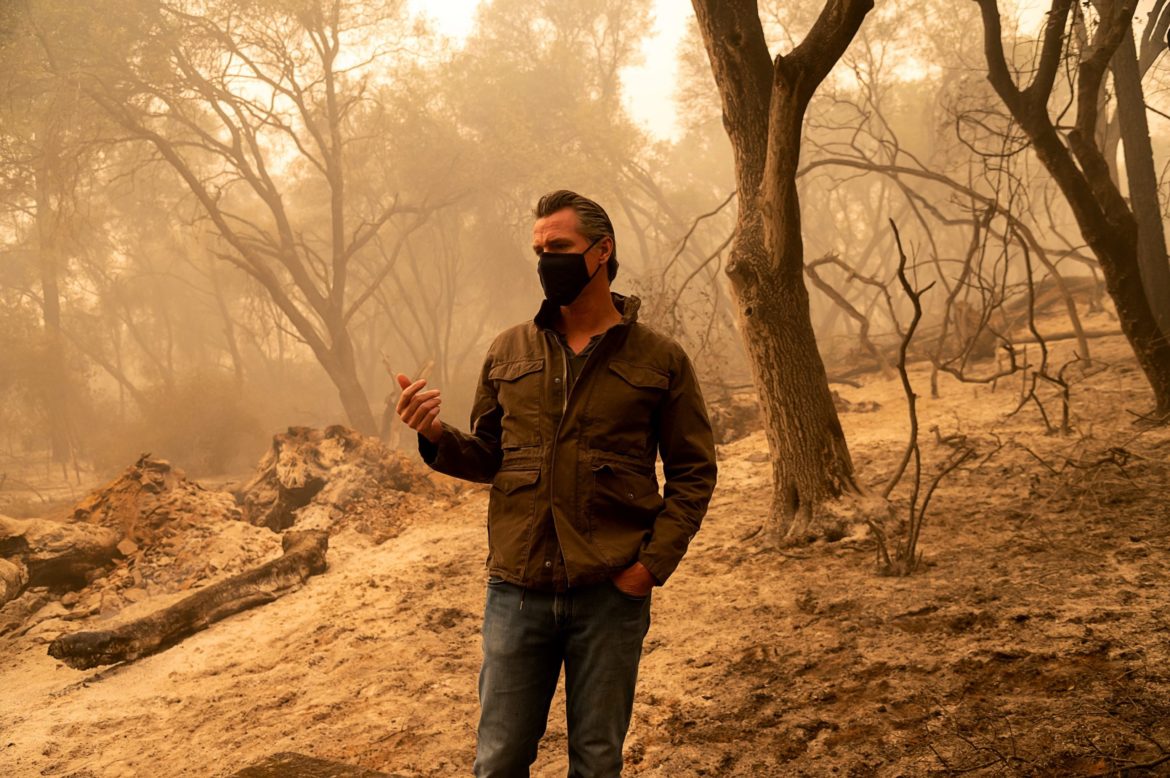 Gov. Gavin Newsom tours the North Complex Fire zone in Butte County on Friday, Sep 11, 2020, outside of Oroville. Newsom has declared a statewide emergency due to the widespread fires and extreme weather conditions, and secured a Presidential Major Disaster Declaration to bolster the state’s emergency response to the Northern California wildfires. Photo by Paul Kitagaki Jr., The Sacramento Bee

First came the CapRadio investigation that found the governor vastly overstated the amount of land treated with fuel breaks and prescribed burns to prevent wildfires from harming California’s most vulnerable communities. Newsom claimed in January 2020 it was 90,000 acres; the actual number was 11,399. Months later, California saw its largest fire season in recorded history — and experts say this year could be even worse.

Then came the announcement from Secretary of State Shirley Weber that only 43 Californians withdrew their signatures from petitions to oust Newsom from office. Nearly 1.72 million signatures remain — more than enough to trigger a recall election later this year. (Check out this explainer from CalMatters’ Laurel Rosenhall for next steps.)

The revelations in the CapRadio and NPR’s California Newsroom report — that Newsom exaggerated the state’s progress on fire prevention; that the state fire chief knew Newsom was sharing incorrect figures; that California’s fuel reduction efforts dropped by 50% in 2020 — could push Democratic lawmakers to continue accelerating the recall election. They took steps to do so earlier this month, likely in response to arguments that it could help Newsom avoid catastrophes — such as wildfire season — and stay in office.

Although Cal Fire Chief Thom Porter took the blame for the governor’s misleading statements, the fire report fueled Newsom’s GOP recall opponents, with former San Diego Mayor Kevin Faulconer saying it’s “even more clear that he is in over his head and unable to lead California.” Newsom himself remained mum — though on Monday his press office posted a tweet thread highlighting his “bold action to combat & prepare for the upcoming wildfire season.”

Even as Newsom takes heat from the right for incorrect numbers, he’s taking heat from the left for outdated ones. In response to a Monday New York Times article highlighting Newsom’s plan to pay 100% of pandemic rent debt for low-income tenants — originally unveiled in May — San Francisco Supervisor Dean Preston slammed the governor on Twitter.