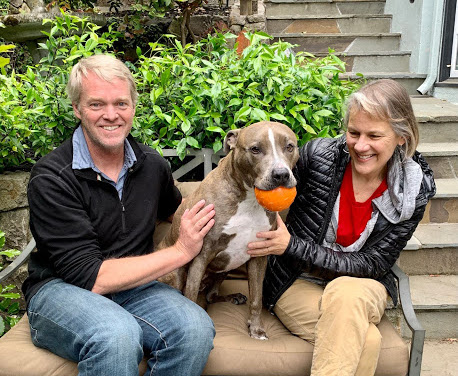 Adoption Story: I (Suzie) stalked this handsome pittie named Deuce on Instagram. He was at the Friends of Alameda Animal Shelter, and my husband, Lars was intrigued but felt the timing wasn’t right. However, when I saw he was still not adopted a few weeks later, I just had to go meet him. Bowie seemed to have a damaged spirit but I wasn’t deterred. My husband came out to meet him and the rest is history!

Likes: “Ball is LIFE” is Bowie’s motto. He also requires a nightly lullaby with a burrito tuck-in before nodding off. Giving lots of slobbery kisses is probably his third favorite thing on earth!

Dislikes: He’s not a fan of delivery folks at the door. Also, it makes him sad that people are so scared of him just because of what he looks like.

Interesting Facts: Bowie’s most interesting physical trait is his “sploot.” This is the ability to lay down with front legs straight in front and back legs pointing straight out the back creating a 15 foot-long pit bull barrier. He also sploots off the couch rather than jumping off. Sometimes he stops mid-sploot, front legs on the floor, back legs trailing behind on the couch still. This all requires a very high skill level.

Anything else? Oh yes! The song we sing at night is called “The Best Baby Boy Song” sung to the tune of Pomp and Circumstance with made up lyrics which change on the whim of the crooner. This is indeed his favorite time of the day ♥️