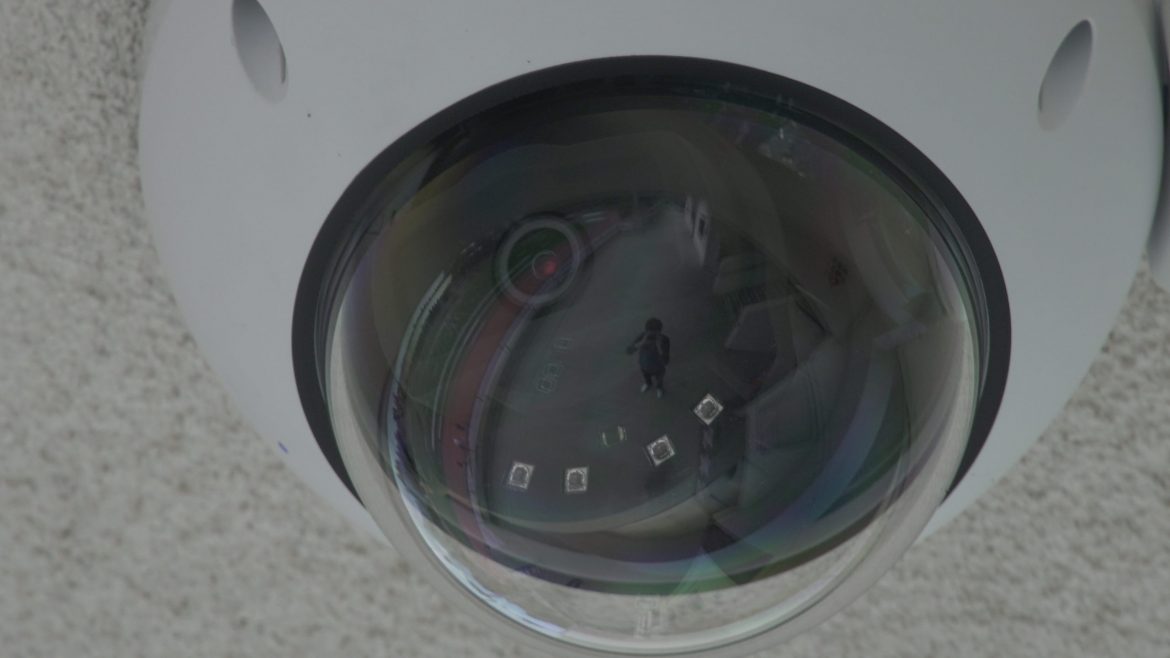 Someone was watching Ms. Foster.

On Feb. 24, school was quiet and absent of students. On her way to the 30’s building, English teacher Mercedes Foster said she passed through the nearly-finished STEAM building without seeing any other school staff. Five minutes after arriving at her classroom, she received a call from Piedmont Unified School District (PUSD) director of facilities Pete Palmer.

“For a month, I had been emailing him and waiting for an answer on something,” Foster said. “What are the odds that he would call me?”

She said Palmer told her that he spotted her on the campus security cameras, which he was monitoring as part of a construction process happening that day at the STEAM building.

According to Board Policy/Administrative Regulation 3515 from the PUSD Board of Education, “The Board believes that reasonable use of surveillance cameras will help the district achieve its goals for campus security.”

Palmer said that the cameras’ main purpose is to record vandalism and damage of school property.

“We are doing our best to keep PUSD students and staff as safe as possible along with protecting all PUSD property from theft and vandalism,” Palmer said in a later email. “The security cameras installed throughout the District have been [an] integral part of this plan.”

However, he said he did not want to tell the public where cameras have been installed on campus.

TPH found that there are at least 14 cameras currently on the PHS and MHS campuses, including Witter Field. Four of these cameras are on the exterior of the new STEAM building and were installed between late 2020 and early 2021.

According to Regulation 3515, the Superintendent or a designee must also send prior written notice to students and parents about the existence of a surveillance system, locations where people may be surveilled, and how the recordings may be used in disciplinary proceedings.

“I think we sent an email home to families and a copy of the policy,” PUSD Superintendent Randall Booker said. “I remember sending something out [in 2018].”

However, since the policy was adopted on May 9, 2018, TPH has found no written notices sent to students, parents, or teachers about the specific locations of the surveillance cameras or their disciplinary purposes.

Also according to the policy, “Prior to the operation of the surveillance system, the Superintendent or designee shall ensure that signs are posted at conspicuous locations at affected school buildings and grounds.”

On March 2, TPH found no such signs on the PHS campus. However, some signs were put up with yellow masking tape starting March 5. According to Palmer, signs are continuing to be put up but have been delayed due to campus changes from construction.

Of the six teachers and nine students that TPH interviewed in Feb. and March 2021, not one of them said they were aware of the existence of security cameras on campus.

Where did they come from?

When asked to identify the security cameras’ brand, Booker, principal Adam Littlefield, and assistant principal Erin Igoe said they were not able to specify the company from which the cameras were purchased. Palmer said that he did not want to identify the cameras’ manufacturer because of a concern that making such information public could lead to hacks.

After independent research and investigation, TPH concluded that at least 13 of 14 cameras on the PHS and MHS campuses are “Dome Series” cameras from Verkada, a San Mateo-based company that specializes in Internet-connected surveillance cameras, facial recognition technologies, and artificial intelligence-powered analytics.

“Verkada cameras have an intelligent archiving feature that remembers every face that enters the camera frame,” according to Monarch, a San Francisco company that sells Verkada products. “The faces are categorized and given ‘names’ for easy search access [and the technology] is so advanced it can even accurately detect faces wearing masks.”

A Verkada sales brochure for K-12 schools also said that Verkada cameras can filter footage for motion, clothing color, vehicle type, and even the number of people in a room.

Booker, Littlefield, and Igoe all said that they do not know if the campus cameras have these technologies.

Palmer said that he knows the cameras have facial recognition and artificial intelligence capabilities, but such technologies are currently turned off on the PHS and MHS cameras.

“The facial recognition— that’s a pretty big invasion of privacy,” Palmer said. “I can’t ever see that happening here.”

However, Palmer said the cameras’ technologies are capable of recognizing every PHS and MHS student.

“Again, I can’t see that happening,” Palmer said. “But it has the ability to do that.”

Palmer said that there would be changes to the Board Policy if the Board were to turn these features on, and Booker said no changes are being considered currently.

However, the Policy and Regulation do not explicitly prohibit facial recognition or artificial intelligence.

Booker said the Board’s approval of surveillance cameras was mainly to deter and apprehend perpetrators of theft and vandalism.

“We knew we were going to have to install security cameras for all of the construction,” Booker said. “We also have endured quite a bit of vandalism, but also break-ins and thefts. So, we felt it was time to be proactive.”

According to Board Regulation 3515, some of PUSD’s safety goals include securing the campus from outsiders, discouraging graffiti, and intervening with school crime.

“We had people walk into the gym during school,” Booker said, referring to an August 2019 theft at Binks Gym. “Adults stole backpacks and left.”

Booker said that the thieves were apprehended, as they were caught on security camera footage that was handed over to the police.

In addition to repeated thefts at Witter Field and vandalism across PUSD campuses, Palmer said that one incident at Havens Elementary involving students building makeshift ladders to climb onto the roof necessitated a camera for the purpose of deterrence.

“All it could take is one wrong step climbing on tile roof—which is extremely slippery—and at a minimum, they’re going to have broken bones,” Palmer said. “We put a camera up so we could see when kids start building ladders. As soon as we put the camera up there, the kids knew it, and the behavior stopped.”

With campus reopening, Palmer said that the cameras are also used to monitor construction workers’ entry and exit at the STEAM building. If a problem arises, Palmer said he can escort workers off campus.

“We really don’t want interaction between students and construction workers,” Palmer said. “That’s the general rule. They’ve been so used to going in and out at their leisure. That’s another reason why we’ll watch the security cameras when there’s some sort of issue.”

Booker said that footage can be reviewed retrospectively after an incident.

“I don’t have someone to person the cameras all day long,” Booker said. “We don’t have the staff for that, or the desire.”

Palmer said that footage can also be accessed live on his phone and that recordings are automatically deleted after 30 days.

“It’s in the cloud for the camera manufacturer,” Palmer said. “If somebody rips off one of the cameras, there’s no access. It’s not on anybody’s hard drive.”

However, Measure H-1 Bond Coordinator Michael Brady said that, in addition to PUSD’s cameras, Overaa Construction has also installed cameras to oversee their job sites at the new STEAM building and unfinished Performing Arts Center. Brady said that both Palmer and Overaa’s construction superintendent have access to those cameras, but Palmer said that Overaa does not have any cameras on campus.

Palmer and Booker said the campus cameras are on 24/7, including during school hours.