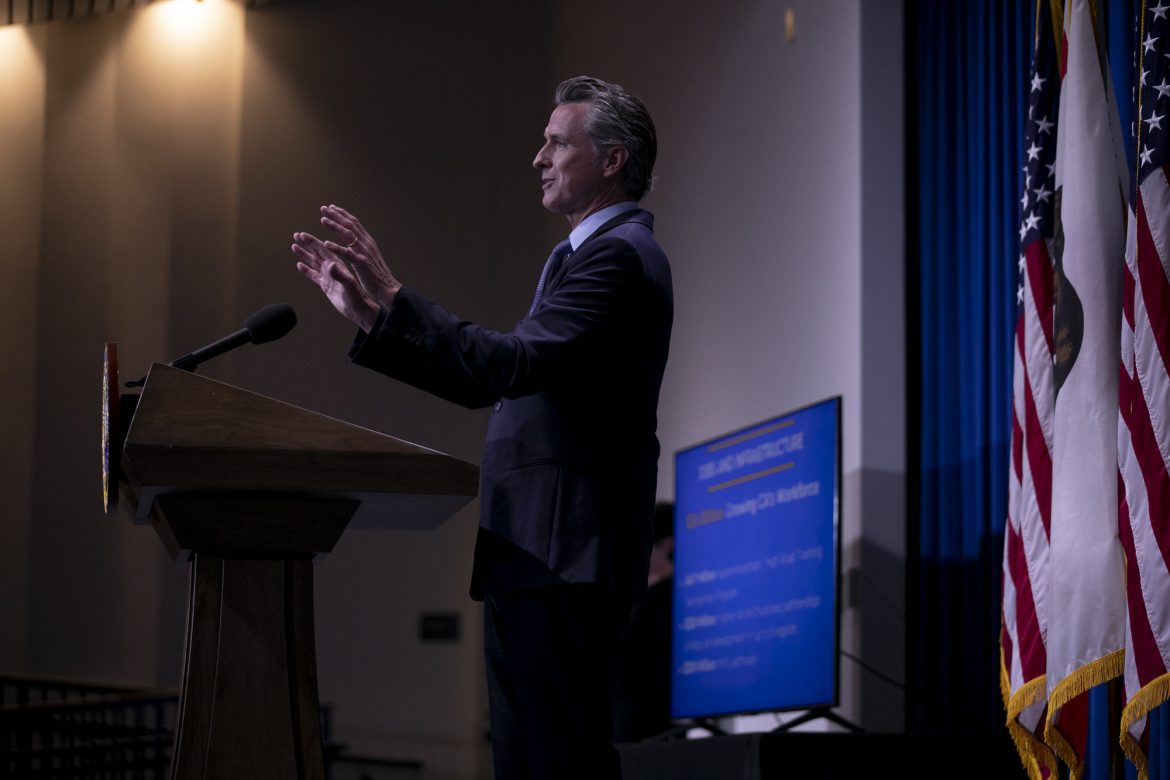 Gov. Gavin Newsom presents the breakdown for the $267.8 billion budget revise in a program dubbed ‘California Roars Back’ at the Secretary of State building auditorium in Sacramento on May 14, 2021. The budget focuses large allotments toward education, housing and climate resiliency measures. Photo by Anne Wernikoff, CalMatters

He wants to spend $12 billion to house the homeless, the governor announced in the lobby of a San Diego motel converted into a shelter; $3.4 billion to expand preschool to all 4-year-olds, he said on the playground of an elementary school in Monterey County; $1.5 billion cleaning up blight, he said as TV news crews filmed him hoisting an old mattress off the side of a Los Angeles freeway.

The announcements — capitalizing on a $76 billion surplus in the state budget plus $27 billion in federal aid — amounted to a very convenient marriage of governing and campaigning for the first-term Democrat, who almost certainly faces a Republican-led recall election this fall.

“It would be odd if he wasn’t doing this,” said Rob Stutzman, a GOP consultant who managed communications for former Gov. Arnold Schwarzenegger. “He’s got more money than he can stuff in the mattress. You get to hand it out, you get to tailor it to multiple constituencies and pretty much make everybody happy.”

It’s a strategy other governors have deployed to sell their spending priorities to voters, Stutzman said. But the specter of the looming recall — combined with the unusual hardships of the last year and the enormous windfall of money — have added some drama to what’s normally a routine step in the annual budget-making process at the Capitol.

Newsom is scheduled to roll out the rest of his updated budget proposal today, with a presentation that allows him to flex his wonk muscles before heading into the final month of negotiations with lawmakers. Here are some key things to know.

Trumpeting an additional $1.5 billion in grants for small businesses and $20 billion to expand preschool, summer school and afterschool programs, Newsom’s proposals seem designed to appeal to business owners and parents, groups that struggled during more than a year of on-again off-again shut-downs intended to stem the spread of the virus.

“This pandemic has not impacted all of you equally,” Newsom said in a speech Thursday to the California Chamber of Commerce. “I’m very mindful that it’s impacted, disproportionately, women.”

Newsom’s school funding proposal includes $4 billion to address behavioral health — an acknowledgment of the depression and anxiety that many children have experienced during the isolation and stress of the pandemic.

But the gusher of money may not be enough to mollify parents who are frustrated that so many California schools still have not fully reopened. Only 13% of kids are in the classroom five days a week, even though the state has among the nation’s lowest infection rates.

“There are still a lot of us who are still in a place where we are not ready to forget about what happened this year because our kids have really suffered,” said Megan Bacigalupi, an advocate with Open Schools California, whose children attend public schools in Oakland, where they go to class just five hours per week.

“Until school is back for all kids five days a week, all of this investment doesn’t really resonate.”

A recent poll shows that 83% of California public school parents think kids have fallen behind in the last year. Still, a strong majority said they approve of Newsom’s management of the schools during the pandemic.

One constituency that Newsom has not yet addressed: public employee unions who will likely spend big to help fight the recall. Most state worker unions agreed to a 9% pay cut last year when state officials feared a more broad-based recession at the start of the pandemic. Newsom could restore that money in the new budget, and potentially hand out salary increases.

It’s true that he’s highlighted some issues that those who want to throw him out of office have hammered on, such as blight, homelessness and business closures.

But a closer analysis reveals that many of Newsom’s latest proposals are lifted from his pre-pandemic budgets and campaign ads. In other words, he’s trying to do what he’s long said he wanted to — now that he has the money to do it.

His proposal to give children from low-income families $500 in a college savings account builds on a smaller program he launched in 2019, which itself builds on a program he championed as San Francisco mayor. His plan to make preschool available to all 4-year-olds echoes a promise from his 2018 campaign, when he ran an ad showing a cherubic child building a tower with blocks and said he wanted to make California a place where “every toddler can attend preschool.”

Newsom’s $12 billion plan to alleviate homelessness hearkens back to February 2020, when he made the issue the focus of his State-of-the-State speech and never mentioned the emerging coronavirus that would wind up derailing his plans for the year.

What remains to be seen, however, is whether Newsom will use the flush budget to try to spur construction of more housing. When he campaigned for office, he pledged to build 3.5 million units of new housing by 2025. But so far the state hasn’t even come close.

“Housing costs are through the roof despite Newsom’s 2018 campaign pledge to build more housing,” Patterson said.

Newsom may not get everything he wants

Crafting a state budget is a three-way dance between the governor and the two houses of the Legislature, who will spend the next month negotiating until lawmakers pass the final spending plan in mid-June. The process always involves some give and take, even when — as has been the case for several years — all the players involved are Democrats.

“The devil is in the details,” said Democratic Assemblymember Lorena Gonzalez of San Diego. “We will end up in a similar place on expenditures, and the difference will be in the implementation and how we achieve the goal.”

Assembly and Senate leaders have their own priorities. Gonzalez and other powerful lawmakers have been pushing for years to expand Medi-Cal health insurance to cover undocumented seniors, and are eagerly waiting to see if Newsom includes it in his proposal.

Some lawmakers will undoubtedly probe Newsom’s plans to spend money over several years when the deluge of cash probably won’t last that long. The state could face a lawsuit over Newsom’s proposal to send $600 checks to Californians who make less than $75,000, with taxpayer advocates saying it may not meet the state constitution’s requirements to refund taxpayers when state revenue hits a certain threshold.

With the recall election still months away, another gubernatorial road show seems inevitable once the budget is passed and the money starts flowing.