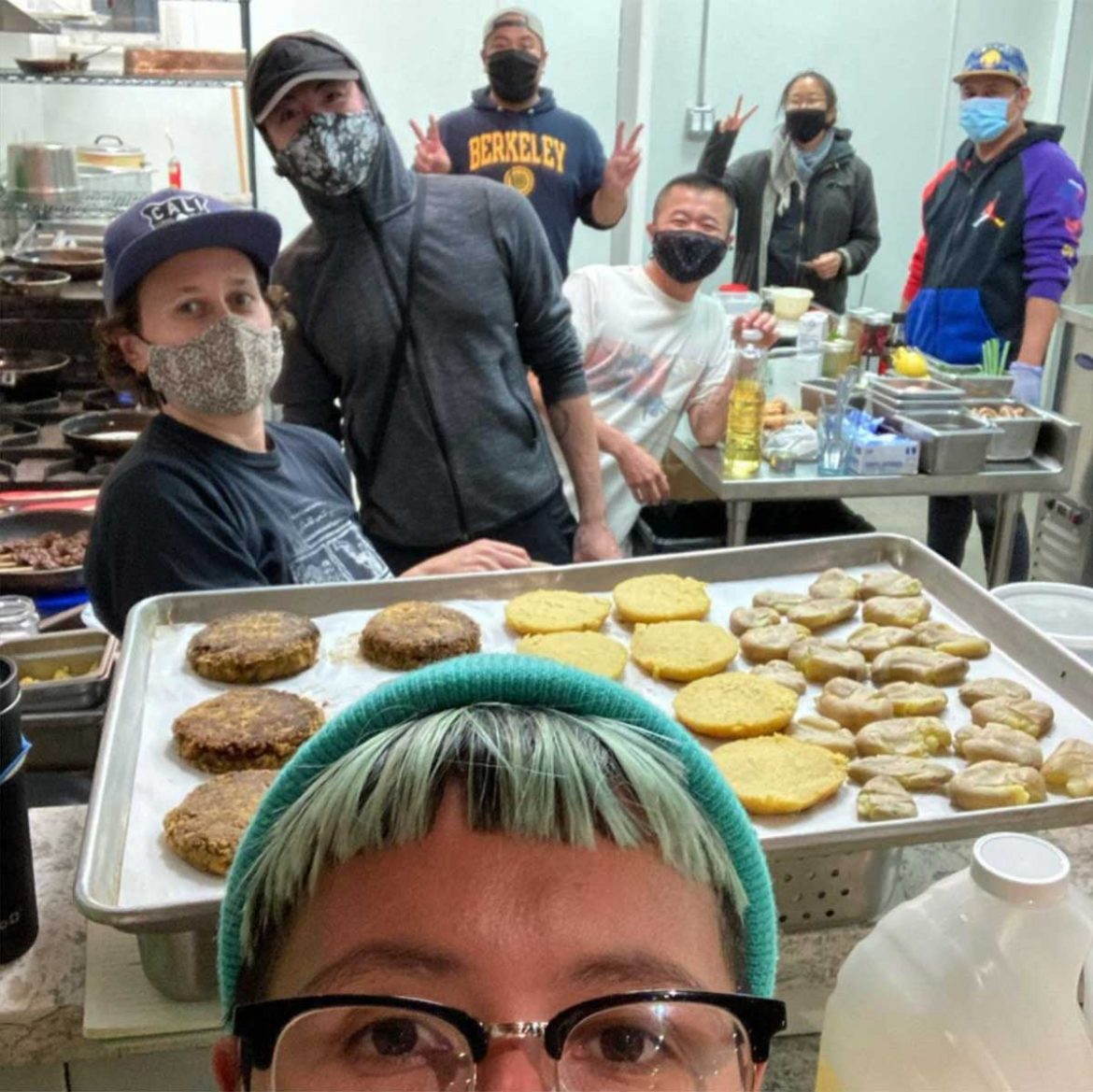 Members of the Understory restaurant crew are pictured with some of the food prepared in their Oakland restaurant. (Photo courtesy of understoryoakland/Instagram)

When the pandemic hit, Jenabi Pareja — like most of his colleagues working for Bay Area restaurants — lost his job. He quickly transitioned to cooking and selling food through pop-up events in his home. “I was feeling the brunt of the pandemic and trying to figure out what I wanted to do next,” he says.

He became connected to the 8th Street Collective, a loose organization of Oakland residents, most of whom lost their jobs in the food industry and became active in local food distribution and mutual aid. This summer, the collective had an opportunity to fill an empty commercial space in Old Oakland where a restaurant wasn’t able to complete construction as planned. “We were talking about a potentially shared kitchen space, where folks could do pop ups and we could figure out what a new model could be,” Pareja says.

That vision has since resulted in Understory, a new restaurant, bar and shared kitchen that is working to become cooperatively owned. It will also serve as home base for the nonprofit Oakland Bloom, which runs a variety of programs to support immigrant and refugee chefs.

The 8th Street Collective envisions that the operation of the restaurant and the nonprofit’s programming will complement one another and result in a nontraditional restaurant and community hub. “I think we’re here to really disrupt the current offerings from the food industry,” as Pareja says.

Oakland Bloom, founded by Seanathan Chow in 2015 to create economic opportunities for refugees and immigrants looking to start their own businesses, has long sought a permanent space to run food-based programming. Its flagship program, a year-long food business incubator and training program called Open Test Kitchen, “hasn’t had a formal kitchen to work out of,” according to Florencio Esquivel, who handles communications for Oakland Bloom and is a member of 8th Street Collective.

During the pandemic, the nonprofit got even more creative to continue its work. Open Test Kitchen shifted its focus on one-on-one specialized coaching and training sessions, practiced at safe social distances. The nonprofit started a Pay It Forward program to connect chefs to opportunities to cook meals for mutual aid and distribution efforts in West and North Oakland. That work happened in underused restaurant kitchens around the city.

Oakland Bloom also supported development of the 8th Street Collective to harness their mutual aid cooking and channel it into a vision for a shared kitchen collective that would support immigrants, refugees and others marginalized within the food industry. In June, plans for a restaurant that Chow was part of pivoted — in response to hardships presented during the pandemic — to a cooperatively-owned and operated model.

Oakland Bloom was the main source of financial support with labor from the 8th Street Collective to complete construction and roll-out of the 2,000-square-foot space. While the original investors remain on the project as silent investors, 8th Street Collective is working closely with the East Bay Community Law Center to transition ownership to four “worker leaders”: Esquivel, Pareja, Niño Serrano and Lily Fahsi-Haskell. The team, alongside Oakland Bloom representative Diana Wu, will then operate Understory as a cooperative business.

Though it’s not officially a cooperative yet, all decision-making is rooted in cooperative and mutual aid values. “We’ve seen a lot of our friends losing work during the pandemic,” Esquivel says. “We’re approaching this with the mindset of mutual aid and making sure everyone is succeeding — not just one person.” As Pareja puts it, “We are valuing what it means to have liveable wage and access to healthcare, when the majority of food work rarely offers healthcare benefits.”

The team of four worker-leaders rotates operational roles of Understory, which opened in mid-March, including front and back of house, finances and marketing. Since they all have food backgrounds, the team decided on a pop-up style, two-week rotation for the menu: Pareja and Serano collaborated on the first rotation offering Filipino; Fahsi-Haskell will offer a Moroccan-influenced menu with a special dish in observance of Ramadan; Esquivel designed an all vegan Mexican menu with a focus on pre-colonial ingredients.

“We get to highlight and cook each other’s food,” Pareja says. “This is what shared skills and shared labor looks like.”

Each menu rotation will include items from Oakland Bloom chefs. The first menu included a tea leaf salad from Chef Pa-Wah, from Karen State. The next rotation will feature Eritrean sambusas and Bosnian truffles. On Sundays, a different Oakland Bloom chef will take over the kitchen to showcase their cuisine, grow their following and gain experience running a restaurant with support from Understory workers.

Understory will only operate as a restaurant between Thursday and Sunday; while it’s closed the space will serve as the home base kitchen for Open Test Kitchen, Pay it Forward and other community programming. “This is a space where we can come together, build community, and showcase chefs in the Oakland Bloom program,” Esquivel says.

Once the cooperative business model is in place, they hope to offer ownership shares to the immigrant and refugee chefs who participate with Oakland Bloom. “The overarching goal is to create a model that other places can adopt that really empowers the voices of workers,” says Esquivel. “They may be worker-owners or not, we still want to offer a lens to labor practices and advancing worker rights.”

For Pareja, too, the pandemic laid bare how the restaurant industry doesn’t empower marginalized workers — and offered an opening to provide an alternative. “We’re hoping to pioneer this kind of model that puts people first,” he says. “And I’m hoping in the future more restaurants choose to follow.”

This story is part of the SoJo Exchange from the Solutions Journalism Network, a nonprofit organization dedicated to rigorous reporting about responses to social problems.