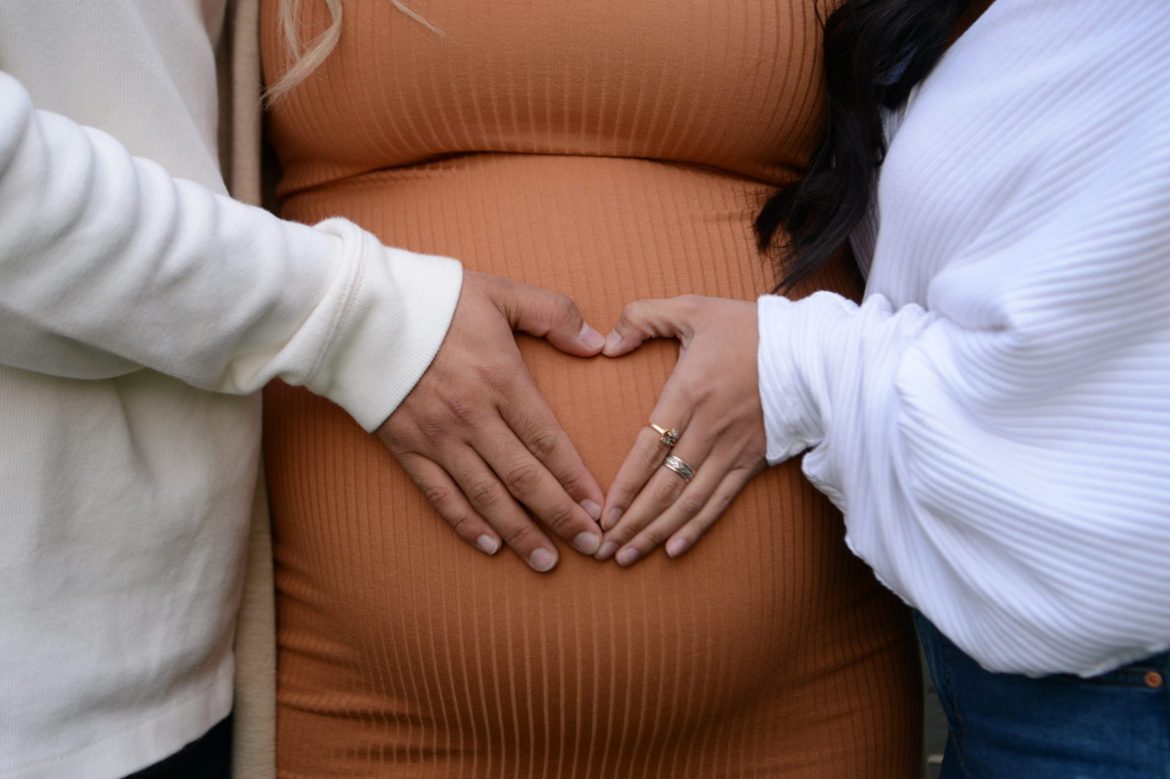 A pregnant woman and friends pose for a photo at a baby shower on November 10, 2018 in Pittsburg, Calif. (Ray Saint Germain/Bay City News)

Researchers at University of Oxford and University of California at Berkeley have found a significantly higher risk of severe complications than previously known for pregnant women with COVID-19 and for their newborns.

The study released last week found that women who had COVID-19 and displayed symptoms of the virus during their pregnancy were more than 50 percent more likely to experience complications — such as premature birth, pre-eclampsia, admission to intensive care and death — compared to non-infected pregnant women.

In addition, the study found that the largest risk is premature birth, where newborns of infected women are “nearly three times more at risk of severe medical complications, such as admission to a Neonatal Intensive Care Unit – mostly due to premature birth.”

Led by Oxford researchers, the study was published recently by the Journal of the American Medical Association in JAMA Pediatrics. It included 2,100 pregnant women in 43 maternity hospitals across 18 countries worldwide, according to an Oxford news release.

Researchers said the study is unique because each woman affected by COVID-19 was compared to two non-infected pregnant women giving birth at the same time in the same hospital.

The findings highlight the need to prioritize the health of pregnant people when developing public health measures, the researchers said.

“We now know that the risks to mothers and babies are greater than we assumed at the start of the pandemic and that known health measures when implemented must include pregnant women,” said Stephen Kennedy, an Oxford professor of reproductive medicine who co-led the study.

Despite low numbers of deaths among the patients, the risk of dying was 22 times higher for the women who had symptomatic COVID.

The good news is that the study also found that pregnant women who had symptomless COVID infections had very similar results as non-infected pregnant women.

The statistical analysis for the study was conducted by researchers at the School of Public Health at UC Berkeley, led by Robert Gunier, an assistant researcher, and Stephen Rauch, a data analyst at Berkeley Public Health.

“Luckily, we found that COVID-19 positive people who were asymptomatic had mostly similar outcomes to people that were COVID-19 negative,” Gunier said in a statement released last week by UC Berkeley.

The study found the impact on newborns was less significant than on their mothers. While babies born to mothers who had symptomatic COVID-19 were more likely to develop complications, only 12.9 percent tested positive within the first few days of birth. In addition, breastfeeding did not appear to increase the risk of infection.

“We now know that the risks to mothers and babies are greater than we assumed at the start of the pandemic and that known health measures when implemented must include pregnant women,” said Oxford’s Kennedy. “The information should help families, as the need to do all one can to avoid becoming infected is now clear. It also strengthens the case for offering vaccination to all pregnant women.”