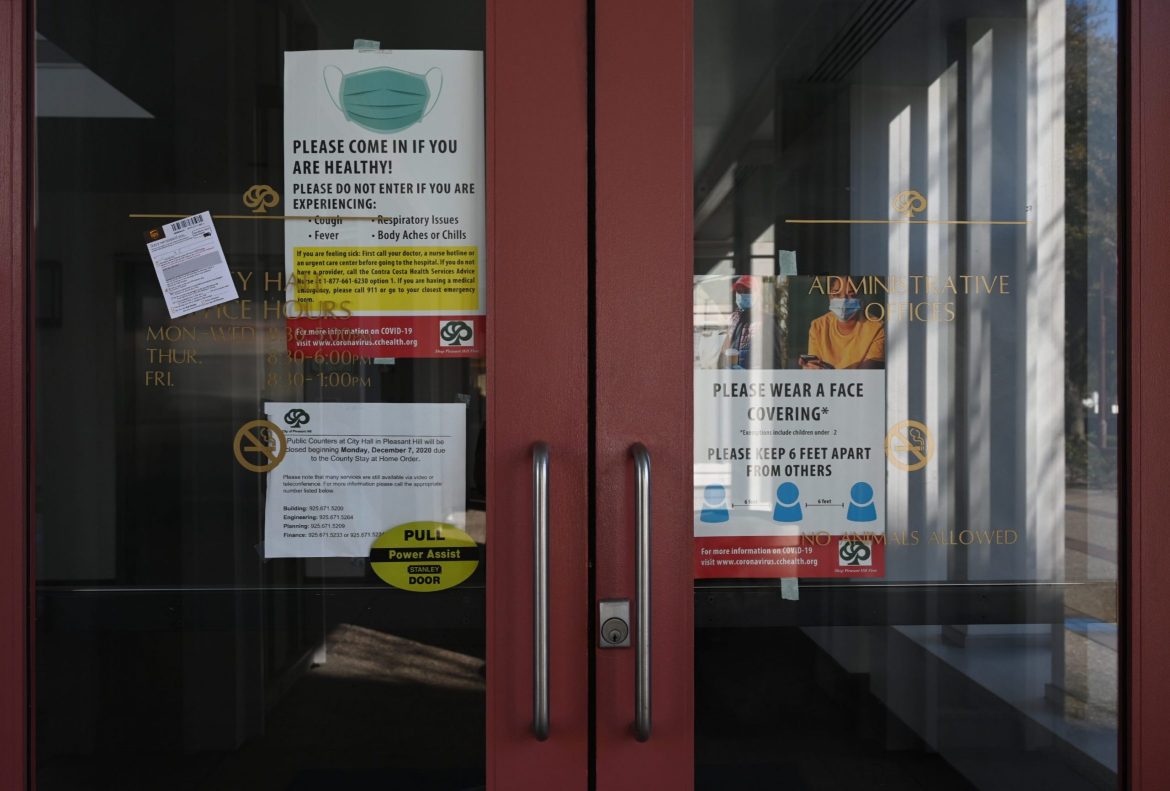 Signs requiring the use of masks and other face coverings at Pleasant Hill City Hall at 100 Gregory Lane in Pleasant Hill, Calif. on March 5, 2021. (Samantha Laurey/Bay City News)

California will wait until next month to implement recent masking guidance from the U.S. Centers for Disease Control and Prevention for fully vaccinated people, state officials said Monday.

State Health and Human Services Secretary Dr. Mark Ghaly said the state will begin enforcing the new CDC guidance, which permits fully vaccinated people to forego wearing a mask both indoors and outdoors in most situations, on June 15.

June 15 is also when the state plans to lift its arcane tiered reopening system, formally called the Blueprint for a Safer Economy, allowing businesses to expand back to their full indoor capacities.

“This four-week period will give Californians time to prepare for this change while we continue the relentless focus on delivering vaccines, particularly to underserved communities and those that were hard hit throughout the pandemic,” Ghaly said Monday during a media teleconference briefing.

The CDC issued its updated guidance Thursday, stating that it was safe for people who are at least two weeks past their last vaccination date to not wear a mask or practice social distancing.

California’s mask mandate requires people to wear a face covering at all times indoors or on public transit, regardless of vaccination status, unless actively eating or drinking.

Outside, state residents are not required to wear a mask or other face covering as long as they can maintain proper distance between themselves and others, regardless of vaccination status.

Ghaly argued that the state was not questioning the safety or timing of the CDC’s guidance by waiting until June 15 to lift California’s mask mandate.

Rather, state health officials plan to use the next month to determine to what extent the state will enforce some masking rules and how it will do so.

“It’s in no was saying the science or the direction by the CDC is wrong or there’s a challenge to it,” Ghaly said. “It’s really just giving ourselves across the state some additional time to have it implemented with a high degree of integrity with a continued focus on protecting the public health in mind.”

The state keeping its masking guidance in place for the next month will also apply to businesses, even if some have already announced they will adhere to the CDC’s guidance.

Between the CDC’s announcement on Thursday and Monday’s announcement by state officials, Walmart, Trader Joe’s and Costco announced they would not require fully vaccinated customers to wear a mask indoors.

“The CDC has given states a chance to guide how (the new guidelines) get implemented,” Ghaly said. “So we expect businesses in California to adhere to where the state is, and move to implement these standards and prepare for them on June 15 as opposed to now.”

After June 15, Ghaly said the state may still deem it necessary to restart the mask mandate if coronavirus cases flare up.

Local jurisdictions and businesses will also have carte blanche, more or less, to require face masks indoors or in certain situations.

More than 34.5 million vaccine doses have been administered across the state since the coronavirus vaccines first became available in mid-December.

Roughly 15.6 million state residents – 49 percent of the state’s population – are fully vaccinated, according to state vaccination data. Another 4.7 million – 15 percent of the population – have received the first dose of either of the two-dose vaccines developed by Moderna and Pfizer-BioNTech.

“We continue to urge from the mountaintops, if you will, all Californians to get vaccinated to ensure that infections and hospitalization rates remain low across the state and that we can all return to those activities we love and have been missing for so long,” Ghaly said.