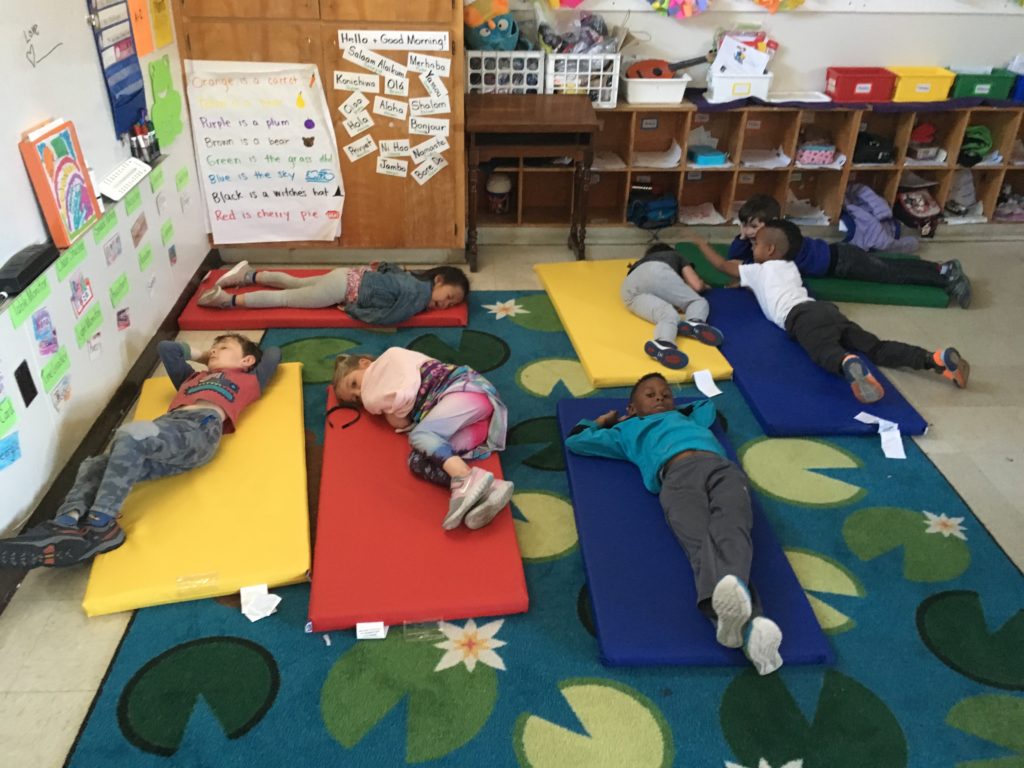 Early childhood advocates, lawmakers and the governor are pushing to gradually expand transitional kindergarten (TK) to all the state’s 4-year-olds. But the moves are raising issues, such as the viability of the child care system and whether expanded TK might be too academic for younger 4-year-olds.

Often described as a bridge between preschool and kindergarten, transitional kindergarten began in California in 2012. The program, often referred to as TK, now serves about 100,000 children, most of whom turn 5 between Sept. 2 and Dec. 2, narrowly missing the cutoff for traditional kindergarten.

Gov. Gavin Newsom announced Wednesday that he plans to use an unanticipated surplus in the general fund to phase in universal TK as part of his annual May budget revision. Starting in 2022-23, the program would roll out in annual increments, first to children turning 5 by March 2, then in 2023-24 for birthdays by July 2 and finally in 2024-25 for full implementation at an additional annual cost of $2.7 billion.

Meanwhile, two bills in the Legislature capture the spirit of the Master Plan for Early Learning and Care and align with President Joe Biden’s campaign for universal preschool as a way to set children up for success in K-12.

“This is a giant step for California families, moving toward serving all 4-year-olds with quality preschool,” said Bruce Fuller, professor of education and public policy at the University of California at Berkeley. “Gov. Newsom remains keenly focused on a wise investment, despite all the nettlesome challenges he’s faced in the past year.”

Some early childhood advocates worry that expanding TK might undermine the child care system and also put too much academic pressure on young children who may not be developmentally ready for it. Others view this groundswell of support for early childhood education as unprecedented and heartening. They see it as a game changer because research shows that high-quality early learning can impact school readiness, high school graduation rates and even earning potential.

“We are very excited. This is the first time since I’ve worked in this field that we’ve seen such bold, historic proposals,” said Patricia Lozano, executive director of Early Edge California, a nonprofit organization that is co-sponsoring Assembly Bill 22, which would expand transitional kindergarten.

“Our vision is that every child, no matter where they are born, no matter the color of their skin, will have all the opportunities to prepare them for kindergarten and for success in life.”

Assemblyman Kevin McCarty, D-Sacramento, has been pressing for a package of early childhood education bills, including Assembly Bill 22, to gradually expand transitional kindergarten to all the state’s 4-year-olds. Senate Bill 50 would open access to the state-funded California State Preschool Program (CSPP), which serves low-income children, to ages 3 and under, who could take the slots no longer filled by 4-year-olds, who would move to TK.

The bills are part of an “education package to lift up working families and our kids throughout California,” said McCarty, chairman of the Assembly Budget Subcommittee on Education Funding. “We all know that early education matters from kindergarten readiness to make sure our kids are ready to thrive when they enter a public school system. And for moms trying to go to work or go to school themselves, we also know that this really impacts our economy and our workforce. We see it crystal clear during Covid-19 how much early education and child care impacts our economy.”

Early childhood advocates applaud any increase in access to early education, which many see as key to closing achievement gaps because about 90% of brain growth happens before kindergarten. Meanwhile, California, which has almost 3 million children under the age of 5, trails behind other states in terms of access, with only 37% enrolled in TK and the state’s subsidized preschool program.

“The research shows that when a young child goes to school — not day care — they are far more likely to graduate from high school and go on to college,” Biden said as he called for universal preschool for all 3- and 4-year-olds during a recent address to a joint session of Congress to roll out the American Families Plan.

The hit to child care

However, the latest push to expand TK to more 4-year-olds comes just as the early learning and care system has been hammered by the pandemic. Some preschool and care providers say expanding the program now may undermine the fragile child care sector by taking 4-year-olds out of child care centers and moving them into TK.

“It feels like an erosion of our child care centers that is on the way,” said Makinya Ward, administrator at Kids Konnect Preschool, which runs centers in San Mateo and Alameda counties. “The bottom line is that we are going to lose our 4-year-olds, and many enjoyed working with that age.”

Asking child care providers to switch to younger children, the 0-3 cohort, may be more complicated than it sounds. Because babies and toddlers require far more individualized attention and care than older children, it’s a big lift for providers to redesign their programs, some suggest.

“We are losing a big part of our business model,” said Christopher Maricle, executive director of California Head Start. “You need the 4-year-olds to make the numbers work. Zero to 3 is a very expensive gig.”

Opponents are also questioning whether the K-12 system is the ideal space for pre-K programs, arguing that it might be smarter to expand the state’s preschool programs instead. With its small class sizes and play-based curriculum, some argue, the preschool approach may be best suited to spark a love of learning.

Only affluent families will be able to afford to choose private preschool over TK, they argue, which may further widen the achievement gap, the learning divide between wealthy and disadvantaged students. Of course, this is true for all levels of education, from preschool to college.

“Only families with economic resources will be able to opt out of TK,” said Beatriz Leyva-Cutler, executive director of BAHIA Inc., which provides bilingual child care and education in Berkeley. “Is that equal? Does this provide equity to families of color? Give families options for the type of services that fit working families.”

“There are concerns that the people with elementary-level credentials are not trained to work with young children, and that class sizes will be too large,” said Deborah Stipek, a professor in the Stanford Graduate School of Education and an early education expert. “There are many who are very concerned that this will lead to pushing an academic curriculum that will involve developmentally inappropriate teaching, fail to attend to other important dimensions of development, especially social development, fail to provide young children opportunities to play, and not involve parents as partners, as is expected in early childhood programs.”

Some say TK teachers lack the expertise of preschool teachers, who may be better versed in the developmental needs of younger 4-year-olds, an age group in which social and emotional learning may be more critical than math or reading skills.

“Four-year-olds need consistency, attachment and nurturing. They are still very small,” said Kim Kruckel, executive director of the Child Care Law Center. “They need to be cared for by experts who understand that they need to play, take naps, laugh and be cared for. “

Quality may also be a sticking point. After all, TK did not get high marks in the “State of Preschool Yearbook,” an annual report on state-subsidized early learning, published by the National Institute for Early Education Research (NIEER), based at Rutgers University. While California’s State Preschool Program met six of the study’s 10 benchmarks of quality, the TK program only met three of them.

Class size and specialized teacher training were among the key concerns. Some experts say that raising the consistency and quality of the programs must go hand in hand with increasing access.

A blend of the best

“The ideal plan would allow California to take the best of its preschool and TK and combine them together into one program. It will take some time to build quality, but you have to bring everyone in as you build it,” said W. Steven Barnett, senior co-​director of NIEER. “Expansion can be done with a timeline that gets all teachers highly qualified and adequately paid, with a single continuous improvement system to ensure that all children get what they need. It would be wise to figure out how fast the program can expand without sacrificing quality.”

Innovative solutions may be the answer, Lozano of Early Edge California suggests. Some school districts, such as Los Angeles Unified and Oakland Unified, already offer expanded transitional kindergarten, allowing children who turn 5 after Dec. 2 to enroll. Others, like San Diego Unified, have California State Preschool Program and TK teachers working side by side in classrooms to leverage the best aspects of both educational styles to reach 4-year-olds.

Many early childhood advocates who support the TK expansion maintain that all the concerns can be addressed in the way the expansion is rolled out. For example, the AB 22 legislation now includes plans for wraparound care for children attending transitional kindergarten who need care after the school day, teacher-child ratios that allow for meaningful adult-child interactions and high-quality professional development. They also point out that parents will get to choose whether to stay in a Head Start or state preschool program or shift to TK, based on what’s most convenient for them.

“There’s politics and there are a lot of competing interests. This is a big change, and change is hard, but I think we need to think about the kids more,” said Lozano, who is a former pre-K teacher. “What we know about TK from the research is that it works, especially for the kids who need it most. This is an opportunity to make it happen. This is the time. We can find a way to make this work for everyone.”

Lozano notes that TK is already popular with parents and that some mothers actually try to plan their pregnancies so their children will likely be able to attend TK. And a new poll shows that 70% of Californians support publicly funded early learning programs.

Many early childhood experts believe that it is crucial to bring early childhood education to more children while there is national momentum building for the policies, even if there are some issues to be ironed out.

“There is merit to all of the concerns, but they can be addressed by making sure that TK teachers are well prepared to teach young children using developmentally appropriate approaches, that class sizes are kept relatively small, and the administrators are given training in early childhood education,” Stipek said. “What we in the field need to do is press for policies and practices that will make this work for young children and their families.”