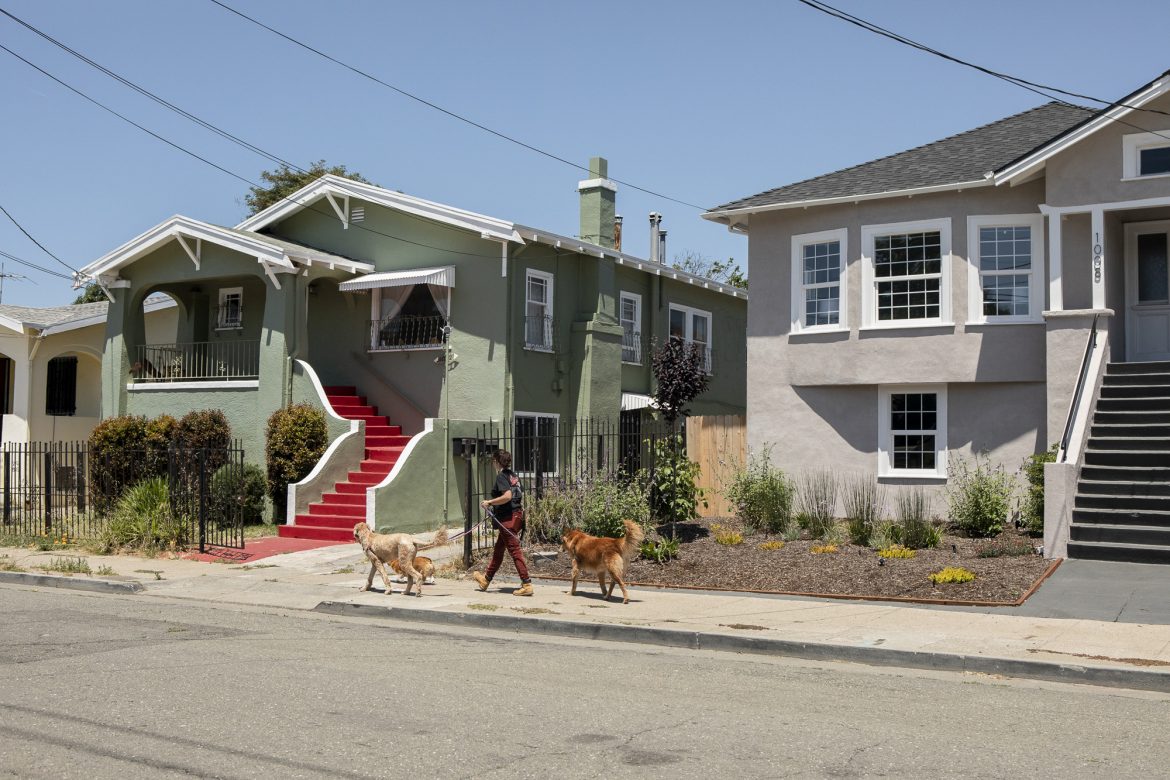 A residential neighborhood of Emeryville, CA on July 3, 2019. Jason Elliott, Gov. Gavin Newsom's adviser on housing and homelessness, said that while the state can build housing for homeless people and the very poor, the private sector is essential to easing the statewide housing shortage. (Photo by Anne Wernikoff, CalMatters)

Gov. Gavin Newsom has repeatedly made housing affordability a top priority of his administration. But getting a good read on his thinking can be difficult.

During a panel discussion hosted by Capitol Weekly on Wednesday, Jason Elliott, Newsom’s top advisor on housing and homelessness, provided a glimpse. The big takeaway: California is millions of housing units short, and cities hold the key.

“We have the wrong reflex around housing in the state. We start with no. No, we shouldn’t build there,” Elliott said. “Let’s start with yes, unless there’s a reason not to build.”

Getting cities and counties to say yes to housing is a long battle in California. To move the needle, Elliott pitched the statewide Housing Accountability Unit, which Newsom proposed in his January budget. With a proposed budget of $4.3 million, the unit would hold cities’ feet to the fire when they break existing housing law, and help them take advantage of laws already in place that streamline regulations and permits.

One example: a 2013 law designed to increase infill development in “green zones,” which Elliott said could potentially allow for millions of housing units to be built.

So what of the slew of housing bills at the state Capitol? Some policy bills face a key deadline next week, but Elliott declined to comment on specific bills, including Senate Bill 9, which would allow homeowners to put a duplex on single-family lots or split them. He said the governor would generally support any move to change the default to yes on more housing.

He also emphasized that just as important as passing new legislation is implementing laws already on the books. “A governor’s signature does not build new units,” he said.

Elliott said he was watching “with glee” the Biden administration’s $5 billion proposal as part of his infrastructure plan to encourage local governments to end exclusionary zoning and other practices. “We’re heading down the same path here,” Elliott said.

Elliott sidestepped another question, about whether the administration would seek to extend the statewide eviction moratorium, which is set to end June 30, as the state doubles its rent relief funds with an additional $2.6 billion from the federal government. The state has struggled to get tenants and landlords to enroll in existing benefits. As a result, the state has announced it will simplify the process to get more money out the door faster.

“A moratorium until the end of time that doesn’t provide a sufficient benefit to get people to enroll,” Elliott said, trailing off. “We need people to enroll. That’s goal number one.”

Elliott said the almost-certain recall facing Newsom later this year isn’t affecting his positions on housing, either, pointing to the governor’s 2020 State of the State speech, where housing and homelessness took center stage. He highlighted $12 billion in the governor’s budget proposal for housing and homelessness and $1.75 billion to kick-start building on more than 6,000 of backlogged affordable housing units.

Elliott said that while the state can build housing for people experiencing homelessness and the very poor, the private sector is essential to easing the housing shortage.

“It’s not really realistic to assume we’re going to subsidize our way out of this,” Elliott said. “Which is why we need the private sector to do what it does, which is to build housing.”

Elliott was joined on the virtual panel, moderated by CalMatters, by Jennifer Svec, legislative advocate for the California Association of Realtors; Assemblymember Buffy Wicks, a Democrat from the East Bay; and Adam Fowler, research director at Beacon Economics, all of whom agreed that a supply shortage was largely responsible for ballooning home prices. In the Bay Area, the median home price soared to an all-time high of $1.3 million and the statewide median home price broke $800,000 last month.

Some other highlights from the discussion:

On home prices, Svec refrained from calling California’s housing market a “bubble.” She expects the housing market will remain much more stable this time around than after the 2008 foreclosure crisis, and doesn’t expect prices to drop anytime soon.

The State Building and Construction Trades Council has pushed to include a requirement in housing bills that would force the new units to be built with union labor. Many affordable housing developers argue there just isn’t the available workforce so that mandate would only increase the cost of construction.

In response, Fowler agreed that California, like the rest of the country, faces a severe shortage of labor, “union or otherwise.” But with so many other cost drivers — such as skyrocketing lumber prices — wages aren’t the problem.

“You can’t bid high enough on labor to get the folks you need so it’s kind of a moot point for the foreseeable future,” he said. “Workforce development for those skilled trades is going to be so essential.”

On the eviction moratorium, Wicks said she was working closely with Assemblymember David Chiu’s office to make sure tenants are protected but landlords receive missed back rent.