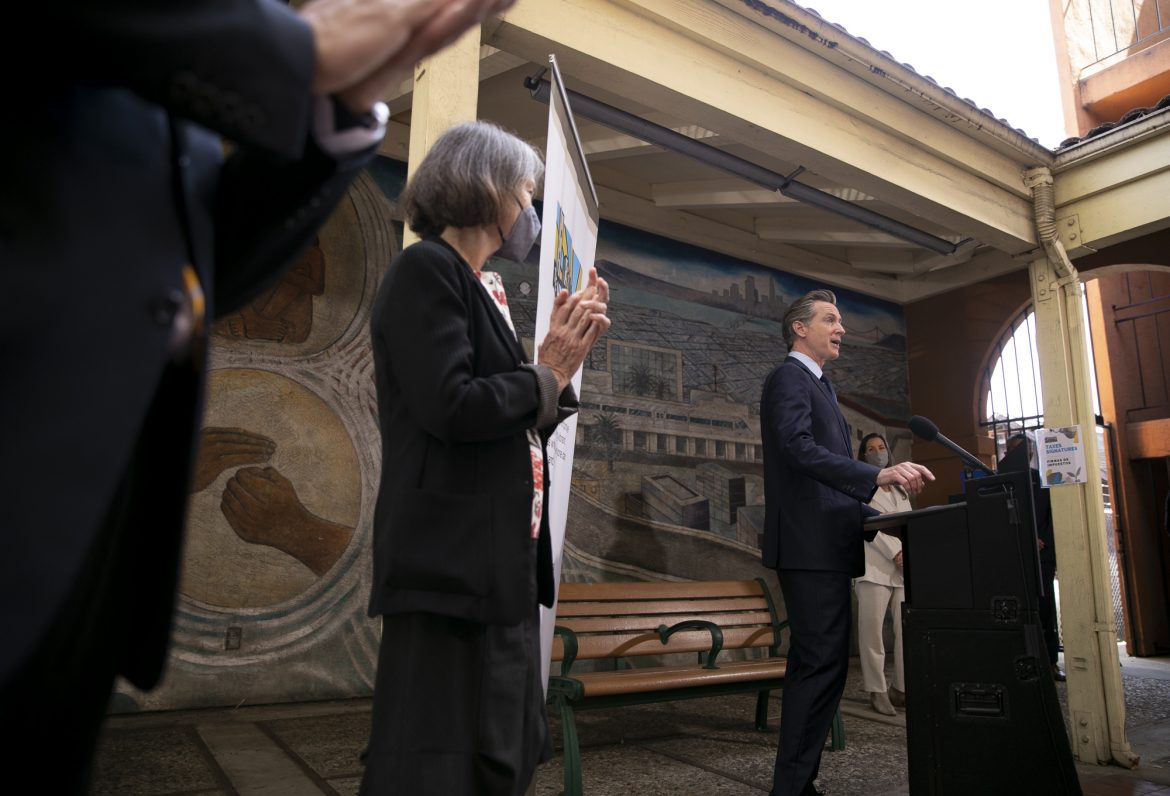 At the start of the pandemic a year ago, today’s news would have seemed unimaginable: The Golden State is sitting on a budget surplus so big, it’s considering giving $600 stimulus checks to California households making up to $75,000, paying off back rent of tenants affected by COVID and helping millions of residents catch up on their water and electricity bills.

“California is not just back, California is roaring back,” Gov. Gavin Newsom said today in announcing a whopping $75.7 billion surplus that’s enabling him to propose what he claims is the largest state tax rebate in American history.

Facing a line of Republican challengers in an upcoming recall, the first-term Democratic governor seized the opportunity to showcase California’s budgetary good fortunes by kicking off a statewide tour ahead of a formal budget update Friday. Billed as a $100 billion California comeback plan, the Newsom administration is able to leverage $26 billion in federal relief funds as well as a windfall from California’s richest residents who have seen their wealth soar during the pandemic, even as the virus has wreaked havoc on the lives and livelihoods of millions of low-wage Californians.

At a press conference in the Oakland neighborhood of Fruitvale, Newsom announced an $11.9 billion expansion of his Golden State Stimulus program to send one-time $600 payments to Californians, $5.2 billion to help low-income renters stay housed, $2 billion to help Californians pay overdue water and utility bills, and $1 billion in college grants to help workers whose jobs have been decimated by the pandemic find better-paying work.

The rest of the relief proposal will address “five of the state’s most stubborn challenges,” according to his office. Lawmakers have until June 15 to negotiate a finalized budget.

“I’m just very proud that we are a state that reflects the type of values that recognizes that so many people were disproportionately hurt by this pandemic,” said Senator Nancy Skinner, an Oakland Democrat who leads the Senate budget committee.

Her counterpart in the Assembly, San Francisco Democrat Phil Ting, piled on: “This is an opportunity to build the California, not of next year, but really, of the next 100 years.”

For Newsom, who is facing an all-but-certain recall election later this year, it’s a politically fortuitous time to have tens of billions of dollars worth of goodies to sprinkle around the state. That’s particularly true of the stimulus payments, which, if enacted by the Legislature, would likely wind up in taxpayers’ mailboxes in the fall —  around the same time as the recall ballots.

Newsom’s relief plan comes as new jobs data paints a mixed picture of California’s economic recovery. Despite a pick up in business reopening and hiring, the state still had 1.5 million fewer jobs in March than in February 2020 — with the lowest-paying jobs hit hardest — according to a California Budget and Policy Center analysis. High unemployment rates continue to disproportionately affect Black and Latino Californians, especially women.

Newsom continued to affirm his plans to reopen California on June 15 should the state continue its vaccination trend. California’s seven-day coronavirus positivity rate has dropped below 1%, the lowest since the start of the pandemic, Newsom announced. He said nearly 62% of all Californians over 16 have received at least one vaccine dose.

Newsom is proposing to send $600 tax rebates to California households who earn up to $75,000 in adjusted gross income per year. An additional $500 will go to families with kids or other dependents, as well as undocumented families. Newsom said that 78% of California tax filers would ultimately receive a stimulus payment.

It’s a significant expansion of the $3.8 billion Golden State Stimulus program that Newsom authorized in February, which is sending one-time $600 payments to Californians who earn less than $30,000 per year, plus an extra $600 for undocumented taxpayers. It also authorized $600 grants for CalWORKS families and elderly, blind and disabled people who receive Supplemental Security Income or the state’s Cash Assistance Program for Immigrants.

Millions of Californians have already benefited from the first round of payments. Of the 5.7 million people the state estimates are eligible, as of today the state had received tax returns from about 3.3 million eligible people, including nearly 470,000 undocumented workers who file taxes. The state tax agency has sent out 2.5 million payments worth $1.6 billion, with more pending.

“The middle class have been hurt hard by this pandemic. They’ve been squeezed across the spectrum,” said Newsom, who held his press conference from The Unity Council, a nonprofit that assists workers and families in Oakland. “Women, notably, have been disproportionately impacted in this pandemic and that’s why we are…providing additional $500 to support families with children.”

People who received the first round of payments are not eligible for the second, according to a fact sheet that the governor’s office handed out at the press conference. It’s unclear how soon the payments could be sent out.

Advocates for low-income people and immigrants have pointed out problems with sending money out through the tax system. About half of undocumented immigrants don’t file taxes, according to estimates from the non-partisan Legislative Analyst’s Office. Plus, millions of Californians aren’t required to file taxes because they earn too little, so they don’t.

In the coming weeks, a coalition of safety net advocates will push for much bigger relief checks for undocumented immigrants, especially those who don’t file taxes, in this expanded Golden State Stimulus program, said Anna Hasselblad, public policy director of United Ways of California. Undocumented immigrants have been left out of federal stimulus checks and unemployment benefits.

“This is not a charity thing. This is a solidarity with a community that has been excluded,” Hasselblad said.

The state’s eviction moratorium expires June 30, raising the stakes for Newsom’s new rent relief proposal. Half of the $5.2 billion he announced today was already allocated to rent relief in January, and has been slowly rolling out to landlords and tenants as part of the COVID-19 Tenant Relief Act. The second half of funds will also come from the federal government, according to the state Department of Finance.

The first set of funds came with a series of stipulations laid out by state law, including that the money would cover 80% of back rent, and landlords would forgive the remaining 20%. If the landlord opted out of the program, tenants would then be eligible for only a quarter of back rent.

In previous reporting, CalMatters found the program left out many renters who took out loans through credit cards, friends or other lenders. The funds were also allocated by raw population size, rather than the population of low-income renters as advocates had hoped, leaving cities with a high proportion of renters like Los Angeles with insufficient funds.

Who will qualify for the additional $2.6 billion in rent relief and how they’ll get it under Newsom’s proposal is still up in the air. Newsom suggested the new plan will do away with the 80% deal, opting instead to reimburse tenants for 100% of the back rent they owe.

Newsom’s proposal to dedicate $2 billion to help pay back utility bills follows CalMatters’ reporting that at least 1.6 million households had water debt that totalled $1 billion and state estimates that Californians owe another $1 billion in late gas and electricity payments.

For the record, this story has been updated to clarify that the $75,000 income threshold is per household, not tax filer, according to the Department of Finance.