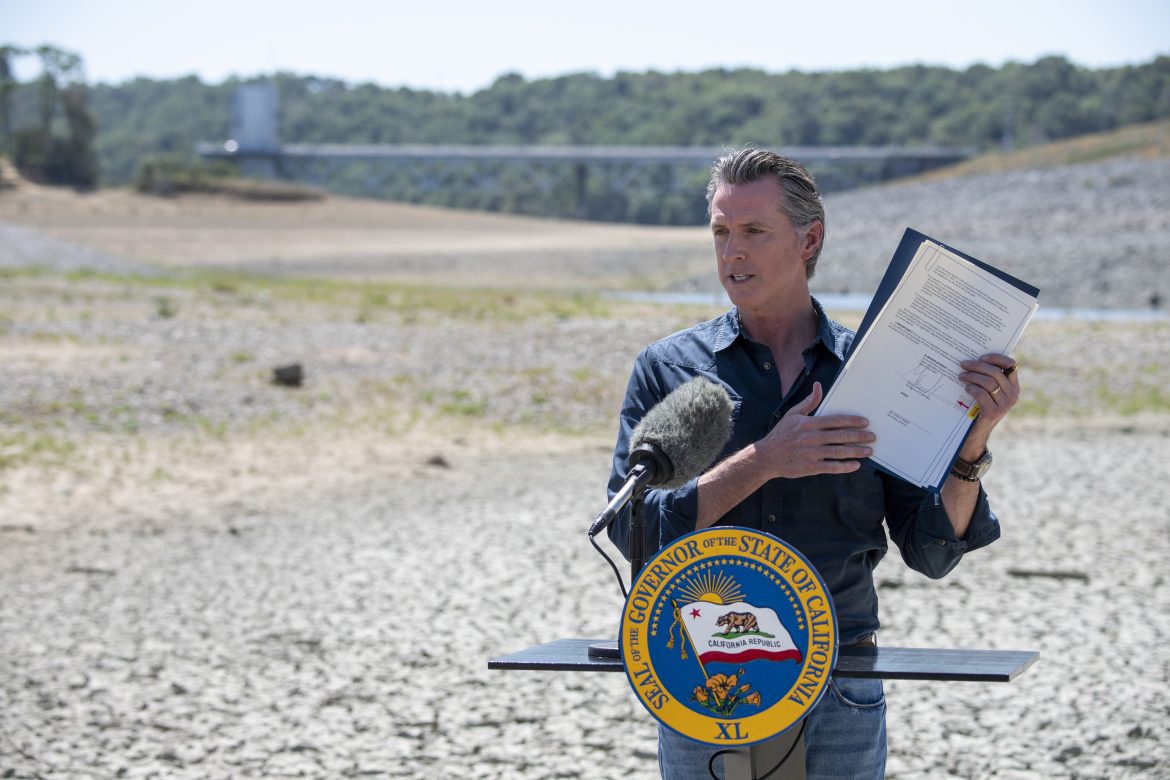 California Governor Gavin Newsom speaks during a conference was held on the dry Lake Mendocino Lakebed, in Mendocino County, Calif., on April 21, 2021. Newsom proclaimed a regional drought emergency for the Russian River watershed in Sonoma and Mendocino counties, where reservoirs are at record lows ecosystems if the dry conditions extend into a third year. (Ken James/California Department of Water Resources) FOR EDITORIAL USE ONLY

The proposed allocation would be spent over four years and includes $1.3 billion for improved drinking and wastewater infrastructure, $60 million to help the agriculture industry reduce its water use and greenhouse gas emissions and $200 million for habitat restoration.

Newsom, announcing the investment at the San Luis Reservoir in Merced County, said the state has lost some 500,000 acre-feet of runoff over the last three weeks compared to what state water officials expected.

That total is equivalent to the water usage by 1 million households for a year.

“What we’ve experienced is what some had predicted but no one had necessarily experienced,” Newsom said. “And that was snow melt so acute that it didn’t actually run off into reservoirs or rivers, but it actually seeped into the dry, parched ground underneath, much of it evaporating completely.”

Newsom’s announcement of the water infrastructure funding, part of the governor’s annual May budget proposal revision, came on the same day that he added 39 counties to the state’s emergency drought proclamation, including four in the Bay Area.

Alameda, Contra Costa, Napa and Solano counties were added to the proclamation.

“It’s self-evident to many folks that the hots are getting hotter in the state, the dries are getting a lot drier,” Newsom said. “We have to recognize that we live in a world that we were not designed to live in. We have a conveyance system, a water system, that was designed to a world that no longer exists.”

Newsom is expected to tease out other portions of his May budget proposal revision this week before unveiling the full proposal on Friday. Newsom and the state legislature will then have until June 15 to approve the budget before the new fiscal year begins on July 1.