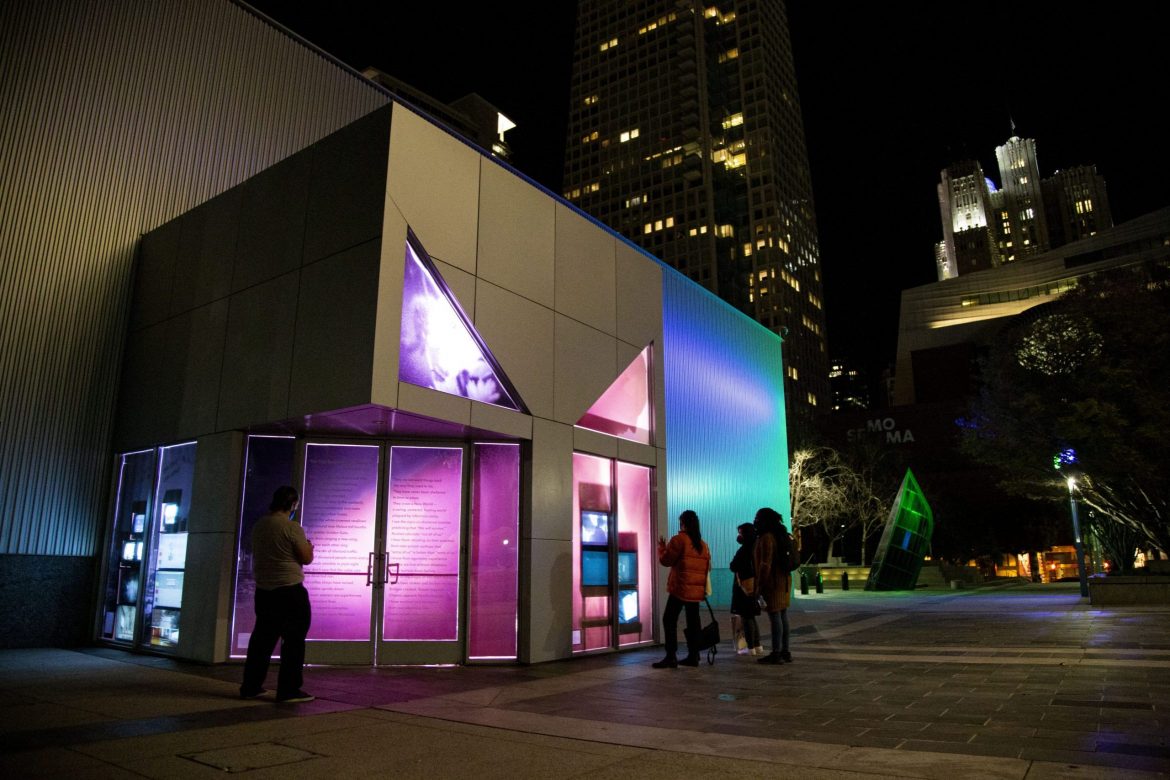 “Mourning Is an Act of Love” is an installation currently on display at the Yerba Buena Center for the Arts for the SF Urban Film Fest.

“The exhibit itself is kind of an outgrowth of the film programs we put together for the online festival,” says lead curator and documentary filmmaker Susannah Smith.

The festival Smith is referring to is SF Urban’s Film Fest annual signature event, which brings together storytelling, history, urban planning, community discussion and more, all in one place.

The installation is a mix of photography, video, glass painting, new media, poetry and large-scale projections. It can be found on the south and east facing windows and walls of YBCA adjacent to Yerba Buena Gardens.

These artists, each talented in their own right, were chosen based upon their ability and history of creating community-centered work that looks deeply at love and grief. The installation is free, is exclusively outdoors and can be viewed at all hours.

“I really wanted to talk about the idea of what a monument is and choose artists that were interacting with that,” Smith says.

When working with the artists, Smith wanted to make sure each piece emulated the viewpoint of someone actually visiting a monument or memorial. A person viewing the installation will notice that much of the photography is shot from down below. The installation seeks to bring up the key question: Who gets (the privilege of being) memorialized?

One artist is Tatyana Fazlalizadeh, whose visual art seeks to address the oppressive experiences of marginalized people. Fazlalizadeh’s piece features the portraits of Breonna Taylor and Atatiana Jefferson, two young Black women who were killed by police officers in their own homes.

“I think that’s the first time she’s done any portraits of people that were not currently alive,” Smith says.

Baltimore-based artist Ada Pinkston’s piece features herself in her film “LandMarked” (2018), which showcases a series of public performances on empty plinth sites where Confederate monuments previously stood in Baltimore. “LandMarked” seeks to consider the Black women who are rarely monumentalized.

Melinda James created two pieces for this installation — a four-channel video installation, (“Know That I’ve Enjoyed Sunshine”) and a large-scale video projection (“Between One World and the Next”) that explores the question, — “How do we monumentalize care?”

Michael Warr’s poem “The City Speaks of This Moment” was originally a commission by Fay Darmawi, executive director or SF Urban Film Fest. “Then we decided it was so good … I was like, ‘Oh, this should be on the building,’” Smith says.

Smith’s connection to this installation is deeply personal. “The truth is that I have had a lot of death, personally within the past seven years,” Smith says. She goes on to say “when I’m crying for people and feeling that sadness, it’s actually because of how much I loved them.”

Smith emphasizes that we (our nation) have not reckoned with our histories in thinking about our cycle of colonialism and violence against Black and Brown bodies.

“We just keep having this pain go on and on, because we refuse to deal with it, right?”, Smith says.

One powerful panel that SF Urban Film Fest hosted that Smith believes has guided this installation was entitled “How We Mourn, Where We Remember.” It featured four of the current artists and was moderated by Bryan C. Lee, Jr., founder/design director of Colloqate Design, a New Orleans-based multidisciplinary Architecture + Design Justice practice.

The conversation discussed memory as a gateway to potential. The panel revolved around the conversation that “you can’t get further and you can’t move forward, if you haven’t reckoned with [the past].” You can watch a recording of the panel here: https://www.youtube.com/watch?v=quIpjni-vlI.

“Mourning Is an Act of Love” is centered on the view that collective mourning and acknowledgement is crucial in this moment in time.

* The SF Urban Film Fest is currently on a two-year residency with the Yerba Buena Center for the Arts. “Mourning Is an Act of Love” is on display through May 7. To learn more about SF Urban Film Fest and stay updated with their programming, visit their website at https://sfurbanfilmfest.com/2021/.