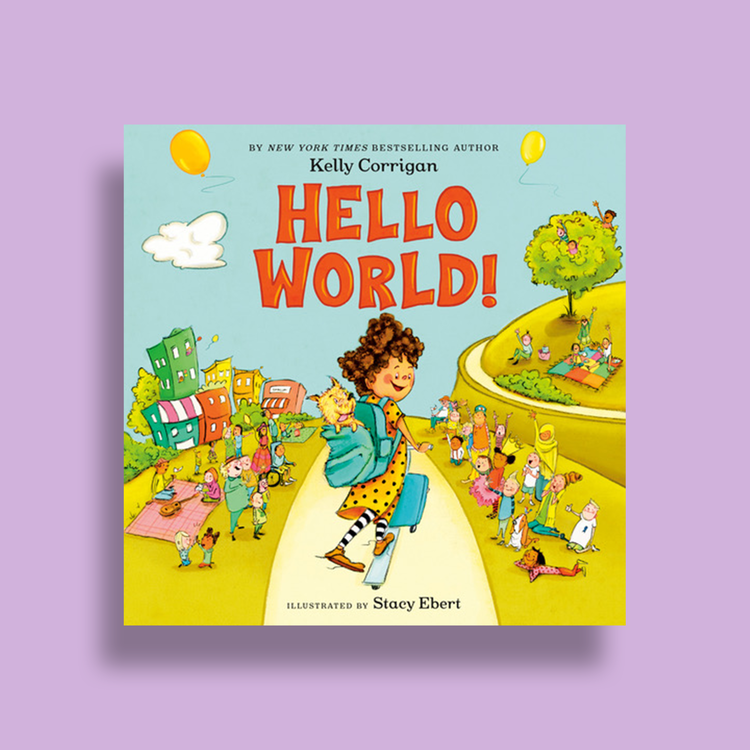 Growing up, it wasn’t easy to get my brothers or me out of bed. My mother tired of the rigamarole early on (it was a fairly hopeless business) and by high school, the job of getting us to the bus stop on time was left to my dad. His method was to open a window and holler Hello World! to which, The World would respond, Hello Georgie! His imaginary back and forth continued:

I’m comin’ out there to getcha, World!

I’m waitin’ for ya, Georgie!

Then he’d come to us, room by room, and tell us a great day was here and slowly feet would hit floor.

A world that’s waiting for you, that knows your name? That’s a good place, a place where you are welcomed and anticipated, where you can jump in to the mix and make things happen.

I have believed these basic ideas since before I could name them.

The other life-changing gift of being George Corrigan’s daughter was watching him discover people. Tara, the girl at the deli who made his sandwich, Candy, his dry cleaner, Pete at the gas station, Jimmy on train ride. He learned their names. He knew things about them. They looked forward to seeing him. He intersected with hundreds of these people in the flow of his day. And it made his days different than other peoples.

This world he lived in was spectacular, like a party. I realized much later that he made that world, every day, by taking an interest. He asked questions. He might ask Tara about the college on her sweatshirt and find out her older brother goes to Penn State and that might lead to finding out that she wants to go to somewhere small like Swathmore College and maybe he’d find out that she loves reading so she wants to be an English major and all that would be very interesting to him, memorable, a starting place for next time. He might find out Jimmy on the train went to Prague last year by asking where he got that great hat. He knew Candy started the Dry Cleaning place with her auntie and that last year was a tough for business but things were looking up now and she thought it was because more women were working and so more clothes needed professional cleaning.

There is research about the value of what is known as “weak ties” – the peripheral connections of neighbors and shop owners and fellow commuters. But I have my own proof. My father loved and was loved in equal measure, every day, right in front of my eyes and in so doing, he created a world any one of us would love to live in.

Hello World is a distillation of what I learned at his side and is officially on sale as of this morning. XO

Special thanks to Stacy Ebert for the clever illustrations and Margaret Anastas for the joyful guidance.

Read more about the book HERE