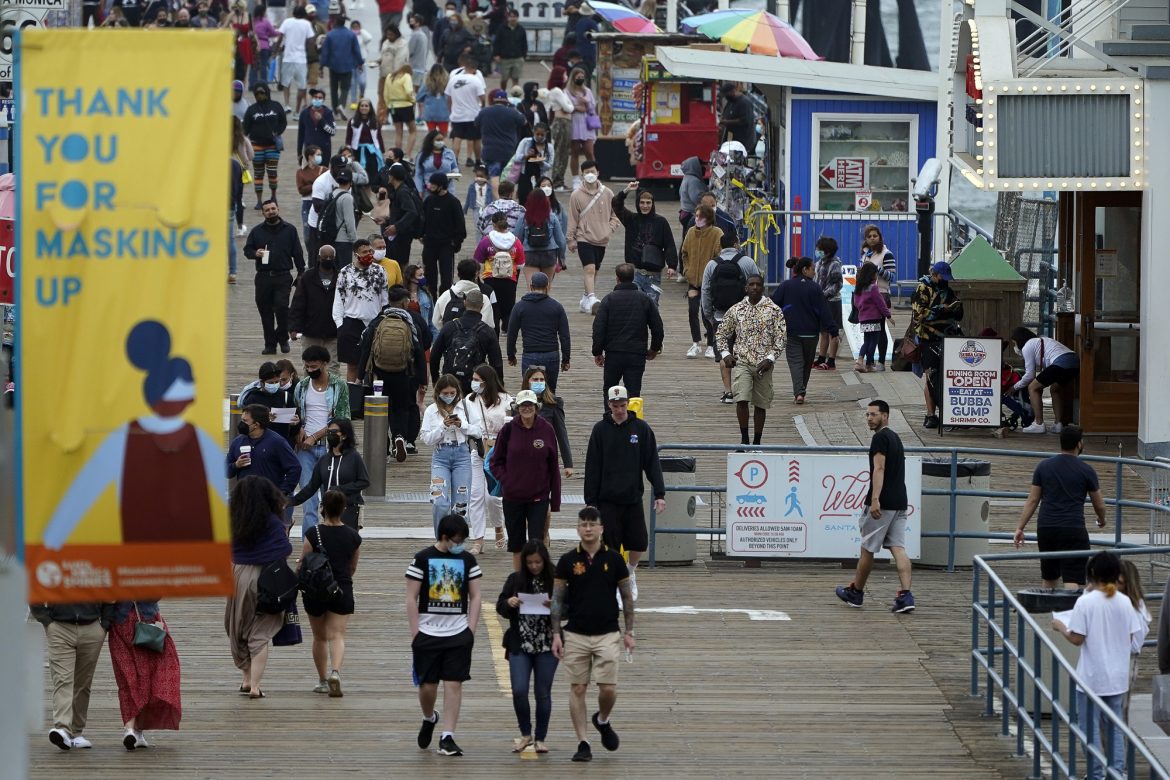 People with and without masks walk along Santa Monica Pier on May 13, 2021. In Los Angeles County, about 45% of the eligible population — or a little over a third of the entire county population — was fully vaccinated as of last week. Photo by Marcio Jose Sanchez, AP Photo

Five months after COVID-19 vaccinations began, only two California counties are close to reaching “herd immunity” while most trail far behind with less than half of their eligible population vaccinated.

Two remote Sierra Nevada counties — 180 miles apart along Highway 395 — illustrate California’s extremes: Lassen County is at the bottom with only 21% of residents 16 and older fully vaccinated, while Alpine has a rate more than three times higher, at 69%.

Alpine, California’s least populous county, is tied for the top with Marin, the state’s most affluent.

Some experts anticipate that the Bay Area will be the first region in the state to reach herd immunity, or as experts more commonly refer to it, “community immunity.” Of the 13 counties where at least half of eligible residents have been fully vaccinated, eight are in the Bay Area.

Of the 13 counties where at least half of eligible residents have been fully vaccinated, eight are in the Bay Area.

Public health officials have said anywhere from 70% to 85% of the total population — not just eligible people — needs to be fully vaccinated to beat COVID-19 or at least keep its transmission low enough.

But local health departments focus on eligible populations instead because vaccines have not been approved for children under 12. Many have goals of vaccinating 75% to 80% of eligible residents.

Community or herd immunity is important to protect those who cannot get vaccinated and to return to normal activities with little or no restrictions, such as on June 15, when California lifts its indoor mask order for vaccinated people.

Dr. John Swartzberg, an infectious disease specialist at UC Berkeley, said the concept of herd immunity can’t really apply to counties or cities alone because they aren’t insulated from one another.

“I think a better way to look at it is: as we approach this theoretical number, things will get better, even one percent of increase in vaccinations translates into thousands of fewer infections,” he said.

Just under 50% of Californians 16 and older have been fully vaccinated and another 15% have received one dose, according to state data. The numbers are promising, experts say, but progress can vary greatly by county. In many communities, demand for the vaccine has subsided so public health officials are trying to get creative to persuade remaining residents to get their shots.

Why such disparities among counties?

The data raises a lot of questions: Why are more people vaccinated in the Bay Area? Why does one remote, mountain-area county, Alpine, have three times more of its population vaccinated than another, Lassen? And why are some Central Valley counties lagging farther behind than others?

Public health experts are uncertain why there are such big disparities between specific California counties because a mishmash of factors are at play. Reasons why people aren’t vaccinated include lack of internet access or mobility, political leanings, language barriers, distrust of vaccines and lack of time, among others.

From 70% to 85% of the population needs to be fully vaccinated to beat COVID-19 or at least keep its transmission low.

Link to CalMatters’ interactive graph for all 58 California counties HERE

The Bay Area has consistently responded quicker than most of the state throughout the pandemic. It was the first region to lock down in the entire country, for example.

Swartzberg said there is a unique trust between local public health experts, elected officials and the community that stems from when the Bay Area was the epicenter of AIDS in the 1980s. “The Bay Area struggled for a few years but public health and elected officials figured out how to work hand in glove with the community, and I think that’s had a halo effect extending to now,” he said.

In counties with large agricultural communities, Swartzberg thinks people may be facing logistical barriers, like taking time off work. Also, vaccines, like face masks and much of the pandemic, have been politicized.

The Central Valley has a wide range of vaccination rates; Kings County is at 25% fully vaccinated and Fresno is closer to 40%, according to the state data.

In Kern County, where 33% of people 16 and over are fully vaccinated, fear of side effects and lack of transportation continue to be significant barriers, said Michelle Corson, a spokesperson for the Kern County Public Health Department.

“Also, many members of our community that we talk to are interested in getting vaccinated, but they just don’t see it as something that needs to be done with urgency,” she said.

Kern went from receiving about 30,000 doses per week in March, to more recently needing under 10,000 as demand slows.

Big gap between Alpine and Lassen

In counties with small populations, a few vaccinations can make a big difference in their rates.

Dr. Rick Johnson, Alpine County’s public health officer, said he thinks the key to his county’s success was in keeping vaccine registration simple and personal. With a population of just over 1,100 permanent residents, officials there opted for a call-in appointment system.

Johnson and his program manager answered the line and talked to people directly.

“We didn’t use a text system or the MyTurn system,” he said. “They called, and people knew who they were going to talk to.”

Alpine County, located between Yosemite National Park and Lake Tahoe near the border with Nevada, has been vaccinating all adults since Feb. 24, ahead of the state’s timeline. Also, compared to other rural counties, Alpine tends to vote more blue than its neighbors, which Johnson believes is benefitting their vaccination efforts.

About 43% of Alpine’s registered voters are Democrats. In the last election, almost twice as many people voted for Joe Biden than Donald Trump.

“There are typical attitudes that come with a political stance,” Johnson said. An anti-vaccine sentiment is not prominent in his county, he said.

Johnson said Alpine’s numbers are likely even better than the state data show: His county has a large Washoe tribe community served by clinics operated by the federal Indian Health Service. State numbers do not include vaccinations administered by the agency or by the Veterans Health Administration, Department of Defense and Federal Bureau of Prisons.

“There are typical attitudes that come with a political stance.”

In Lassen County, which is a heavily forested area north of Tahoe, health officials have little confidence in the state’s numbers. While state data shows that 21% of residents 16 and older are fully immunized, Barbara Longo, the county’s health and social services director, said by the county’s estimates, it’s closer to 56%.

Longo said the discrepancy between state and county data is likely due to several factors that make Lassen, which has a population of about 27,500 and three prisons, unique. Her population numbers to calculate the vaccination rate don’t include state prison inmates because they don’t mingle with others, while state population numbers do.

Also, many community members have told Longo and her team that they received their vaccines in Nevada while shopping in Reno. A spokesperson for the Nevada Department of Health and Human Services said the agency does not share vaccination data with other states.

“We continue to explain our data to the state, they hear us, but it doesn’t change, so I’ve given up,” Longo said.

One reason for the low vaccination rate may be prison employees. A recent CalMatters report shows that in the vast majority of prisons, less than half of employees are fully vaccinated.

Lassen has a large Republican base — about three times more registered Republicans than Democrats. Former President Trump had overwhelming support in the election there. Longo, however, doesn’t think political views are having a significant influence on her county’s vaccination rate.

Still, Longo thinks the most challenging part is yet to come — convincing parents to vaccinate their 12-15 year olds. “We’ve already had parents yell at us,” she said.

For the state to continue with its low case rate and hospitalizations, health experts say it’s important that all counties increase their vaccination rate, especially as the state’s June 15 reopening date approaches.

Shira Shafir, an epidemiology professor at UCLA, said community immunity is not a simple on-and-off switch. There likely are pockets of low vaccination rates even in counties with high rates, and that means unvaccinated people are working or living near one another. Also, many people commute to another county because of high housing costs.

“We can’t just look at one county and say ‘Hey, this county got to 80%. But (the county next door) is at 60%.’ That means neither county is where it needs to be,” Shafir said.

“Really, what’s important is related to the probability that someone infected comes in contact with someone who is susceptible,” she said.

Health officials are hopeful that the next couple of weeks will see a bump in fully vaccinated residents because many weren’t eligible until April 15, when the state eliminated any remaining eligibility criteria for anyone 16 and older. Those people are now just getting a second dose. As of last week, Pfizer’s vaccine is also available for teens 12 to 15.

In the state’s most populous county, Los Angeles, about 45% of the eligible population was fully vaccinated as of last week. The county administers about 400,000 doses each week, so if these numbers hold, about 80% of Angelenos 16 and older could be vaccinated by the end of July, public health director Barbara Ferrer said.

State officials have not said what rate California must reach to attain immunity.

“The more who are eligible for a vaccine, the better chance we have to reach that critical number, whether it be 70% or 75%,” said Dr. Mark Ghaly, the state’s health secretary.

CalMatters COVID-19 coverage, translation and distribution is supported by generous grants from the Blue Shield of California Foundation, the Penner Family Foundation and the California Health Care Foundation.