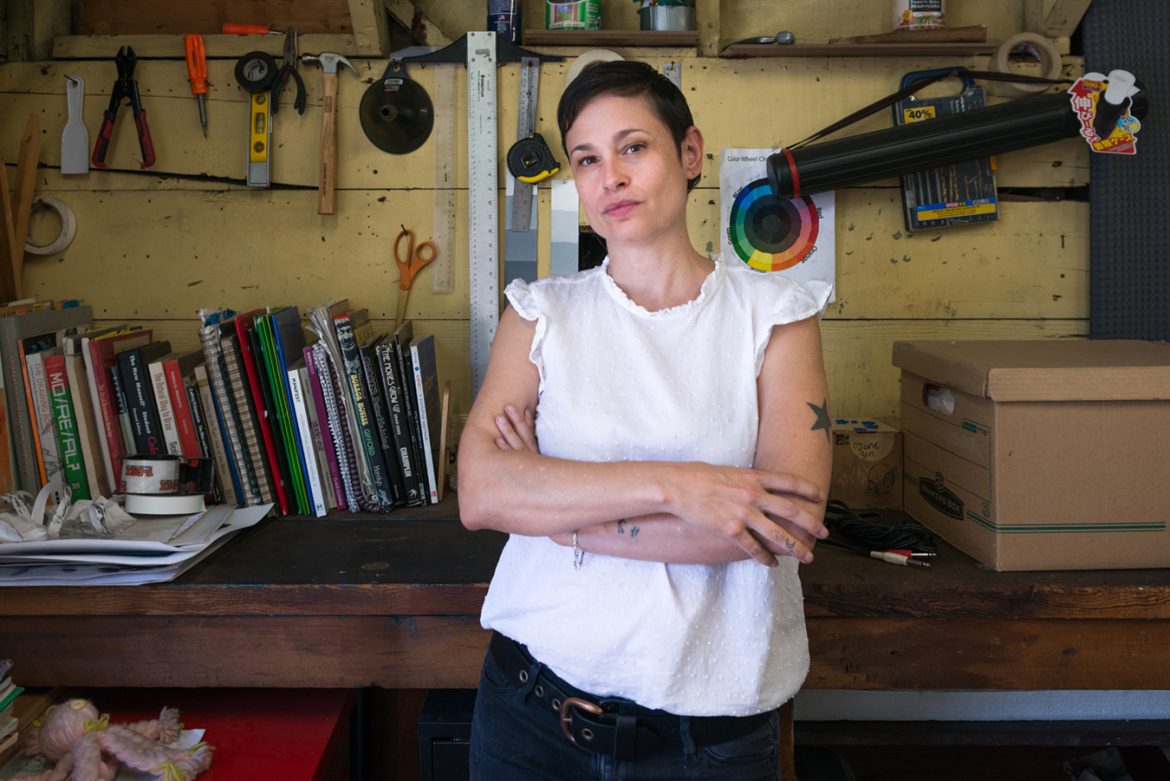 Pamela Valfer, in her home art studio in Pasadena, California. She was tested three times for covid and received a statement saying she might be responsible to pay $125 per test despite a ban on out-of-pocket costs. (Heidi de Mrco/KHN)

Pamela Valfer needed multiple covid tests after repeatedly visiting the hospital last fall to see her mother, who was being treated for cancer. Beds there were filling with covid patients. Valfer heard the tests would be free.

So, she was surprised when the testing company billed her insurer $250 for each swab. She feared she might receive a bill herself. And that amount is toward the low end of what some hospitals and doctors have collected.

Hospitals are charging up to $650 for a simple, molecular covid test that costs $50 or less to run, according to Medicare claims analyzed for KHN by Hospital Pricing Specialists (HPS). Charges by large health systems range from $20 to $1,419 per test, a new national survey by KFF shows. And some free-standing emergency rooms are charging more than $1,000 per test.

Authorities were saying “get tested, no one’s going to be charged, and it turns out that’s not true,” said Valfer, a professor of visual arts who lives in Pasadena, California. “Now on the back end it’s being passed onto the consumer” through high charges to insurers, she said. The insurance company passes on its higher costs to consumers in higher premiums.

As the pandemic enters its second year, no procedure has been more frequent than tests for the virus causing it. Gargantuan volume — 400 million tests and counting, for one type — combined with loose rules on prices have made the service a bonanza for hospitals and clinics, new data shows.

Lab companies have been booking record profits by charging $100 per test. Even in-network prices negotiated and paid by insurance companies often run much more than that and, according to one measure, have been rising on average in recent months.

Insurers and other payers “have no bargaining power in this game” because there is no price cap in some situations, said Ge Bai, an associate professor at Johns Hopkins Bloomberg School of Public Health who has studied test economics. When charges run far beyond the cost of the tests “it’s predatory,” she said. “It’s price gouging.”

The data shows that covid tests continue to generate high charges from hospitals and clinics despite alarms raised by insurers, anecdotal reports of high prices and pushback from state regulators.

The listed charge for a basic PCR covid test at Cedars-Sinai Medical Center in Los Angeles is $480. NewYork-Presbyterian Hospital lists $440 as the gross charge as well as the cash price. Those amounts are far above the $159 national average for the diagnostic test, which predominated during the first year of the pandemic, at more than 3,000 hospitals checked by HPS.

That’s the amount billed to insurance companies, not what patients pay, Cedars spokesperson Cara Martinez said in an email.

“Patients themselves do not face any costs” for the tests, she said. “The amounts we charge [insurers] for medical care are set to cover our operating costs,” capital needs and other items, she said.

Likewise at NewYork-Presbyterian, charges not covered by insurance “are not passed along to patients,” the hospital said.

Many hospitals and labs follow the Medicare reimbursement rate, $100 for results within two days from high-volume tests. But there are outliers. Insurers oftentimes negotiate lower prices within their networks, although not for labs and testing options outside their purview.

Billing by hospitals and clinics from outside insurance company networks can be especially lucrative because the government requires insurers to pay their posted covid-test price with no limit. Regulation for out-of-network vaccine charges, by contrast, is stricter. Charges for vaccines must be “reasonable,” according to federal regulations, with relatively low Medicare prices as a possible guideline.

“There’s a problem with the federal law” on test prices, said Sabrina Corlette, co-director of the Center on Health Insurance Reforms at Georgetown University. “The CARES Act requires insurers to pay the full billed charge to the provider. Unless they’ve negotiated, their hands are tied.”

But even in-network payments can be highly profitable.

Optim Medical Center in Tattnall, Georgia, part of a chain of orthopedic practices and medical centers, collects $308 per covid test from two insurers, its price list shows. Yale New Haven Hospital collects $182 from one insurer and $173 from another.

“We didn’t negotiate” specifically on covid tests, he said. “We’re not trying to take advantage of a crisis here.”

Officials from Optim Medical Center did not respond to queries from KHN.

Castlight Health, which provides benefits and health care guidance to more than 60 Fortune 500 companies, analyzed for KHN the costs of 1.1 million covid tests billed to insurers from March 2020 through this February. The analysis found an average charge of $90, with less than 1% of bills passing any cost along to the patient. Since last March, the average cost has gone up from $63 to as high as $97 per test in December before declining to $89 in February, the most recent results available.

In some cases, hospitals and clinics have supplemented revenue from covid tests with extra charges that go far beyond those for a simple swab.

Warren Goldstein was surprised when Austin Emergency Center, in Texas, charged him and his wife $494 upfront for two covid tests. He was shocked when the center billed insurance $1,978 for his test, which he expected would cost $100. His insurer paid $325 for “emergency services” for him, even though there was no emergency.

“It seemed like highway robbery,” said Goldstein, a New York professor who was visiting his daughter and grandchild in Texas at the time.

Austin Emergency Center has been the subject of previous reports of high covid-test prices.

The center provides “high-quality health care emergency services” and “our charges are set at the price that we believe reflects this quality of care,” said Heather Neale, AEC’s chief operating officer. The law requires the center to examine every patient “to determine whether or not an emergency medical condition exists,” she said.

Curative, the lab company that billed $250 for Valfer’s PCR tests, said through a spokesperson that its operating costs are higher than those of other providers and that consumers will never be billed for charges insurance doesn’t cover. Valfer’s insurer paid $125 for each test, claims documents show.

Even at relatively low prices, testing companies are reaping high profits. Covid PCR tests sold for $100 apiece helped Quest Diagnostics increase revenue by 49% in the first quarter of 2021 and quadruple its profits compared with the same period a year ago.

“We are expecting … to still do quite well in terms of reimbursement in the near term,” Quest CFO Mark Guinan said during a recent earnings call.

Hospitals and clinics do pay tens of thousands of dollars upfront when purchasing analyzer machines, plus costs for chemical reagents, swabs and other collection materials, maintenance, and training and compensating staff members. But the more tests completed, the more cost-effective they are, said Marlene Sautter, director of laboratory services at Premier Inc., a group purchasing organization that works with 4,000 U.S. hospitals and health systems.

A World Health Organization cost assessment of running 5,000 covid tests on Roche and Abbott analyzers — not including that initial equipment price, labor or shipping costs — came to $17 and $21 per test, respectively.

Unlike earlier in the pandemic, lab-based PCR tests no longer dominate the market. Cheaper, rapid options can now be purchased online or in stores. In mid-April, some CVS, Walmart and Walgreens stores began selling a two-pack of Abbott Laboratories’ BinaxNOW antigen test for $23.99.

Regulations require insurers to cover covid testing administered or referred by a health care provider at no cost to the patient. But exceptions are made for public health surveillance and work- or school-related testing.

Claire Lemcke, who works for a Flagstaff, Arizona, nonprofit, was tested at a mall in January and received a statement from an out-of-state lab company saying that the price was $737, that it was performed out-of-network and that she would be responsible for paying. She’s working with her insurer, which has already paid $400, to try to get it settled.

Sticker shock from covid tests has gotten bad enough that Medicare set up a hotline for insurance companies to report bad actors, and states across the country are taking action.

Free-standing emergency centers across Texas, like the one Goldstein visited, have charged particularly exorbitant prices, propelling the Texas Association of Health Plans to write a formal complaint in late January. The 19-page letter details how many of these operations violate state disclosure requirements, charge over $1,000 per covid test and add thousands more in facility fees associated with the visit.

These free-standing ERs are “among the worst offenders when it comes to price gouging, egregious billing, and providing unnecessary care and tests,” the letter says.

In December, the Kansas Insurance Department investigated a lab whose cash price was listed at nearly $1,000. State legislatures in both Minnesota and Connecticut have introduced bills to crack down on price gouging since the pandemic began.

“If these astronomical costs charged by unscrupulous providers are borne by the health plans and insurers without recompense, consumers will ultimately pay more for their health care as health insurance costs will rise,” Justin McFarland, Kansas Insurance Department’s general counsel, wrote in a Dec. 16 letter.