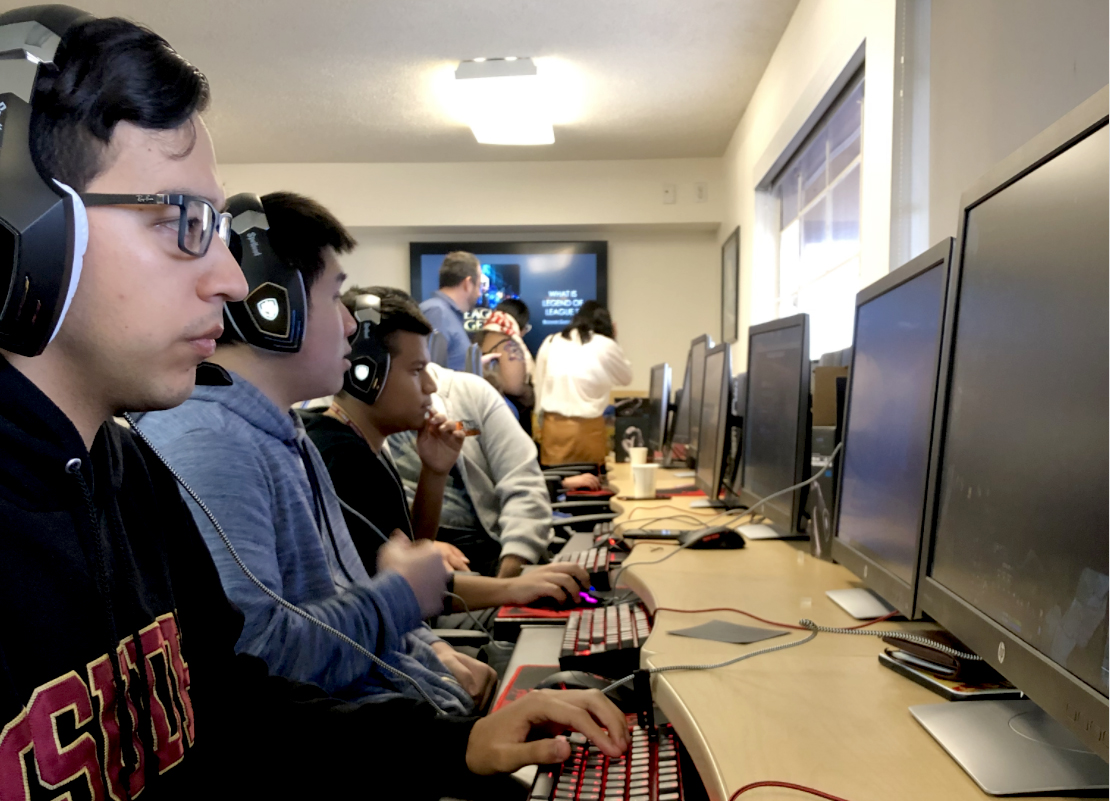 Growing up as the youngest child of four, Fernando Gomez would often pass the time by watching his two older brothers play the video games Metal Gear Solid and Final Fantasy while sitting cross-legged on his brother’s bed.

Gaming “kind of brought us together,” Gomez said. It also inspired him to create San Francisco State University’s first student-run esports program as an undergrad — experience he parlayed into a post-grad job as the digital content coordinator for the Portland Trailblazers. “That experience is 100% why I’m here today, doing what I do now,” Gomez said.

Professors and students are citing success stories like Gomez’s as they launch programs in esports — a form of competitive gaming — at colleges around the state.

At least six Cal State campuses and nearly all of the University of California campuses have created esports programs since 2015, in which students host and compete in live tournaments, sometimes funded by corporate sponsors. Both Cal State Dominguez Hills and UC Irvine offer certificates in esports, which means students can earn credit for, yes, playing video games.

Educators who support the trend point to the jobs available in gaming and other forms of digital media, while students say esports clubs and classes have given them another way to connect virtually during the pandemic.

“Higher ed needs to evolve or die,” said Dina Ibrahim, the academic advisor of the SF State esports athletic club and a professor of broadcast journalism. “We need to be teaching students relevant skills, that’s going to get them jobs in a rapidly changing landscape.”

Ibrahim and other librarians, professors, and administrators from across California State University logged on to Zoom in late March for the university’s first ever Esports Unconference, and it wasn’t a typical virtual meeting. Attendees flooded the familiar Zoom grid with photos of their favorite video games, while a medley of video game theme songs played in the background.

In order to mirror their students’ ability to connect online, organizers set up a Discord account – a community-based chat app – to communicate during the event. The goal: to network, share knowledge and ultimately expand esports and gaming to all of the university’s 23 campuses.

Ibrahim shared the syllabus for her live stream broadcasting class, which she created after she noticed the effects esports and gaming were having on the field of digital media. In the course, students learn how to market a brand, monetize it, and develop live streamed events using Twitch – an entertainment site mainly aimed at gamers – and other platforms. For their final project, they help organize and market a live-streamed tournament featuring games like Overwatch, Valorant and League of Legends.

“What I wanted to do was just provide a venue for students who are doing it anyway, to get credit,” said Ibrahim. “And also not just focusing on the gaming community; it’s really gaming, plus content creation.”

Those skills could help students land their first media jobs, said Mark “Garvey” Candella, director of student and education programs for Twitch, a $15 billion company that draws 30 million, mostly younger, visitors to its website daily. Amazon Inc. bought Twitch in 2014 for $970 million. The company makes money by showing ads to viewers, selling subscriptions, and taking a cut of any money viewers donate to streamers.

“All the skills that you’re learning and using while you participate in gaming and esports are highly transferable and valuable skills in emerging new and digital media,” said Candella, who has helped universities establish esports curriculum that uses gaming as a vehicle to teach branding, management and hardware and software knowledge.

Rhomeozon Blankas, a student who helped start the esports program in 2018, said he saw a rise in interest during the pandemic, as students turned to Discord for connectivity.

“Over the summer of COVID, like a lot of people started trying to get more involved on campus, even though they weren’t on campus,” Blankas said. “So that was basically opening the doors into competitive esports for a lot of students.”

Like other collegiate esports programs, the one at Dominguez Hills started as an informal student club and is now a thriving organization that has obtained sponsorships with companies such as Microsoft and Level Up Esports Apparel.

The university is building a new $750,000 esports lab in the campus library, according to the student-run newspaper, The Bulletin. It will be divided into three sections: a classroom, an incubator and a competition area with rows of PCs.

Tournaments and scrimmages hosted by Dominguez Hills will be broadcast on the team’s official Twitch account as well as to a live audience there at the lab. Each student member plays a unique role in marketing the events, operating the software to live stream and playing in the matches.

Campus president Thomas Parham says the idea is to “meet students where they are.”

“I firmly believe that esports can be one of those activities that educates students on the aspects of gaming culture that will successfully translate into skills and knowledge that better prepare graduates for the workforce,” Parham said.

Kieran Eng, a recent San Francisco State University graduate who ran the university’s esports club, the Gaming Gators, said the pandemic has lent legitimacy to the kind of online social events that gamers have been organizing for years.

“Nothing much has changed for us gamers,” Eng said. “But I think that a lot of people kind of now understand that it’s not just like wasting time. It’s choosing to spend your time, investing in the people around you and creating a virtual community that is just as interconnected as other physical communities.”

The number of jobs in esports nationwide more than doubled from 2018 to 2019, topping 6,000, according to Hitmarker, an online job board for the industry. The overwhelming majority were in California.

But Gomez, the SF State graduate who landed a job with the Portland Trailblazers, said that most people in academia don’t understand how the esports job market works.

For one, he said, entry-level workers often end up wearing many hats in order to stand out and progress in their careers.

“The funny thing in esports is, whatever your job title is, add five more things to it,” he said.

As colleges invest in esports, Gomez said, students will be better prepared for the multiple skill sets that the industry requires. More than 170 schools across the country have varsity esports teams, according to the National Association of Collegiate Esports, but the number with academic programs is much smaller — and students and professors involved in them say they still encounter skepticism from colleagues who see gaming as just a mind-numbing hobby.

At UC Irvine, the first California college to pioneer an esports program, students can earn a continuing education certificate but there are no plans to develop a major in the field, said assistant director Kathy Chiang.

“We don’t think that there’s enough content for that,” she said.

Finding the real estate for an on-campus esports arena can be challenging, and the digital divide that has emerged during the pandemic affects gaming, too, said Ibrahim, the San Francisco State professor. Some students lack strong enough internet at home to host live streams, and their computers are not advanced enough to house competitive games.

Still, Ibrahim says gaming in academia is here to stay.

“I think people mostly recognize that it is a huge, profit-churning component of the entertainment industry that can no longer be ignored,” she said. “You’re getting skills that are going to prime you to work in a very significant industry that’s only growing post pandemic.”

Martinez is a fellow with the CalMatters College Journalism Network, a collaboration between CalMatters and student journalists from across California. This story and other higher education coverage are supported by the College Futures Foundation.