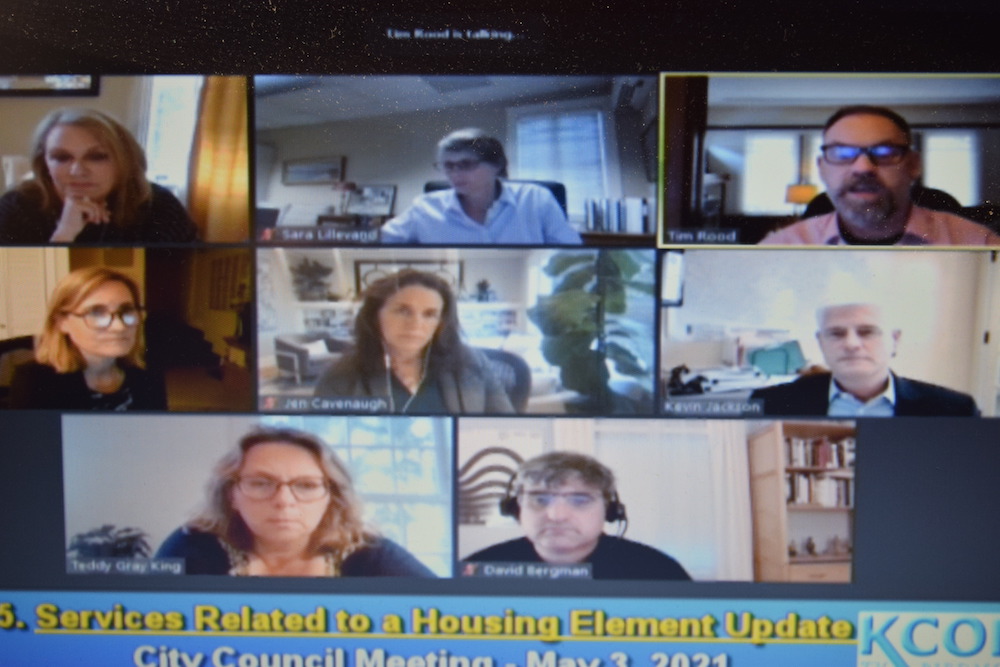 David Bergman of Lisa Wise Consulting, lower right, talks to Piedmont City Council members Monday night before the vote to hire the San Francisco-based consulting firm to help the city create its 2023-2031 plan for almost 600 new homes in the city,

The City Council on Monday approved spending almost $700,000 for a consultant to help guide the city through a challenging housing update of the city’s general plan, expected to require Piedmont to accommodate almost 600 additional new residences by 2031.

That consultant is San Francisco-based Lisa Wise Consulting, Inc., the only firm to fully respond to the city’s request for proposals for a consultant to help lead the city’s work as part of the Regional Housing Needs Allocation process Piedmont and other cities must do to show the ability to accommodate much-needed regional housing growth.

As required by the state, the city must prepare and submit an updated “housing element,” the eight-year plan for how Piedmont will accommodate housing growth, due to be submitted to the state by the end of 2022.

But that 2023-2031 update, the sixth such planning cycle, will be a much bigger task than previous ones, as Piedmont (and other Bay Area cities) will be called upon to find much more space for new housing than ever before. In Piedmont’s case, the expected number of new residences the city will be expected to plan for is 587. (The previous cycle, from 2015 to 2022, called for 60 new residences in Piedmont).

“That number (587) makes this a more challenging project than before,” Kevin Jackson, Piedmont’s director of planning and building, told the City Council. With Piedmont largely built out, with few vacant parcels, the task to create a suitable housing submission to the California Department of Housing and Community Development for certification will be supremely challenging.

“That makes it more difficult to find sites for the housing element, and on which we can expect development to occur,” Jackson said.

The fact that every city in California is having to update its own housing plan has made attracting consultants a highly competitive process, Jackson said, meaning some cities have had trouble attracting multiple consultants’ proposals.

David Bergman of Lisa Wise Consulting told the council Monday night that the “587” number might seem intimidating, but that it gives the city an opportunity to welcome many new residents that figure to improve Piedmont’s quality of life.

Lisa Wise Consulting will also work with San Anselmo-based Plan to Place to provide a community engagement plan, project messaging, outreach materials, and a project specific website to be launched soon, all part of a “Piedmont is Home” branding effort.

Sarah Karlinsky of the Piedmont Racial Equity Campaign told the council Monday night she welcomes Bergman’s words. Bringing more affordable and inclusive housing to Piedmont, she said, can only benefit all residents. She pledged Lisa Wise and the city will get a lot of help with this effort from local groups.

“You’ll have a lot of wind in your sails from the groups interested in this process,” Karlinsky said.