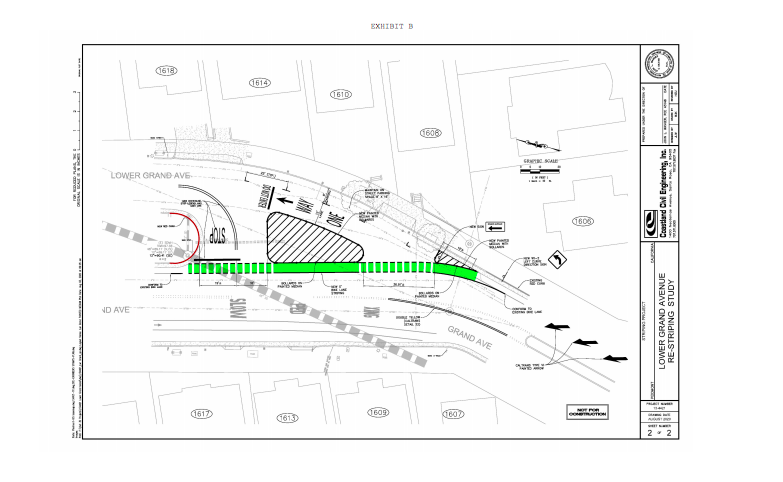 The City Council on Monday approved traffic-calming measures at the intersection of Grand Avenue and Lower Grand Avenue, giving city staff permission to seek bids for the project, described by the city engineer as “mostly a striping project” but one that may evolve into something more substantial in the future.

Council members and city staff acknowledged that intersection can be hard to negotiate, especially for drivers unfamiliar with it. A major quirk, they acknowledged, is that northbound traffic on Grand has to make a slight turn to the left to stay on Grand, while traffic bound for Lower Grand continues straight.

Among the changes approved for the intersection are:

Piedmont Public Works Director Daniel Gonzales said the “geometry” of this intersection is also problematic in that straight-on entry to Lower Grand from Grand can result in cars coming onto Lower Grand at higher-than-ideal speeds. Three vehicle accidents have happened here over the past three years on this, the city’s busiest street, Gonzales said.

As long ago as 2014, Piedmont’s Pedestrian and Bicycle Master Plan cited the Grand-Lower Grand intersection (among others) as needing “additional traffic calming.”

“There are very unique angles, and that causes confusion,” Gonzales told the City Council. “And we want to make cyclists as visible as possible.”

Physically improving the intersection to more directly guide the flow of traffic to continue onto Grand Avenue has been in the planning stages for several years, but has been delayed, including by East Bay MUD work on Lower Grand. Among the long-term ideas under consideration is a built-up fully landscaped triangle where the painted lines now exist (Councilwoman Jen Cavenaugh said she envisions a planted water-gathering bioswale in that spot one day).

City staff and council members said the plan approved Monday night is a cheaper alternative for the short term.

Councilwoman Conna McCarthy said she hopes installation of the bollards, providing 3-D definition to the existing two-dimensional painted triangle “island,” will cut down almost completely on illegal or potentially dangerous U-turns made at that intersection.

Expressing concern for bicyclists, Councilwoman Betsy Smegal Andersen asked Gonzales whether carving a foot or two out of the eastern sidewalk on Lower Grand could be done to widen that portion of Lower Grand. City Engineer John Wanger said that could be investigated, but Gonzales said doing the paint-and-bollards triangle first will show whether the curb cutting or any other measures would merit further consideration, and further planning.