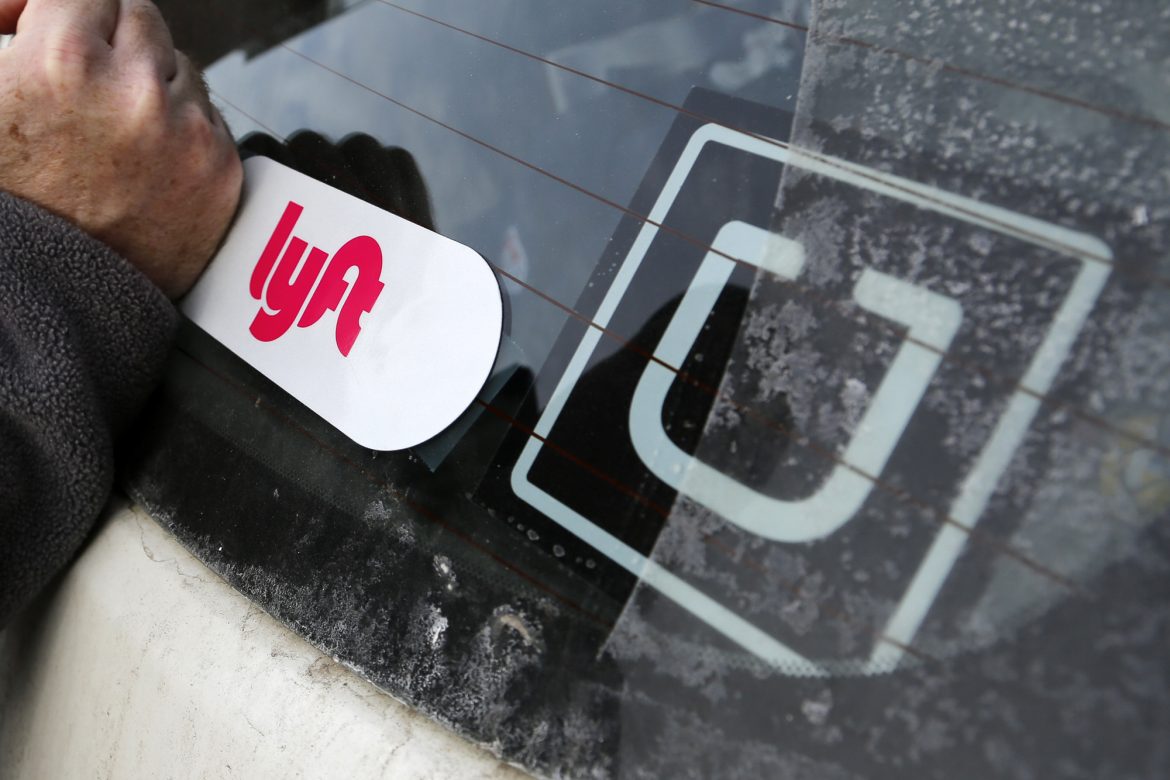 Environmental groups, labor advocates and drivers are calling for California regulators to ensure that the companies, not the drivers, cover the costs of Lyft and Uber operators switching to electric cars. Photo by Gene J. Puskar, AP Photo

Ninety percent of miles logged by Uber and Lyft drivers in California must be in electric vehicles by 2030 under a state mandate adopted Thursday.

The so-called Clean Miles Standard, unanimously approved by the California Air Resources Board, aims to curb the climate impacts of emissions from ride-hailing trips. It’s an ambitious target: In 2018, electric vehicles accounted for less than 1% of miles traveled by Uber and Lyft drivers in California.

The big question for the gig-economy fleets is: Who will pay for the cleaner cars?

It’s not a question that the air board could answer in its three-hour public hearing Thursday. While a 2018 law charged the air board with setting the targets, the California Public Utilities Commission will be in charge of enforcement.

Environmental groups, labor advocates and drivers are calling for California regulators to ensure that the companies, not the drivers, cover the costs of electrifying their fleets.

Air board member Nathan Fletcher, a San Diego County supervisor, voiced concerns at the meeting about Uber and Lyft putting the burden on drivers since the rule has no mechanism to ensure they don’t.

“I think we should have every assumption moving into this that an industry that is predicated and based on labor exploitation will simply find a way to exploit their workers in order to do this,” Fletcher said.

Representatives of Uber and Lyft told CalMatters before the vote that they support the 90% mandate, but are pushing for state funding and flexibility if they encounter delays meeting the targets.

“We support this regulation and we support the ambitions that it sets out,” Adam Gromis, global lead on sustainability policy at Uber, said. “We do think that there’s work to be done in terms of pairing and marrying the regulation side with supportive policies that can ensure a fair transition for drivers.”

Paul Augustine, a representative for Lyft, said during today’s hearing that Lyft has consistently pushed for aggressive targets for its fleet, but accomplishing them will take more work from policymakers, environmental groups, auto manufacturers and charging network providers to defeat the barriers to electric car ownership.

“We are disappointed that the efforts of the past years have culminated in metaphorical sticks with no carrots.”

In a letter sent to the board this month, Lyft was more assertive: “While we are pleased to see aggressive environmental targets, we are disappointed that the efforts of the past years have culminated in metaphorical sticks with no carrots.”

Yearly costs for ride-hailing companies and drivers, including electricity and home chargers, will reach roughly $400 million in 2030, according to an air board staff report. But staff predicts that savings, including on gasoline and maintenance, will far outstrip them — leading to net benefits of $215 million in 2030.

An Uber or Lyft driver who racks up 30,000 miles would save $2,212 in 2027 if they are able to take advantage of government subsidies. Without those incentives, air board staff predict that yearly savings drop to roughly $712.

Still, an air board analysis of driver ZIP codes estimates that about 56% of ride-hailing drivers could be from low-income or disadvantaged communities who may not be able to afford the switch to an electric vehicle.

Moore called for any state incentives to go directly to drivers. “This is going to basically be a green badge of honor for Lyft and Uber, when it’s the drivers that are paying for this conversion,” Moore said. “And it’s not right.”

Under the new regulation, in two years 2% of miles traveled by Uber and Lyft drivers fleetwide must be in electric vehicles, ramping up to 30% in 2026 and 90% in 2030. The 90% mandate will require electrifying less than half of the high-mileage drivers’ vehicles, according to an air board analysis.

It is expected to cut greenhouse gas emissions by 1.81 million metric tons from 2023 to 2030, plus nearly 400 tons of smog-forming gases and particles. That’s equivalent to removing nearly 400,000 cars from California’s roads.

The fleet is fast-growing so the environmental impact is increasing. Rideshare drivers logged about 1.2% of the total miles traveled by light-duty vehicles on California’s roads in 2018, up from 0.05% in 2014. Uber and Lyft dominate the ride-hailing sector, which produces about 1% of the greenhouse gases from light duty cars and trucks in California. Overall, transportation is the biggest greenhouse gas polluter in California.

The fleets have outsized climate impacts, pumping out about 50% more carbon dioxide in 2018 than the average personal vehicle for every mile traveled with a passenger, according to an air board analysis.

That’s because ride-hailing drivers travel a lot between trips or while waiting for a fare. These so-called “deadhead miles” without a passenger account for about 40% of total miles traveled by ride-hailing vehicles.

Factoring in public transit, the Union of Concerned Scientists pegs the impact even higher — estimating that ride-hailing trips produce 69% more planet-warming pollution than the forms of transportation they replace.

“The idea that it’s important to set weak standards in the early years in order to protect drivers is actually exactly backwards.”

The rule also calls for cutting the companies’ carbon dioxide emissions from miles traveled with passengers to zero by 2030, partially by using credits earned by encouraging public transit and improving walkability and access to biking.

Air board members expressed frustration with how little data they have about California’s ride-hailing drivers and how this policy might affect them.

“How does this impact our drivers? Are we disproportionately affecting people who are people of color here in California? We have no data, no demographics. We’re not requiring it. So how are we going to properly evaluate this standard that we’re creating?” said air board member Davina Hurt, who represents San Mateo County cities on the Bay Area’s air district board.

The board urged the California Public Utilities Commission to collect key socioeconomic data on drivers in order to better evaluate the policy’s effects. The Commission has fined Uber millions of dollars in the past for failing to comply with information requests.

Air board member Daniel Sperling, founding director of the UC Davis Institute of Transportation Studies, proposed weakening the electrification targets in favor of pushing ride-hailing companies to instead reduce miles traveled by their fleets. But the proposal was voted down with only two votes in favor from Sperling and air board vice chair Sandra Berg.

Starting too slowly, Weiskopf said, will allow the companies to lean on state and federal subsidies as well as on higher-income drivers who were already going to purchase electric vehicles, rather than provide incentives to help lower-income drivers afford them.

“Then the companies can free-ride off of investments that its employees are making — sorry, contractors are making,” Weiskopf said. “The idea that it’s important to set weak standards in the early years in order to protect drivers is actually exactly backwards.”

‘No assurance’ drivers will be reimbursed

An earlier proposal, released last summer, would have electrified 60% of vehicle miles traveled.

But Lyft already pledged to electrify its entire fleet by 2030, and Uber has the same goal for vehicles in US, Canadian and European cities, with full electrification by 2040. Uber also said it would commit $800 million to help drivers transition in the United States, Canada and Europe.

Joshua Cunningham, the air board’s branch chief of advanced clean cars, said it’s up to the companies to determine how to meet the targets.

“We do not dictate how the companies spend their money to comply. We don’t dictate whether they give money to drivers. That’s up to them,” Cunningham said. Still, he said, “We hope that the companies will provide financial incentives to drivers.”

Because of Uber and Lyft’s exemptions from labor rules, “there is no assurance that (ride-hailing companies) will pay drivers for the extra costs of electrification,” the staff report said.

A 2021 Chevrolet Bolt EV can start around $36,500, and the costs of installing and maintaining a home charger can run more than $1,400 starting in 2023, the air board says. Renters or people without garages might have to rely on public charging, which can be pricier, Cunningham said.

Government funding shouldn’t take the place of investments from the companies themselves, the Union of Concerned Scientists said. “It would cost less than 4 cents per ride-hailing mile driven to cover the upfront costs of drivers.”

Uber and Lyft together spent more than $108 million on a massive campaign to win voter support for Proposition 22, which exempted companies that employ drivers through apps from a law requiring them to classify their workers as employees and offer employee benefits.

“Those 200 plus million dollars could buy a lot of (electric vehicles),” said John Balmes, a professor of medicine at the University of California, San Francisco and a member of the air board.