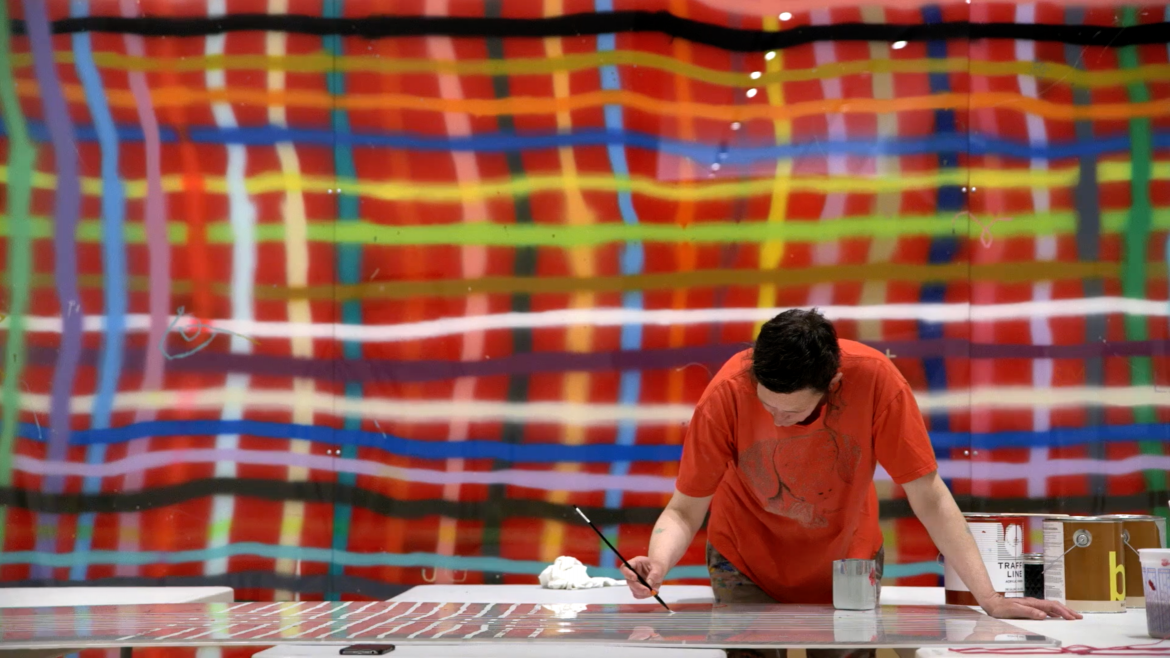 Oakland artist Alicia McCarthy's work is profiled in "Tell Them We Were Here." (Courtesy of BAMPFA)

A clear-eyed portrait of the Bay Area arts scene emerges from a dense fog bank of justified urban concerns in “Tell Them We Were Here,” a documentary receiving its world premiere Friday via Berkeley Art Museum and Pacific Film Archives’ streaming platform.

This hopeful yet realistic tour of the artist community offsets the prevailing worry that San Francisco’s artistic mojo is getting snuffed out because of skyrocketing rents and other Big City maladies.

That doesn’t paint a complete picture, the father-son filmmaking team of Griff and Keelan Williams observes in “Tell Them We Were Here.” Their film acknowledges the hardships of living here and the hobbling effects those have had on the creative community. But their focus mainly shifts to highlighting and celebrating resilient Bay Area artists who are — as the film’s title attests — eking out a modest living while they create and inspire and put community and connection over profit and fame.

Griff Williams knows of what he films. He’s the founder of San Francisco’s Gallery 16, and after witnessing for 25 years all the exciting artistic innovations in this region, he decided to pay tribute to it in his first feature. You can stream “Tell Them We Were Here” at https://bampfa.org/event/tell-them-we-were-here.

“I was thinking about how do you honor this place that we feel so lucky to be a part of in a way that addresses some of these absences,” he says. “We’ve always known there’s been a spirit in the Bay Area that clearly didn’t have the same kind of careerist trajectory that other places do.”

While the arts scenes in New York and Los Angeles clamor and receive more splashy recognition and endless news reports bellow out the millions spent on a “masterpiece” at an auction, the San Francisco scene thrums with a different, less money-focused vibe, Williams says.

“There’s this desire to live a sort of creative life rather than a career,” he says.

To capture some of the standout Bay Area examples, he and his son interviewed close to 60 artists, musicians and curators. It was a hard decision to narrow it down to just eight. But they did, and are hoping to share other stories in the future with short features.

The Bay Area artists profiled include:

Tucker Nichols: His drawings have been featured in numerous publications and his “Flowers for Sick People” continue to attract more interest. He is also featured in the “Close to Home: Creativity in Crisis” SFMOMA exhibition that spotlights artists’ works in response to COVID-19.

Jim Goldberg: The acclaimed B&W photographer turns his lens to the marginalized in society and treats his subjects with care and respect.

Lynn Hershman Leeson: The artist and filmmaker overcame sexism in the arts and entertainment world and created an alter ego for her rather revolutionary film “Conceiving Ada.”

Nigel Poor: The artist, podcaster and CSU Sacramento professor of photography co-founded “Ear Hustle,” a groundbreaking podcast that details the lives of San Quentin State Prison inmates. The podcast was a finalist for a Pulitzer Prize.

Michael Swaine: The artist, inventor and designer with an M.A. in design from UC Berkeley garnered attention for pushing a cart with a sewing machine on it throughout the streets of San Francisco and offering to mend clothing for those in need.

Alicia McCarthy: The Oakland artist and Mission School member created an epic mural near the Civic Center BART station on Market and Seventh streets in San Francisco. It’s a striking image on a huge wall.

Sadie Barnette: The Oakland-born artist can do just about anything: photography, drawing and large projects. One of her most topical projects uses a 500-page FBI file that was kept on her father Rodney Barnette, founder of the Compton chapter of the Black Panther Party, to powerfully address racism.

In addition to these artists’ stories, the documentary weaves in insights and observations from other notable Bay Area arts figures, including Eleanor Coppola, Tabitha Soren, and Matt Gonzalez, amongst others.

While some of the works highlighted in “Tell Them We Were Here” might be recognizable, others won’t be. That’s common for artists, Williams says, adding that most wouldn’t even get noticed if they walked right through the door and sat next to you.

Another common thread in “Tell Them We Were Here” is how these artists lead lives counter to what most consider the American Dream. They’re not looking for a white-picket fence existence, he says.

“You know you’re giving up certain things in order to pursue things that are more meaningful,” he says. “And you know that makes it hard to be in a place like San Francisco with the rents being the way they are.”

Indeed, that has forced artists to venture away, but that’s not a new problem by any means, Williams says.

“In the 28 years that I’ve been here it’s always been an ebb and flow of people kind of making pilgrimage to the place and then leaving because it’s crushing them,” he says. “That’s not uncommon. That’s been going on through the course of time I’ve been here and probably won’t ever cease.”

And while many artists keep what they do on the down low, there are times when their work gets thrust into the public spotlight.

Take the story of Nichols. In his workspace, he creates small, letter-sized portraits of flowers and other drawings and then sends them — at no charge — directly to people who are struggling.

“PBS NewsHour” got wind of it, filed a report during the pandemic, and Nichols was inundated. Shortly after it aired, he received 1,500 requests.

“That’s more paintings than most artists make in their lives,” Williams says. “And he’s sending them with these handwritten notes. The emails were just heartbreaking.”

The bundles of letters requesting the drawings create a moving image in “Tell Them We Were Here,” which — in keeping with the outside-of-the-box thinking of its subjects — is following a unique streaming path itself.

Since BAMPFA supports many of the artists featured in the film, it seemed a logical next step to debut “Tell Them We Were There” there.

“The BAMPFA had so much of a role in much of the work we’d been following in this film that we thought it would be a good first place to stream it,” Williams says. In the future, they’re talking about having the film shown in the theater with some artists there.

For now, Williams hopes the film not only brings these Bay Area artists into the homes of arts lovers near and far but also relates how art comes from the heart and the soul not simply the pocketbook.

“Maybe life is more fulfilled when you’re living in the world of ideas,” he adds.

One thought on “A new film, to premiere online via BAMPFA, explores how 8 Bay Area artists are surviving”