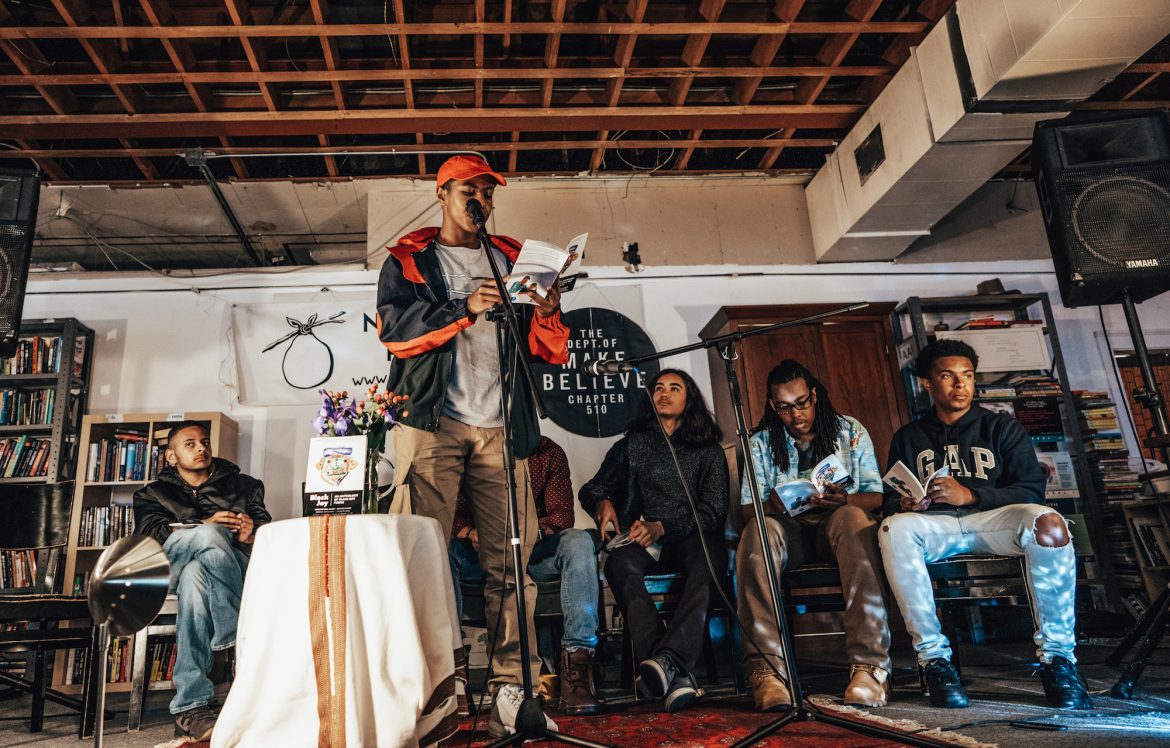 Samuel Getachew reads his poetry published in “Black Joy: An Anthology of Black Boy Poems” (Nomadic Press) at the Dept. of Make Believe in Oakland. (Photo courtesy of Robbie Sweeny)

An epic poem, by virtue of its form, starts in the middle of things. To put pen to paper today of all days, what are we in the middle of? The pandemic plods on. Schools have their doors ajar, but they’re not fully open. Stadiums are letting in more than cardboard fans, and concerts are happening in the world. Innumerable milestones have been complicated; innumerable doors will not open for the reasons they did before 2020. Epics are narratives already underway.

For Janet Heller, CEO and co-founder of Chapter 510 & the Dept. of Make Believe, it’s the perfect medium for the people of Oakland to express themselves on the same page, albeit a page the size of a soccer field. All month — National Poetry Month — Chapter 510 has been disseminating prompts on Instagram to bear poem-shaped fruit from Oakland residents to eventually combine and bind into a free book centered on themes of “power.”

After more than a year of remote operations, Chapter 510 will host a virtual and in-person open house to commemorate what is now a citywide holiday; this Friday, and every last Friday in April from here on out, is known as Write Your Roots Day.

“Writing is an act of liberation,” Heller says. “People are excited just to gather in some way and see people they’ve loved and not seen for a year: kids, teachers, volunteers. It’s a reunion.”

Heller co-founded Chapter 510 in 2013 with Tavia Stewart, a fellow teaching artist with previous leadership roles in National Novel Writing Month and various hats worn for 826 Valencia. While 826 Valencia’s and Chapter 510’s goals for enriching and publishing children across the bay overlap, the two organizations aren’t affiliated.

Chapter 510 and its book-making brick-and-mortar, the Dept. of Make Believe, are a “third space” away from school and home for children to try their hand at writing in many of its forms. Since Chapter 510’s last live event last March, it’s had to transition to a Zoom model for its workshops, and participants weren’t able to physically congregate for last year’s inaugural Epic Poetry Day.

The event was borne out of a smaller scale event that Chapter 510 would host with students at Acorn Elementary to write as long a poem as they could in a single day; after the 2018 Camp Fire canceled the normally outdoor event, Heller thought to expand the scope and allow adults to contribute.

Aspiring poets have until Friday to respond to prompts and contribute to a hopefully soccer-stadium-length, lightly edited epic poem. Most curiously, three members of the Oakland Roots Sports Club will perform poems they wrote in a private workshop with Chapter 510. It’s part of what the club’s Chief Purpose Officer Mike Geddes calls “a purpose partnership.”

English by birth, “I’ve worked in soccer my entire professional career; this is different to me,” says Geddes of Oakland Roots’ “holistic” approach to founding a soccer club.

The intention behind player selection, collaborations and transparency stand out in a sports world where teams and tax codes are often exploited for profit. Here in Oakland, “it’s similar to how football clubs were started in England. They didn’t start as commerce enterprises; they were community efforts,” he says. Community is at the core of this collaboration.

Growing up queer in Florida, Heller was drawn to writing and community; it would be her life’s work to bring them together. After earning her M.F.A., she began teaching writing to high school students, eventually developing what is now the national WritersCorps organization to provide writing enrichment to public school students regardless of their budget; in a similar vein, all Chapter 510 programs are free.

Chapter 510 was founded specifically to serve Oakland’s youth of color, which shows in how all the staff teaching artists in the organization identify as BIPOC. There are workshops and after-school programs for students ages 8 to 19, OUSD classroom sessions for children to explore storytelling and, for eight sixth-graders this year, the opportunity to publish their own novels. A musical is in the works.

“We have more commitment to long-term and in-depth opportunities to serve fewer kids many times,” Heller says. “Some of our students we’ve known for seven years. Our vision is every youth in Oakland writes with confidence and joy.”

While the physical act of writing is hardly calisthenic, and soccer players aren’t routinely asked about their fondness for “The Iliad,” it’s easy to see Chapter 510’s partnership with Oakland Roots Sports Club as unlikely. But the values, both Heller and Geddes agree, are the same. In fact, Geddes brought his kids to the Dept. on a “hunch.” It worked out.

“I just love what Chapter 510 does, and we naturally found an affinity between ourselves, that we could elevate each other’s messaging,” Geddes says. The club is also working on a holistic wellness program for its athletes called Nurtured Roots, to imbue them with tools and education for social activism, local history and what their careers after soccer can look like. And of course, more poems.

“How can creative expression help the city of Oakland?,” Geddes says. “We believe we can contribute to that.”

“Soccer is the most loved sport in the world,” Heller says. “Many countries play soccer very passionately, and that’s where the community gathers. The passion for Oakland, we share that with Oakland Roots.”

The Friday’s final epic poem won’t be released until the fall, hopefully on the Oakland Roots field to a crowd of fans and laureates alike. Attendees can tune in to the @Chapter510 Instagram or (masked) in-person at the new Dept. of Make Believe at 546 Ninth St. in Oakland.