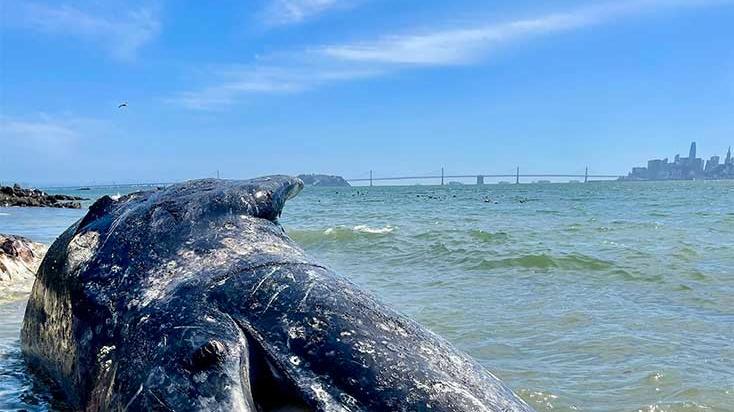 At least one gray whale died last week in the Bay Area after being struck by a boat, the Sausalito-based Marine Mammal Center said Friday.

The nonprofit, which focuses on the protection and rehabilitation of marine mammals, determined that one of two gray whales found dead Thursday near Marin County had been killed by blunt trauma due to being struck by a ship.

The whales were found separately at Angel Island State Park and Muir Beach, according to the Marine Mammal Center. A necropsy, or animal autopsy, on the whale found at Muir Beach determined it had bruising and hemorrhaging to muscles around the animal’s jaw and neck that are consistent with the blunt force trauma of a ship strike.

A necropsy of the whale found at Angel Island did not find any initial evidence of similar trauma, but the Marine Mammal Center intends to reexamine the whale in the future to fully confirm that the whale did not die due to human interaction.

According to the Marine Mammal Center, four gray whales have been found dead in the Bay Area this month. The cause of death has been confirmed for only the whale found at Muir Beach.

“Our team hasn’t responded to this number of dead gray whales in such a short span since 2019 when we performed a startling 13 necropsies in the San Francisco Bay Area,” said Dr. Padraig Duignan, the Marine Mammal Center’s director of pathology.

“Gray whales are ocean sentinels due to their adaptability and foraging habits, meaning they have a lot to tell us about the health of the ocean, so to see the species continue to suffer with the added threats of human interaction is a major cause for concern,” Duignan said.

Since 2019, marine biologists in the Bay Area have noticed several gray whales with physical abnormalities during their annual migration to cool Arctic waters.

The National Oceanic and Atmospheric Administration declared an Unusual Mortality Event for gray whales in 2019.

Since the NOAA’s last gray whale population assessment in 2015 and 2016, the agency has determined that nearly one quarter of gray whales migrating up the West Coast have died.

But that mortality rate could be even higher, according to the NOAA and Marine Mammal Center, because of observation limitations during the COVID-19 pandemic.

“It’s alarming to respond to four dead gray whales in just over a week because it really puts into perspective the current challenges faced by this species,” Duignan said.

Members of the public can report whale sightings to the Marine Mammal Center.

The public can also report dead whales and whales in distress to the Marin Mammal Center’s rescue hotline at 415-289-7325.