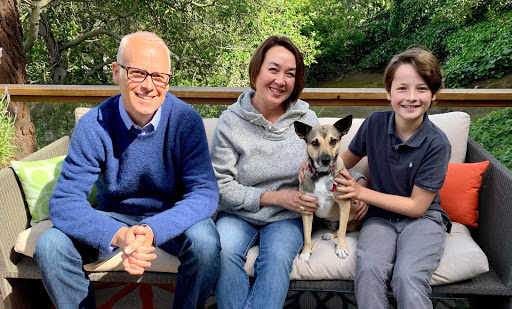 Age: Unknown, but the vet thinks Sio is around 4 years old.

Adoption Story: Our family was vacationing with friends in Fiji. A small, very skinny, and tick-covered dog was hanging around our rented house, hoping for scraps of food. The property’s caretakers told us they nicknamed the dog “Sio Sio,” which means “See” in Fijian, because they would see her everywhere. We fell in love with Sio Sio and worried about her future if she remained in Fiji, so we worked with a local animal rescue group to bring her to the United States.

Dislikes: Sio can be fearful of men with hats. She has a large scar, and we think she may have suffered abuse at some point.

Interesting Facts: If we encounter tall grasses on our walks, Sio goes into a trancelike state, slowly and stealthily moving the grass aside with her snout to see what might be hidden. We think she used to hunt for rodents to survive in Fiji.

Anything Else? Sio was shy and timid when we met her but has blossomed into a confident, full-of-personality member of the family. What a testament to the power of consistent love and stability!