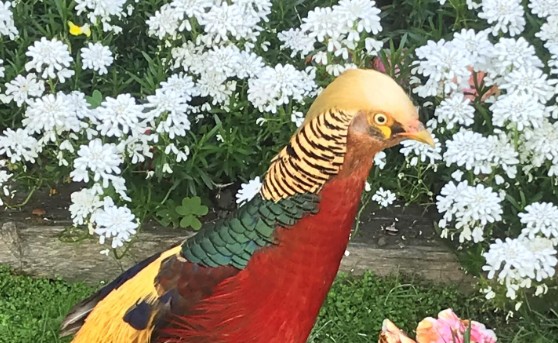 The Peninsula Humane Society & SPCA staff is looking to put a golden pheasant up for adoption after it was found as a stray in San Mateo.

The PHS/SPCA rescue staff brought the adult male bird to its shelter after a good Samaritan reported that a bird in her front yard was injured and unable to fly.

An examination showed the bird was missing most of his tail feathers and several of his primary wing feathers were broken, rendering him unable to fly.

Based on his injuries, they believe he may have been attacked by another animal but managed to escape.

“A golden pheasant is an extremely rare animal for our shelter, and it’s actually quite exciting to have such a beautiful bird available for adoption,” said PHS/SPCA Communications Manager Buffy Martin Tarbox.

They named the golden pheasant Lord Pheatherington, which is inspired by the popular television series “Bridgerton.”

Since arriving at the shelter on April 13, no one has come forward to claim the golden pheasant, which is why the humane society is making him available for adoption.

While Lord Pheatherington’s age is unknown, the golden pheasant is looking for a new home that would include an outdoor, predator-proof, fully covered enclosure to feel secure.

People interested in meeting Lord Pheatherington can call the humane society at 650-340-7022.