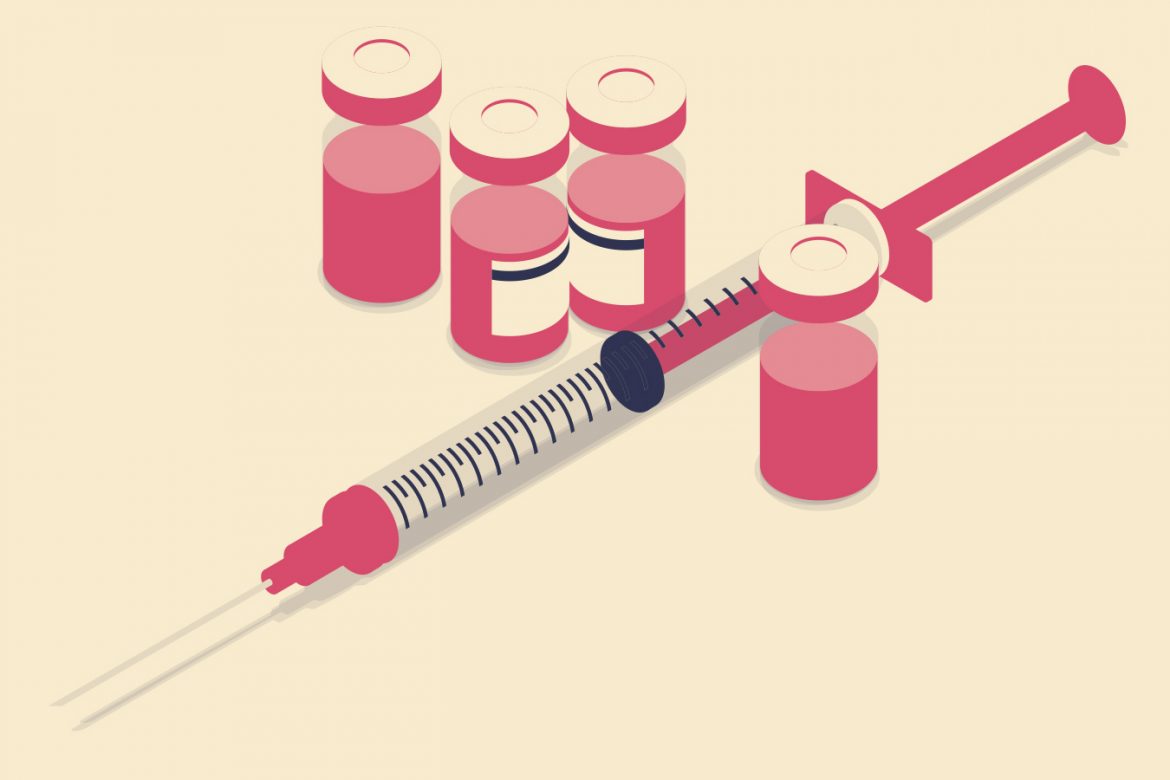 Californians as young as 16 are next in line for the Covid-19 vaccine, potentially moving the state another step closer to reopening all schools for full-time in-person instruction. But whether vaccines help to reopen schools depends on whether parents are willing to get their children vaccinated.

On April 15 eligibility for the vaccination will extend to Californians 16 and older. That minimum age could drop even lower in the coming months. Last week, Pfizer-BioNTech announced that its vaccine was “100 percent effective” and safe for children as young as 12. The company plans to ask the U.S. Food and Drug Administration to approve the vaccine for use in adolescents age 12-15 before the beginning of next school year.

“I think this is a game changer, and I think a great opportunity for advancing the reopening of our schools for in-person instruction,” State Superintendent of Public Instruction Tony Thurmond said. “I guess we have to see what the interest will be and the uptake will be as parents make decisions about it.”

School districts around the state have been reopening schools in recent weeks in mostly hybrid modes of instruction, with students rotating onto campuses either a few hours a day or a few days a week.

Schools in counties that have moved out of the purple tier, the most restrictive tier of the state’s Covid-19 tracking system, can fully reopen for in-person instruction if county officials agree. But districts must adhere to social distancing requirements in classrooms, buses and other areas on campus that make a full reopening difficult. The restrictions could be eased if infection rates decline as more people are vaccinated.

Victor Contreras wants to get his two teenagers vaccinated as soon as possible, although he doesn’t plan to send them back to the Cosumnes Oaks High School campus in Elk Grove until next fall. The family is concerned they might bring the virus home to their elderly grandparents or their mother, who has an underlying condition that makes her vulnerable to the virus.

“We have come this far, why do it now?” Contreras said. “In a way, I’m glad some are going back to school. It will give the district the chance to do a test run on a smaller scale. I am thinking there won’t be an option (for distance learning) come August.”

Contreras would feel more comfortable about sending his son, Victor Contreras Jr., 17, and his daughter, Christina, 15, back to the campus if everyone there is vaccinated.

“I would think any parent who wants their kid to have a vaccine would feel comfortable knowing that the people around them were vaccinated,” Contreras said. “I would hope that the adults who work with the kids in the schools would be vaccinated soon. It would be a shame if someone were to get sick because of a teacher.”

Despite some parents’ concerns, there is no indication that state officials plan to mandate that students or their teachers be vaccinated.

California’s teachers moved to the front of the Covid-19 vaccine eligibility list and began getting vaccinations in February. On March 1, the state began designating 10%, or 75,000, of its vaccine doses each week for school employees. Last month, Gov. Gavin Newsom announced that over 200,000 teachers had been vaccinated.

The recent decision to extend vaccinations to everyone age 16 and older is likely to impact California universities and colleges the most. The transmission of the Covid-19 virus is higher among adults. And while Rutgers University in New Jersey announced last week that it would make the vaccination mandatory for its students, no California university has made that determination yet.

In January, the University of California announced plans to return to primarily in-person instruction in the fall, although each campus will develop plans based on local conditions. University officials said the reopening plan is largely due to anticipation that Covid-19 vaccines will soon be available to students. The university is encouraging vaccinations for all students and staff, but has no plans to mandate the vaccine.

California State University decided not to mandate the Covid-19 vaccine after the university’s general counsel researched the issue, said Michael Uhlenkamp, senior director of public affairs for the university system. The university’s attorney determined that it can’t mandate vaccinations because they currently are authorized only for emergency use.

While CSU doesn’t plan to require vaccines for all students and staff, it could mandate that certain populations of students, like student athletes or residents of campus dorms, get vaccinated, Uhlenkamp said.

“We are still looking into that, but if we move forward it would look different at every campus,” he said.

Likewise, there is no plan to mandate vaccines for students attending one of the 115 campuses in the California Community Colleges system, although students can get vaccinated at one of the dozens of community vaccination sites it operates on campuses.

Variants could be threat to younger children

There is precedent for requiring vaccinations. Under state law, children at public K-12 schools must be immunized against 10 serious communicable diseases if they want to attend public or private schools and child care centers. Studies have linked clusters of unvaccinated children to outbreaks of measles, pertussis and chicken pox. Most universities also mandate some immunizations in order to attend.

“Experiences from the U.K. and several other states in the U.S. have all shown that opening schools safely can be achieved with masking and physical distancing,” he said.

But a recent surge of variants has some infectious disease experts concerned about infections among youth. New, more infectious variants of Covid-19 are spreading and the number of cases increasing, leaving young unvaccinated people vulnerable, said Centers for Disease Control Director Dr. Rochelle Walensky in a White House briefing Monday.

“As the trends and data have been indicating, cases are increasing nationally, and we are seeing this occur predominantly in younger adults,” Walensky said. “This is why you’ve heard me so clearly share my concern. We know that these increases are due in part to more highly transmissible variants, which we are very closely monitoring.”

Dr. Michael Osterholm, director of the Center for Infectious Disease Research and Policy at the University of Minnesota, said the variants are a threat to younger children as well. He said 749 schools in Minnesota have cases of the B117 variant, which is 50% to 60% more contagious than other strains of Covid-19.

Osterholm, once a strong supporter of reopening K-8 schools, seemed to be reconsidering his stance on “Meet the Press” on Sunday. He called the B117 variant a “brand-new ballgame.”

“We are now seeing the other aspect of this B117 variant that hasn’t been talked much about and that is the fact that it infects kids very readily, unlike the previous strains of the virus. We didn’t see children under 8th grade get infected often, or they were not frequently very ill,” Osterholm said. “They didn’t transmit to the rest of the community. That is why I was one of those people very strongly supporting reopening in-class learning. B117 turns that on its head.”

Currently, 16- and 17-year-olds are only eligible to receive the Pfizer-BioNTech vaccine, as the Moderna and Johnson & Johnson vaccines have only been authorized for use in adults 18 and older. All three companies have begun vaccine trials on children.

Elizabeth McWhorter is eager for vaccines to be approved for younger children. Her son Caleb, 7, and her 4-year-old daughter, Calista, will remain in distance learning until they are vaccinated. Caleb attends Emma C. Smith Elementary School in Livermore. Next school year his sister will be enrolling in transitional kindergarten, which is an extra year of kindergarten for 4-year-olds who turn 5 between September and December. Regular kindergarten requires that a child is 5 by Sept. 1.

The family has been careful to stay home and away from others because Caleb has a seizure disorder that has required him to be hospitalized and put on a ventilator in the past. The family doesn’t want to risk exposing him to Covid-19, McWhorter said.

McWhorter is hoping that Caleb can get on a priority list to get the vaccine soon. But she worries that she may never feel comfortable with returning her son to in-person instruction on a school campus because some children won’t be vaccinated.

A recent statewide survey by the Public Policy Institute of California found that 1 in 5 California adults surveyed are unlikely to get the vaccine.

Leah Russin, executive director of Vaccinate California, a parent advocacy group, is so confident in the vaccines that she wants to sign up her two children, ages 1 and 7, for the vaccine trials.

She doesn’t think the vaccines should be mandated while they are still authorized for emergency use and hopes a mandate is not needed in the future.

“My guess is a lot of people will want to get their children vaccinated, and once others see they are safe and effective they will want them too,” Russin said. “Hopefully, if carrots are effective, we won’t need the stick.”

Pfizer BioNTech Covid-19 vaccine trials on adolescents age 12 to 15 were 100% effective, exceeding earlier tests of the vaccine on 16- to 25-year-olds, according to the company. It plans to ask for emergency use authorization from the Federal Drug Administration to administer vaccines to children between age 12 and 15. The company is now testing the vaccine on children age 6 months to 11. The three-phase trials will enroll about 4,644 children.

Moderna began conducting Covid-19 vaccine trials on adolescents age 12 to 17 in December. It announced in March that it had also started trials on 6,750 children between the ages of 6 months and 11 years of age.