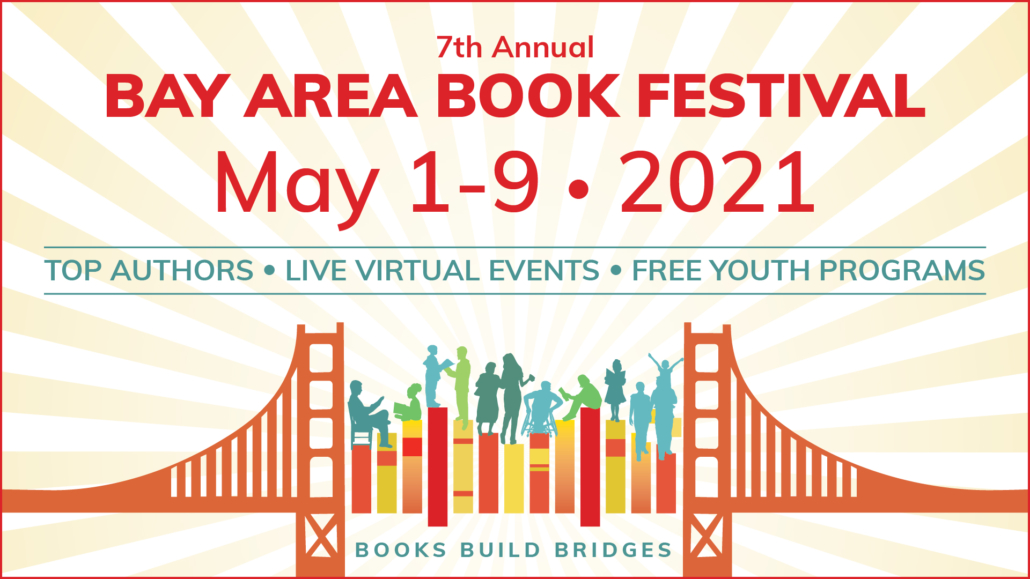 The seventh annual Bay Area Book Festival, going all virtual for the second year in a row, launches its nine-day run on Saturday and is such a high-wattage affair, attendees may want to consider donning sunglasses to tune in.

The festival has 11 programs for adults in the lineup, three of them free to attend, and an ancillary run of eight free programs for younger readers, including a 3:30 p.m. Sunday session with hip-hop expert Jeff Chang, whose “Can’t Stop Won’t Stop” book on the history of the genre has just been adapted for young adults. Radio personality and hip-hop pioneer “Davey D” Cook joins Chang in conversation.

Two of the three free programs will open and close the festival. Mother Jones journalist Jamilah King interviews activist attorney and famed TED talk veteran Valarie Kaur about her book, “See No Stranger: A Memoir and Manifesto of Revolutionary Love,” at 7 p.m. Saturday in a session subtitled “A Radical Vision for Mending Our World.” As is the case with all the programs, registrants can submit questions when they sign up for the link, and there will be opportunities for live interaction as well.

A powerful trio of Booker Prize-nominated women authors closes out the festival at 6 p.m. May 9 (Mother’s Day), with a panel moderated by Words Without Borders executive director Karen Phillips. Indian author Avni Doshi (“Burnt Sugar”), Ethiopian-American author Maaza Mengiste (“The Shadow King”) and Chilean author Alia Trabucco Zerán (“The Remainder”) are the participants in a session subtitled “An International Roundtable of Dangerous Women Writers.” This is the only one of the sessions that is not live, as the three novelists are appearing from three different time zones.

San Francisco novelists Vendela Vida and Carol Edgarian talk about “The Epicenter of Girlhood” in the third free event at 7 p.m. May 4. Both women have recent novels that feature young heroines in San Francisco settings: Edgarian’s “Vera” takes place during and immediately after the 1906 earthquake and fires, and Vida’s “We Run the Tides” centers on young friends who live in Sea Cliff in the 1990s.

May 6, 7 p.m. “Lager and Love Can’t Pay the Bills” is the wry title of this session with Douglas Stuart, whose Glasgow-set novel “Shuggie Bain” captured the 2020 Booker Prize and has been favorably compared to Frank McCourt’s “Angela’s Ashes.” He’ll discuss the book with author and TED talk speaker Casey Gerald.

May 7, 6 p.m. Award-winning sci-fi novelists Nnedi Okorafor (“Remote Control”) and Jeff VanderMeer (“Hummingbird Salamander”) join forces to ruminate about “How to Dream the World You Want.”

May 8, 7 p.m. To be published May 11, “There’s a Revolution Outside My Love: Letters from a Crisis” is a wide-ranging anthology of essays, poems, letters and articles from some of our finest writers from all across America, produced in response to the upheaval of our times and edited by poet Tracy K. Smith and literary critic John Freeman. Smith and fellow poets Camille Dungy and Reginald Dwayne Betts take part in a “Mourn, Heal and Take to the Streets” discussion moderated by Ismail Muhammad.

May 9, 1 p.m. “A Matter of Death and Life” is the title of the memoir world-renowned psychiatrist and author Irvin Yalom co-wrote with his late wife, Marilyn, recounting the 65th and last year of their marriage as she was dying of cancer. Joining Yalom to talk about “Love, Loss and Meaning in Life” is the prodigiously gifted author Joyce Carol Oates.